At first glance, it is hard to imagine that a few decades ago, the small town of Tskaltubo was the gem of Georgia’s resorts. A sleepy backwater tucked in a valley roughly 240 km from capital Tbilisi, it is estimated Tskaltubo hosted hundreds of thousands of Soviet tourists in its heyday.

It was home to nearly two dozen sanatoriums, boarding houses, baths, a research center—even its own direct train line to Moscow. Tiny Tskaltubo, located seven kilometers from the nearest city, was so laden with tourists and riches, locals recall weighing their money with a scale instead of counting it.

“You could find anything here, anything produced in the Soviet Union,” noted local resident Rezo Mushkudiani, 64, adding that even the trees in the forest were otherworldly—talented landscapers shaped them into animals like bears and rabbits.

Its main prize, however, was the radon-infused water gushing from its mineral springs—known as “waters of immortality”—which coursed through 22 sanatoriums and treated hundreds of thousands of Soviet elite every year.

While the springs and, to an extent, sanatoriums remain, for many locals, the town’s glory days are firmly in the past.

A Soviet-era mosaic at Aia, a local sanatorium.

Nestled in the foothills of the Greater Caucasus Mountains, Tskaltubo is near the city of Kutaisi and Sataplia Nature Reserve. Its springs were first recorded in the 7-9th century, according to Georgian historian Niko Berdzenishvili, but the area was not recognized as a resort until the 1930s, when the Soviet government selected it for a large park. Over the decades, more sanatoriums, boarding houses, baths, and a research center were built around the park. As the water cures gained popularity with the Soviet elite, Tskaltubo became a center of production in its own right, from farming to mining. 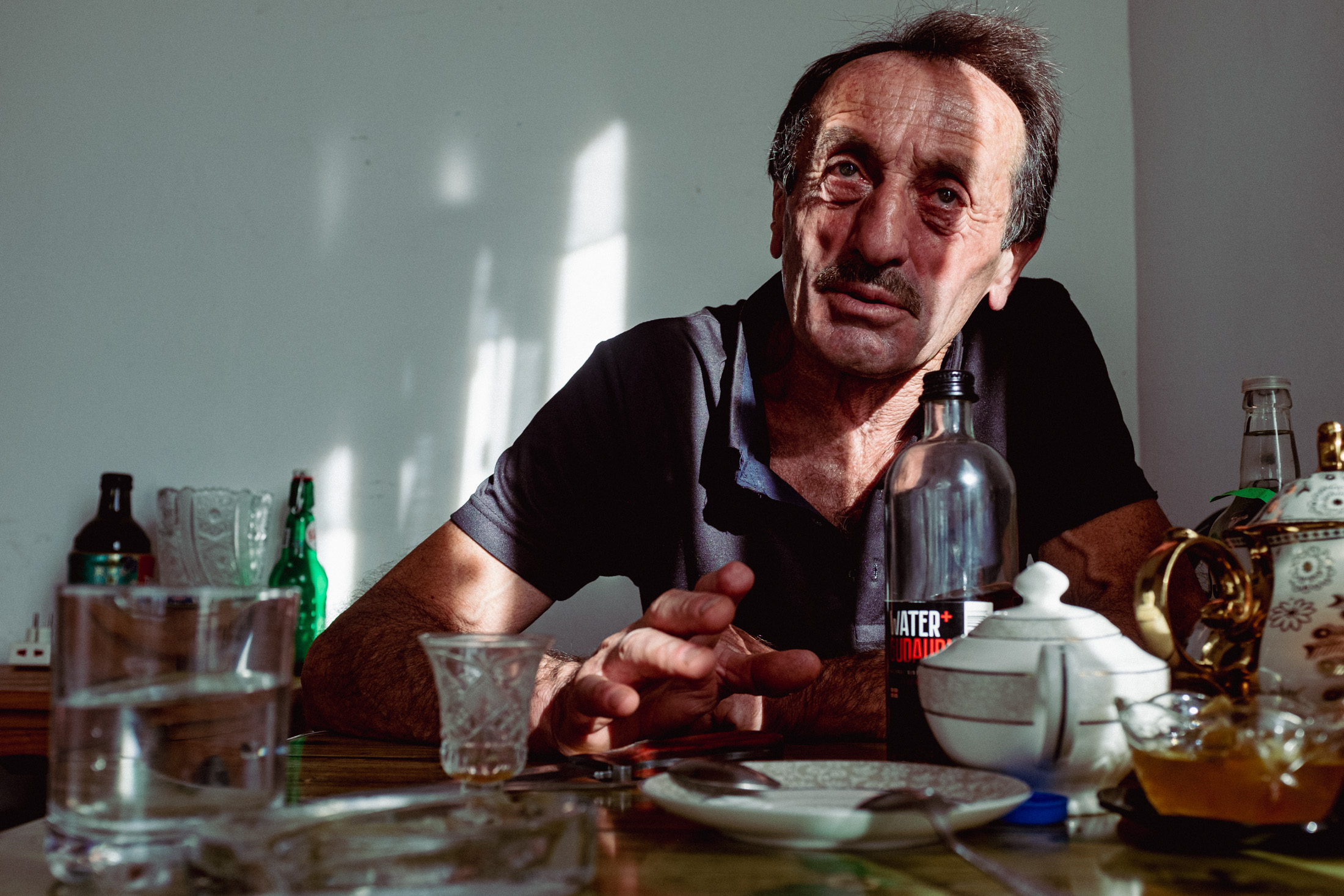 “In addition to the healing waters, people saw a world that was different than anything else out there,” recalled Rezo Mushkudiani, 64, a local resident who worked in one of the sanatoriums when he was a student.

“This city was full of love… Full of restaurants, cinemas, entertainment, and dancing halls-every sanatorium had one. People from around the surrounding towns came to Tskaltubo to spend their evenings and every night you could see people walking out of town, going back to [neighboring cities] Kutaisi, Khoni, and others.”

The trains ran daily, bringing more vacationers than the sanatoriums could house, so locals often ended up renting out rooms as well.

Rezo recalls it as a time when everyone had more than enough—there were plenty of jobs and plenty of money.

“People from all over the Soviet Union used to come here for fabric, chandeliers, spices, preserves, jams, tea, juices, cognac, wine, shoes, washing powders, and a lot of other stuff,” he said.

“We didn’t know where to put the products and where to store them, we had so many. For example, there were tea plantations as far as you can see until the foot of the mountains. There were three or four tea factories in Tskaltubo alone--our tea was considered one of the best teas... It was very popular and well-known during the Soviet period.”

And then everything stopped.

After the collapse of the Soviet Union in 1991, the resort languished without the steady stream of guests. And then, following the 1992-1993 Abkhaz-Georgia war, an estimated 1200 displaced Georgian families from Abkhazia were sheltered in many of the sanatorium buildings. The move, which was supposed to be temporary, lasted 30 years.

Those decades were dark ones for the locals and displaced families.

“We came here with nothing, and we arrived at… this place mired in poverty, when we arrived here, the situation was very bad, the people were hungry,” recalls Dali Zhvania, who fled Abkhazia during the war and was resettled in Tskaltubo.

“There were zero opportunities.”

Rezo remembers it as a time when the local residents and the displaced faced the same challenges.

“People were used to a happy life and suddenly there was unemployment, all the employed people, in the resort, in agriculture, in the factories, lost their jobs. Then many left. It was no longer worth living here,” he says. “We went through a lot with this city: once it was very beautiful but it became hard to survive here.”

“As soon as they got the chance, a lot of people went abroad to support their families. It is mostly elderly left now; the young went to Italy, Greece, Germany ... Otherwise, I don’t know what would have happened here,” notes Dali.

Successive governments have planned for Tskaltubo’s revival, although few have materialized into concrete results. For instance, in 2012 former President Mikheil Saakashvili promised Tskaltubo would become the top resort destination in Europe in four years. But, by 2015, only the central park had been rehabilitated as part of a co-financing project between the Municipal Development Fund and the World Bank.

Almost all the displaced families were finally given new apartments in 2021-2022, allowing them to leave the sanatorium buildings—a huge step toward the Georgian Dream government’s 2022 plan to sell the Soviet-era buildings to developers as part of a large investment project, New Life of Tskaltubo. To date, 14 sanatoriums have been put up for auction and two have been sold.

“I still have hope for Tskaltubo, but it requires a lot of money to revive the town to its old greatness,” Dali says. “If they employ the population and get people back here, then the rebirth will begin, but the streets are empty now…there is no one left, mostly only old people.”

This photo story was prepared with support from the Friedrich-Ebert-Stiftung (FES) South Caucasus Regional Office. All opinions expressed are the author’s alone, and do not necessarily reflect the views of FES or Chai Khana.

The networking event and the mentorship of the fellows was supported by the Federal Foreign Office and the Civil Society Cooperation program, implemented by the Deutsche Gesellschaft e.V.

#Tskaltubo #glory days #Tskaltubo’s revival #New Life of Tskaltubo. #Georgia #Memories
DONATE TO CHAI KHANA!
We are a non-profit media organization covering the topics and groups of people that are frequently ignored by mainstream media. Our work would not be possible without support from our community and readers like you. Your donations enable us to support journalists who cover underrepresented stories across the region.
DONATE NOW

A 2021 study of school children in Georgia found that 77 percent of the children are always (35%) or sometimes (42%) hungry when they come to school.

While activists note the country is making progress fighting the domestic violence, a deadly mix of cultural taboos and limited resources complicate the reform.

Persistent and present despite progress: The problem of domestic violence in Georgia