I am a native of Baku, the capital of Azerbaijan. I remember a time when there were big trees in the streets and yards--open spaces with trees—most of which were cut down over the past several years to make way for new buildings.

For instance, there was a huge pine grove at Tofiq Bahramov Stadium and an olive grove in Ahmedly, both of which are partly or completely lost now due to wider roads, the construction of ADA University and addition of a huge artificial lake in Dada Gorgud Park.

Bakuvians are losing green space and residents are becoming more aware of the issue—and the impact on their health and wellbeing. Cities should have 50 square meters of green space per resident, according to World Health Organization standards. The global average for cities, however, is less than half that—21 square meters per person.

Over the past 30 years, the population of the capital has doubled, and the green area has halved. Between the 1970s and the 1980s, green space tripled in the city, increasing from just 6.2 square meters of recreational green space in the 1970s to 45 square meters in the 1980s. After 1985, the issue stopped being a priority and, as a result, green space was destroyed to make room for shops, cafes, wedding palaces, garages, and villas.

“I moved to Baku in the 1990s and fell in love with Baku the first day I arrived because there were green streets on all sides. I used to take a tram [no longer exists] from Azneft Square. There is a big difference when comparing Baku today with that time,” recalls Rovshana Babayeva, an eco-activist.

Frequent discussions about the loss of green space in Baku inspired me to investigate how much of greenery has been lost in Baku over the past two generations. I found photos of central locations—some of locals’ favorite places—at the Azerbaijan Photographers Union (AFB) dating back to the 1950s and 1970s. Using the images as my guide, I sought to photograph those locations from the same angle to see how the green space has changed.

The end result showed a mixed fate for many places — more buildings in most cases, but also more tree coverage in some areas. Some of the most beautiful landscaping, for instance the Central Park, is due to locals planting trees. Overall, however, environmentalists like Rovshana Babayeva believe the situation in the city is dire.

"Naturally, green areas play an important role in cleaning the city's air. According to various sources, 80 percent of emissions come from cars; therefore along with increasing greenery and creating conditions to increase the import of hybrid cars and electric cars that do not harm the atmosphere—as well as the construction of bicycle lanes for the use of bicycles as an environmentally friendly means of transport—are among our most pressing needs. This work must be done in parallel," added Rovshana Babayeva. 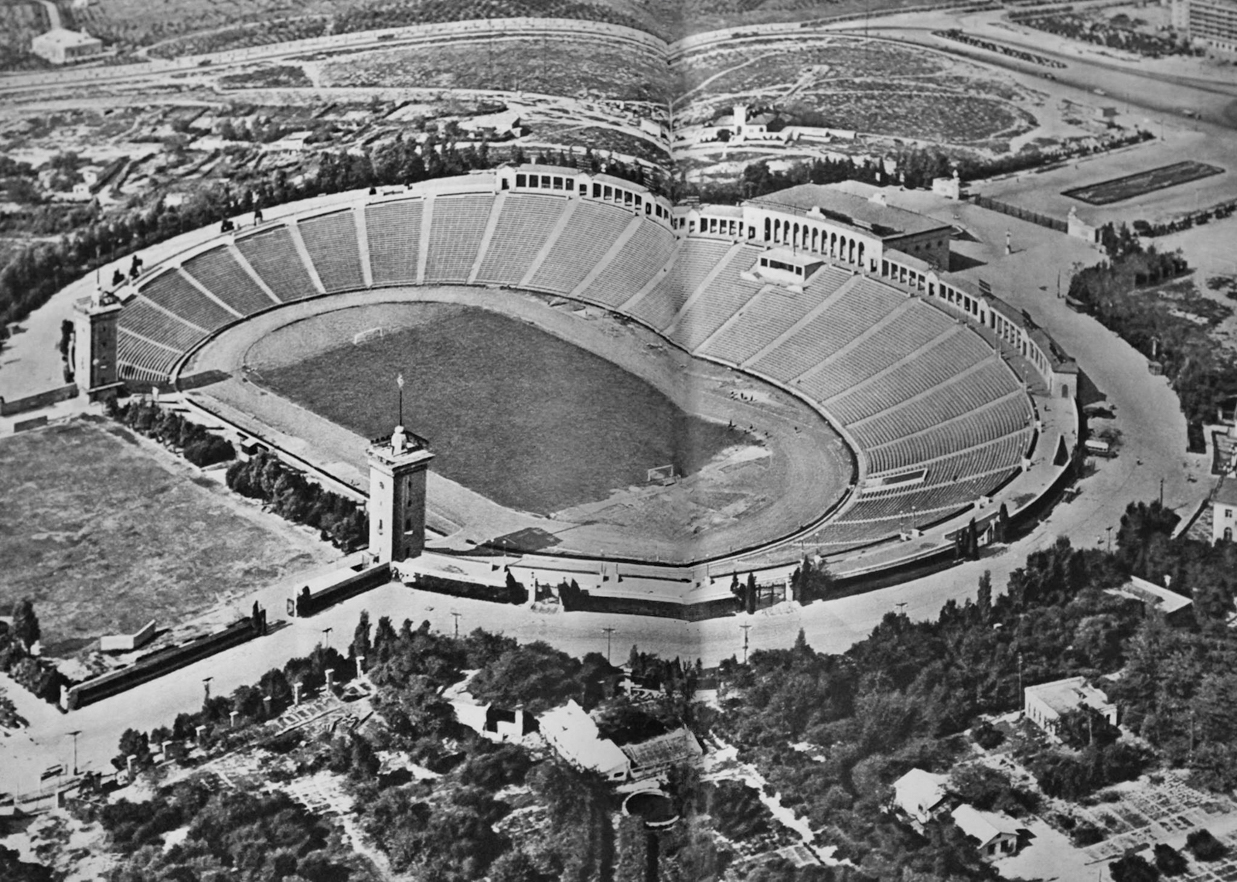 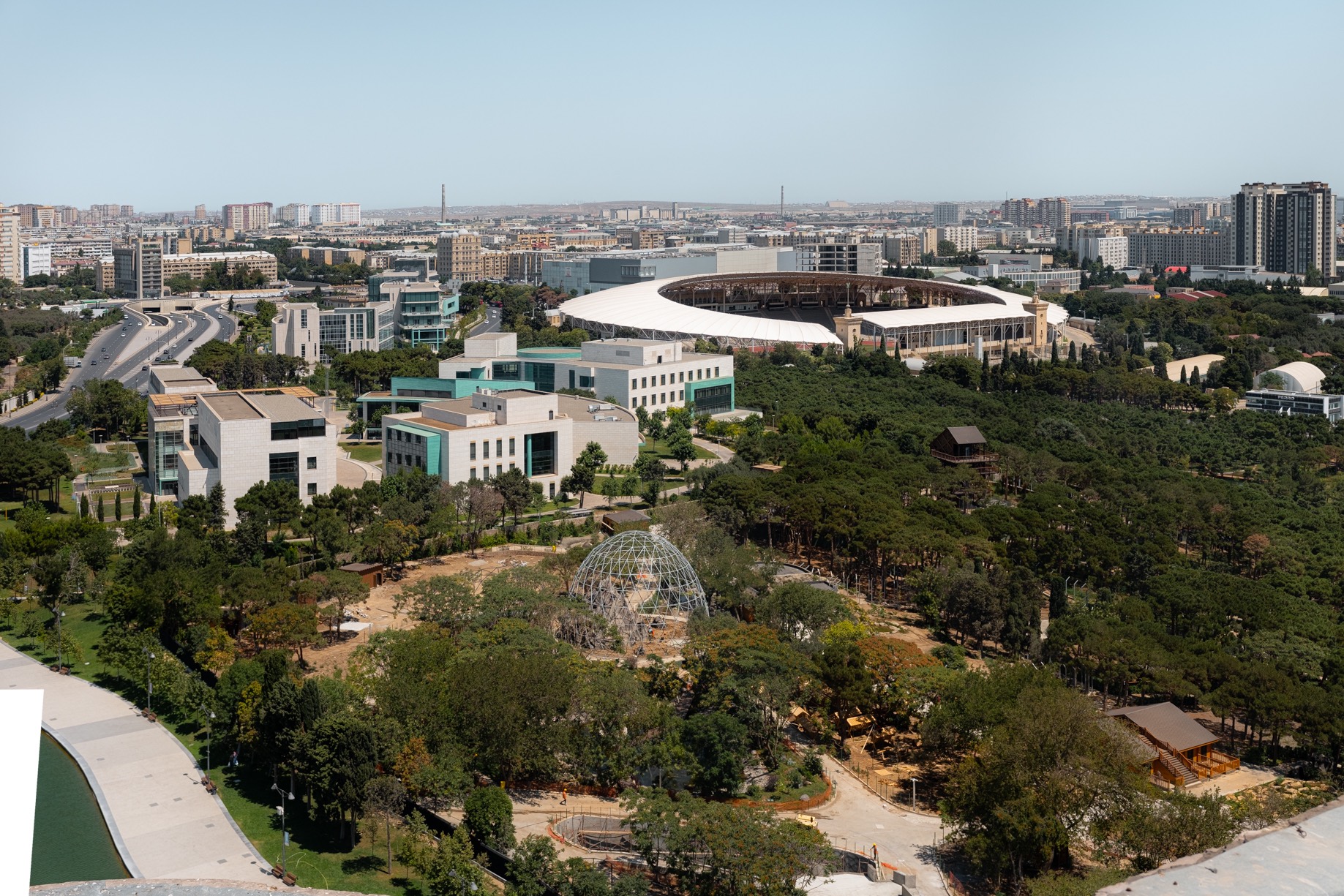 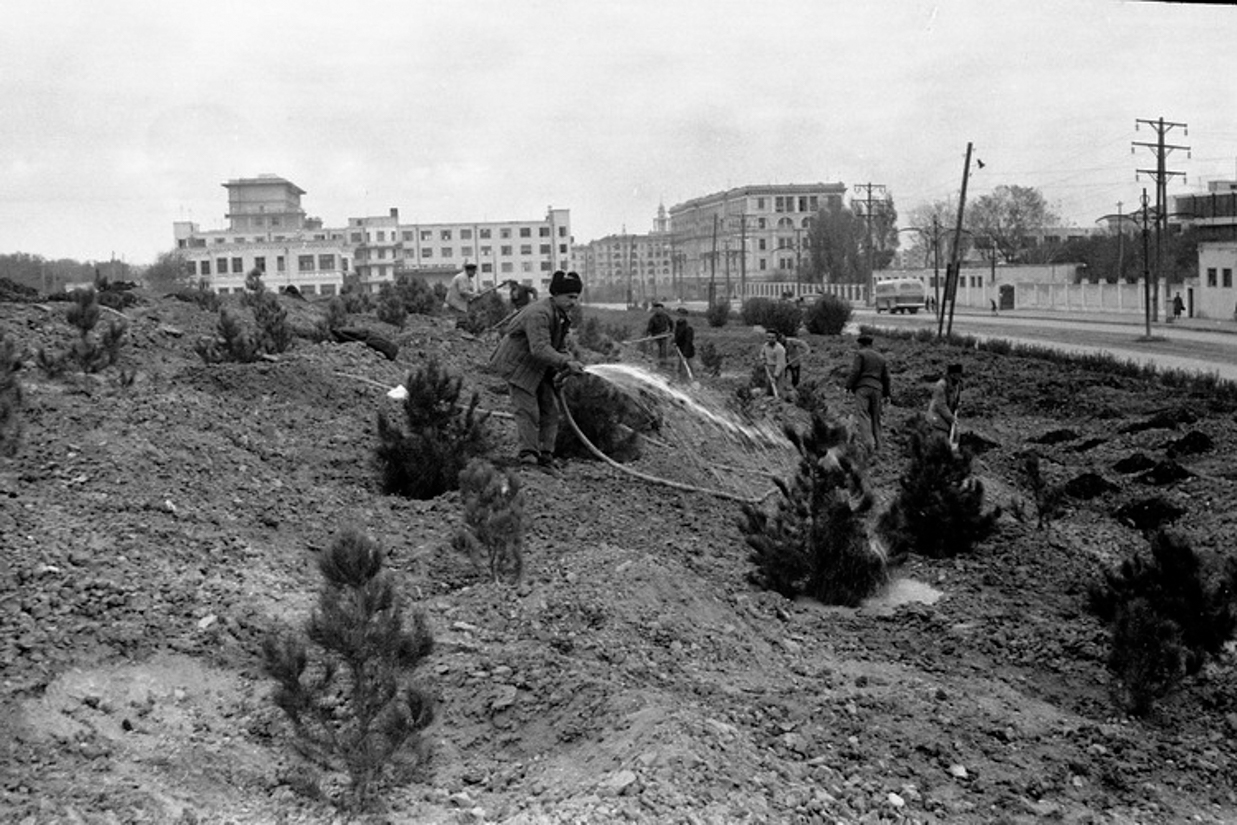 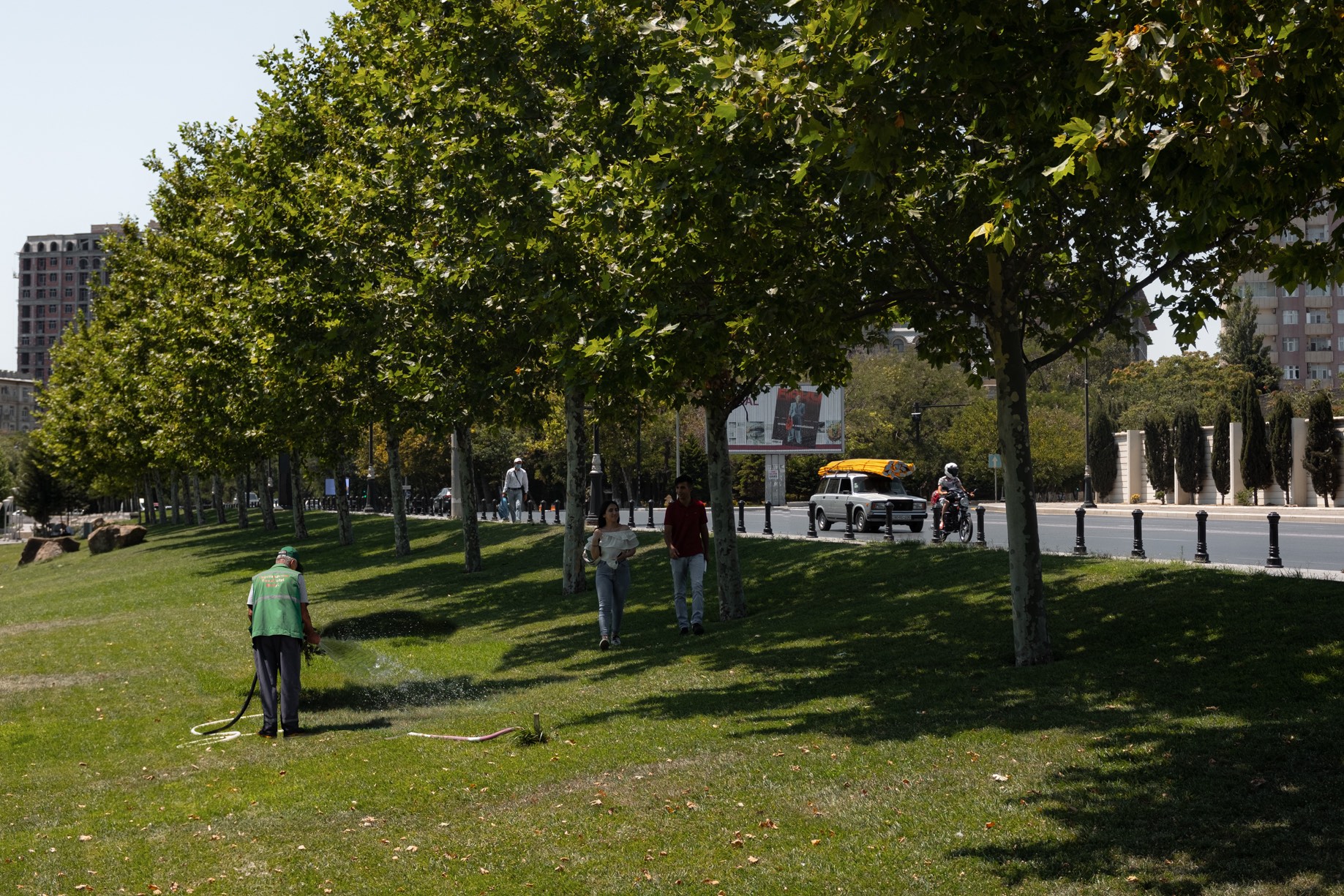 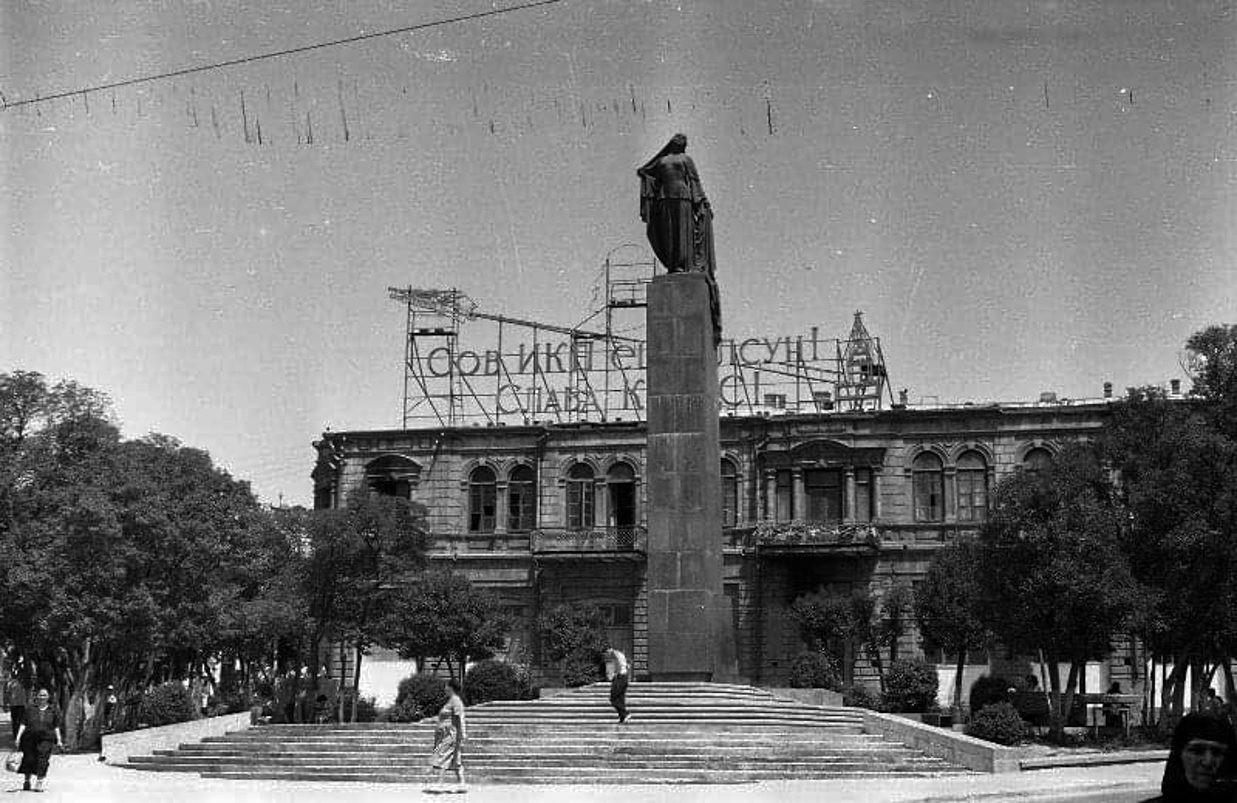 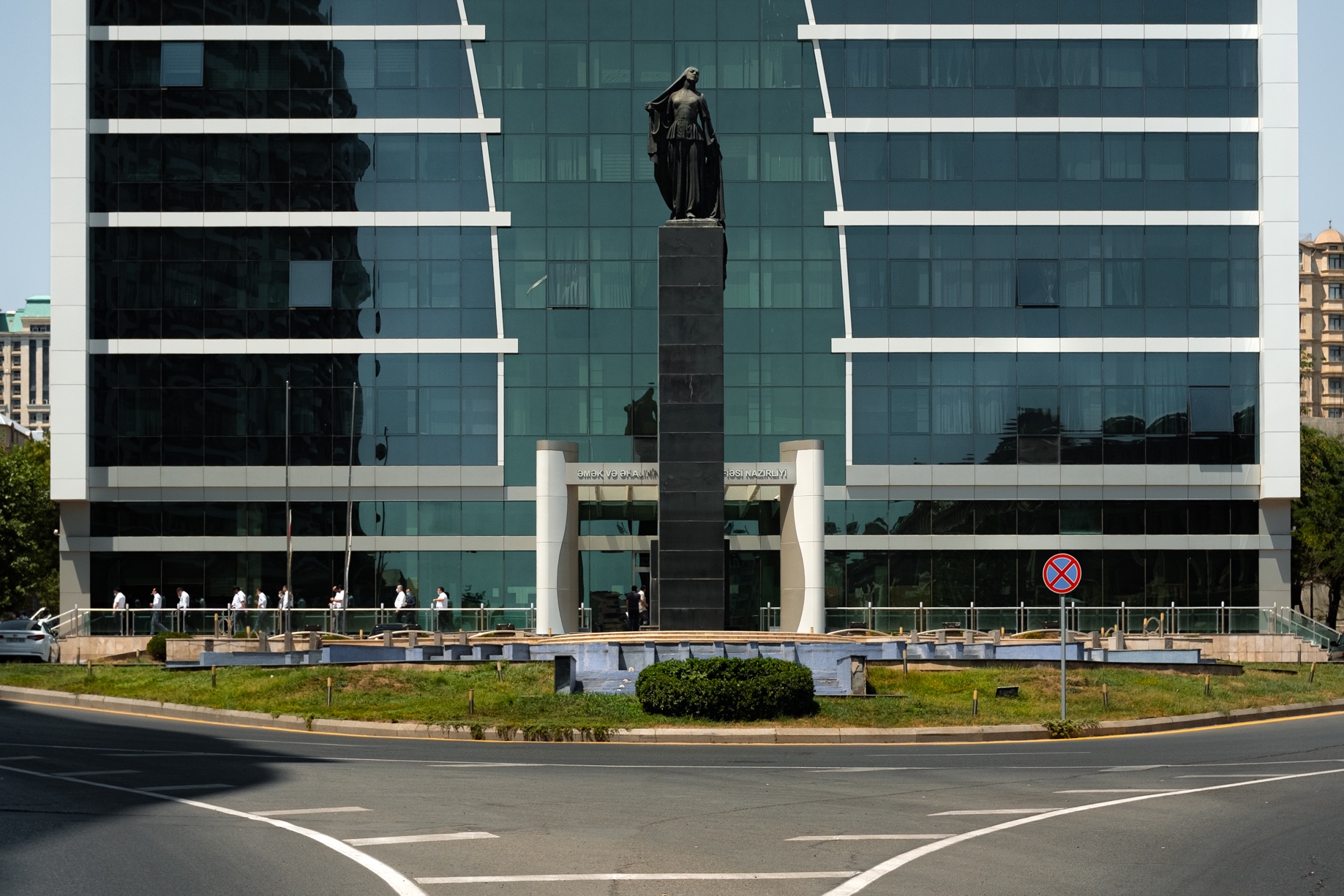 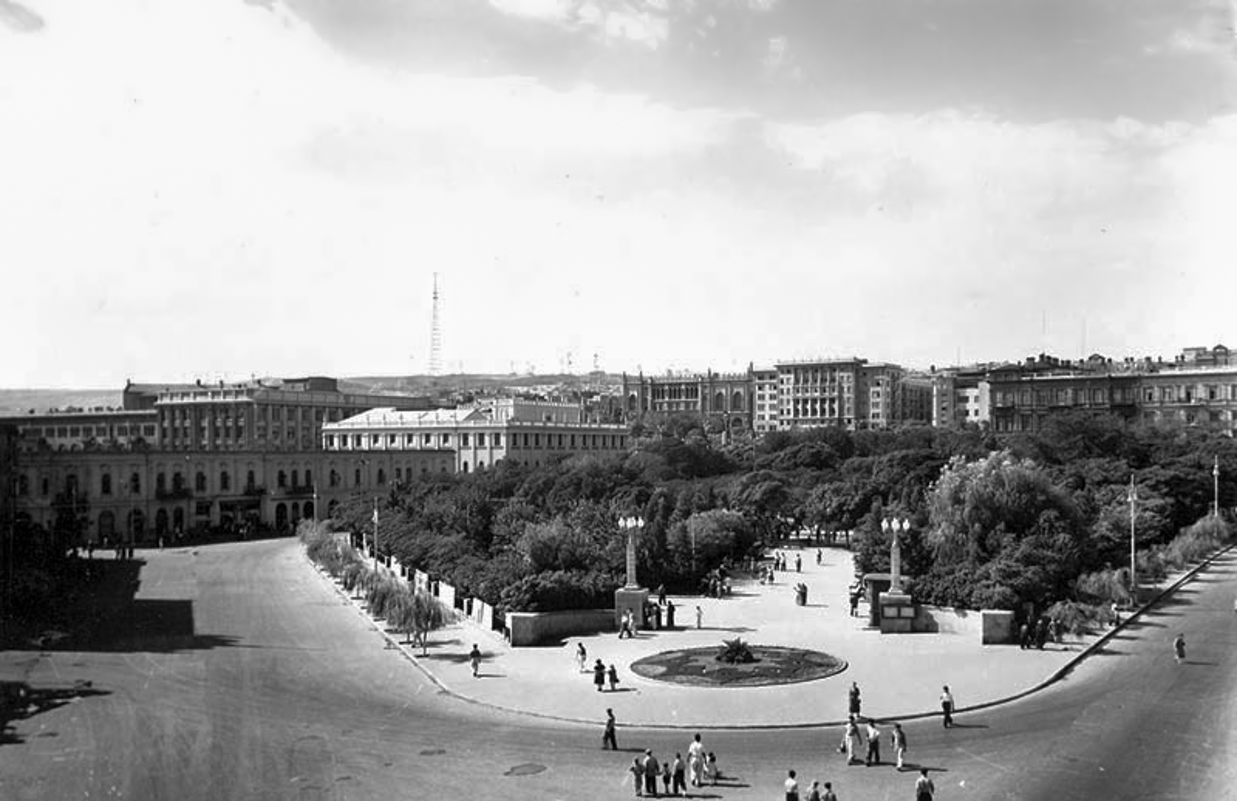 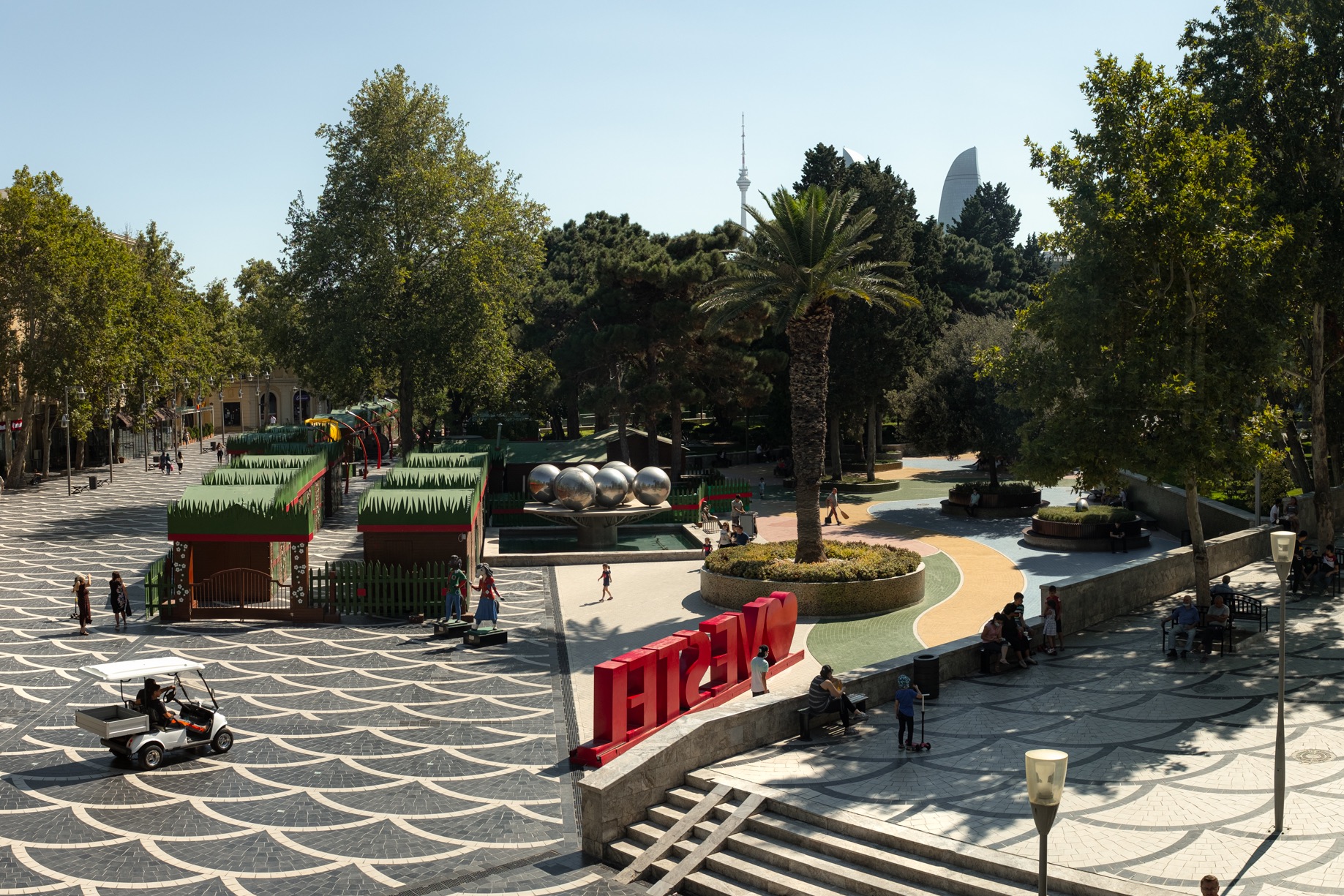 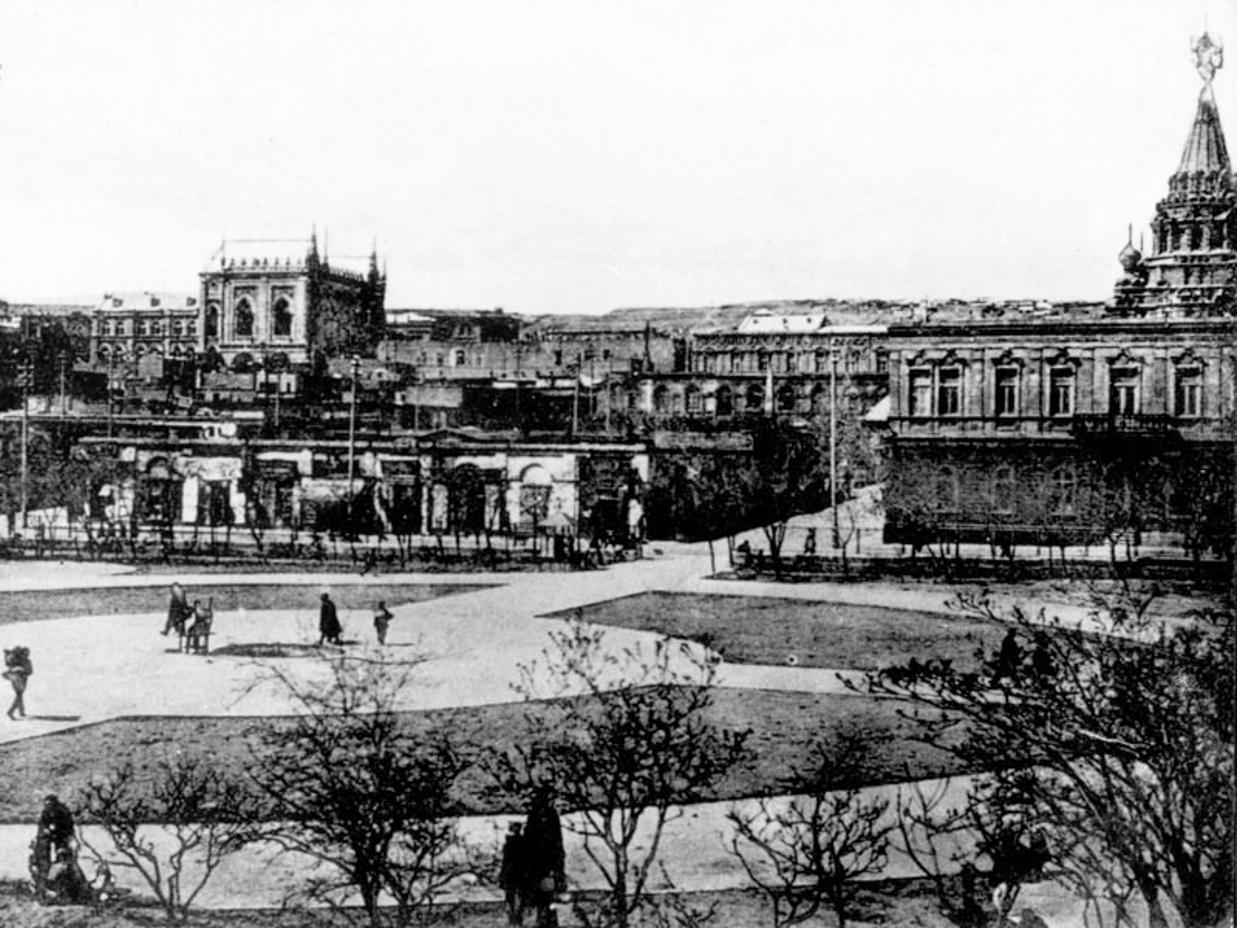 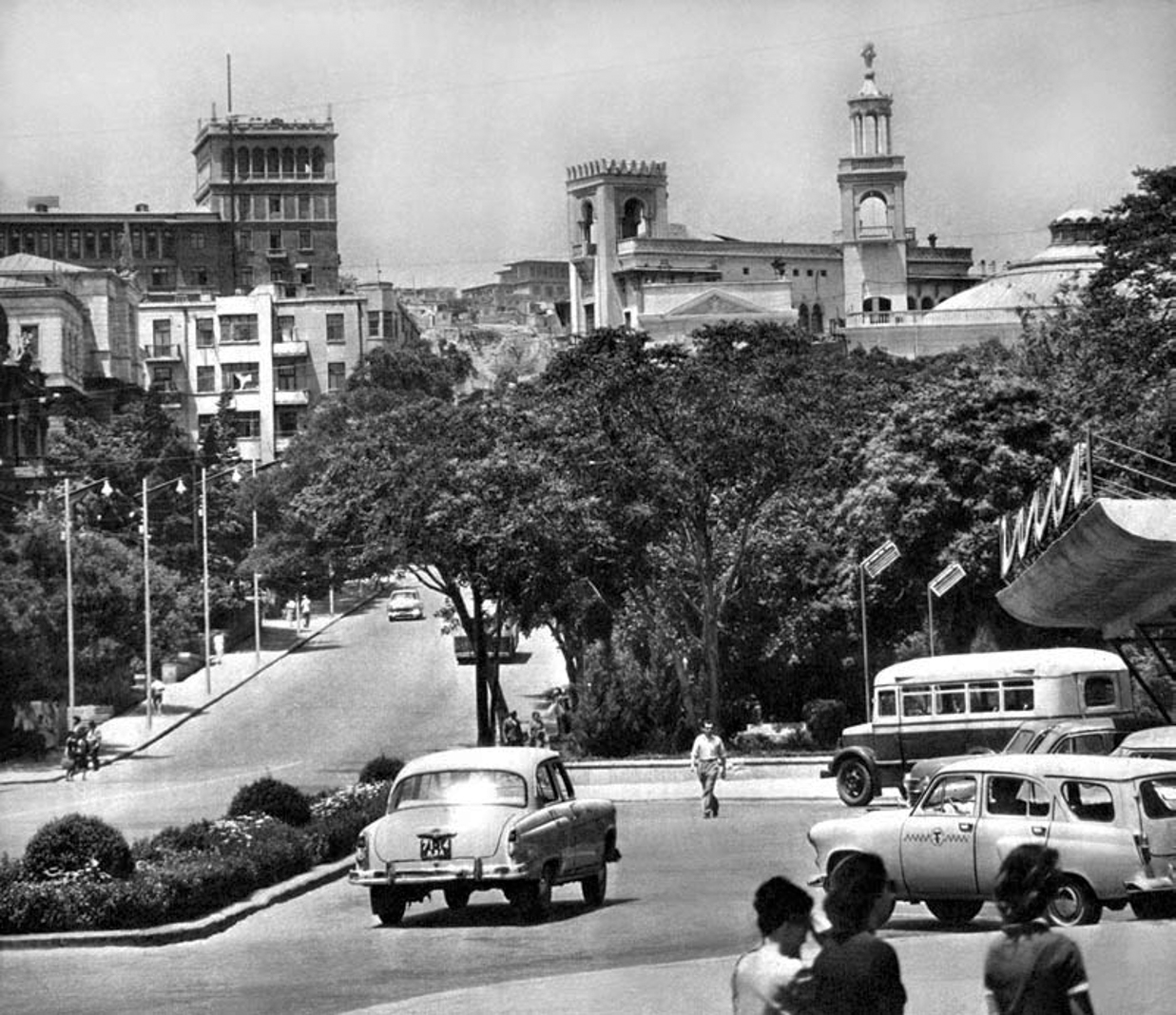 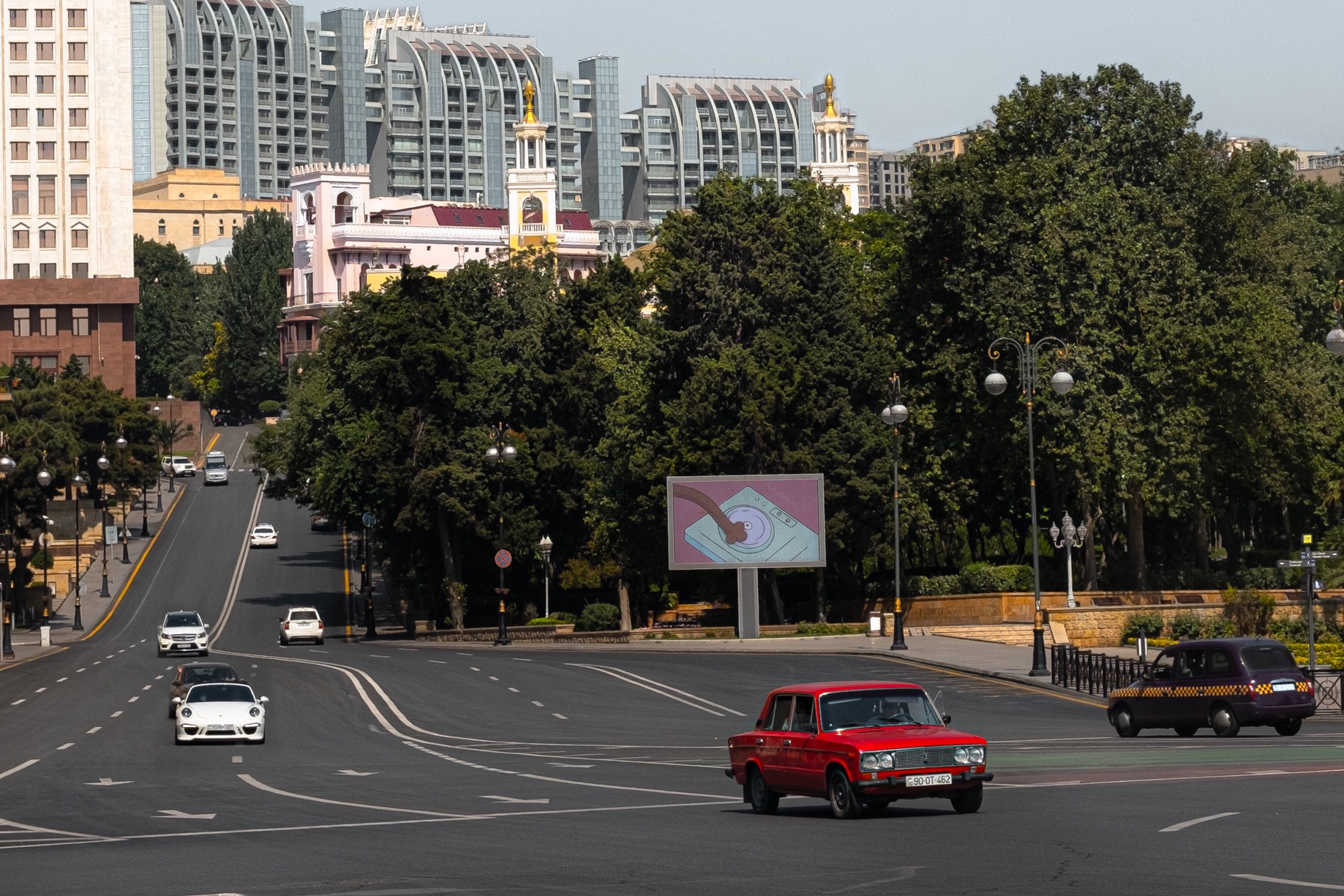 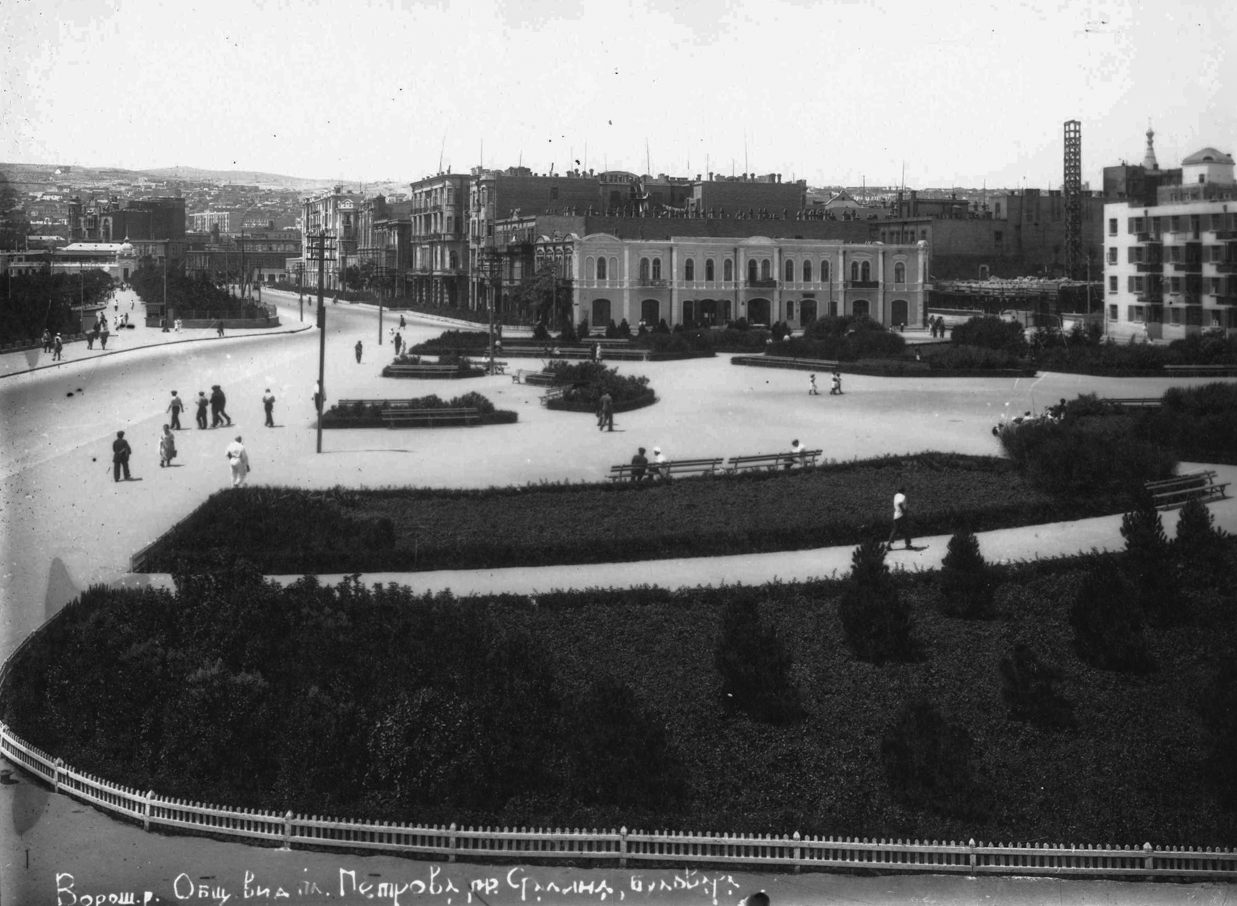 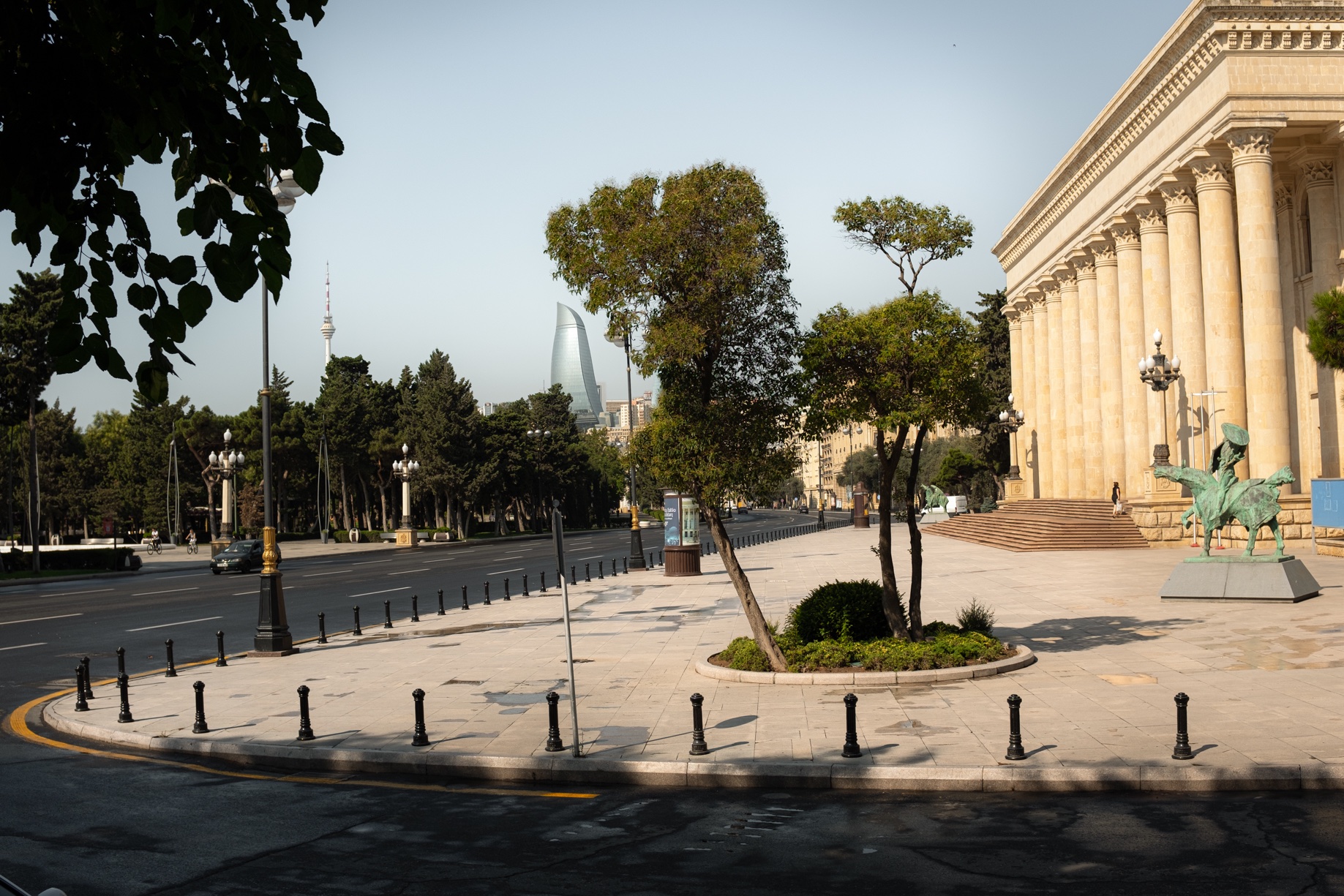 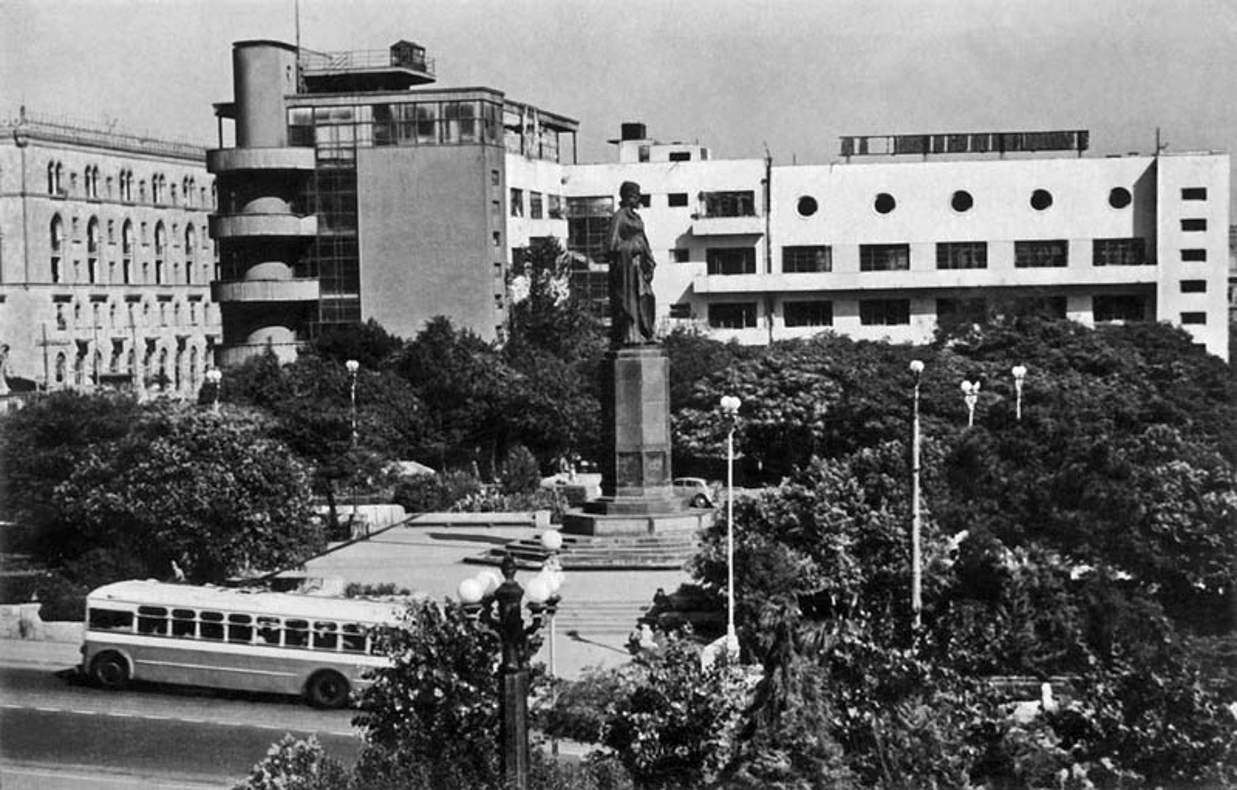 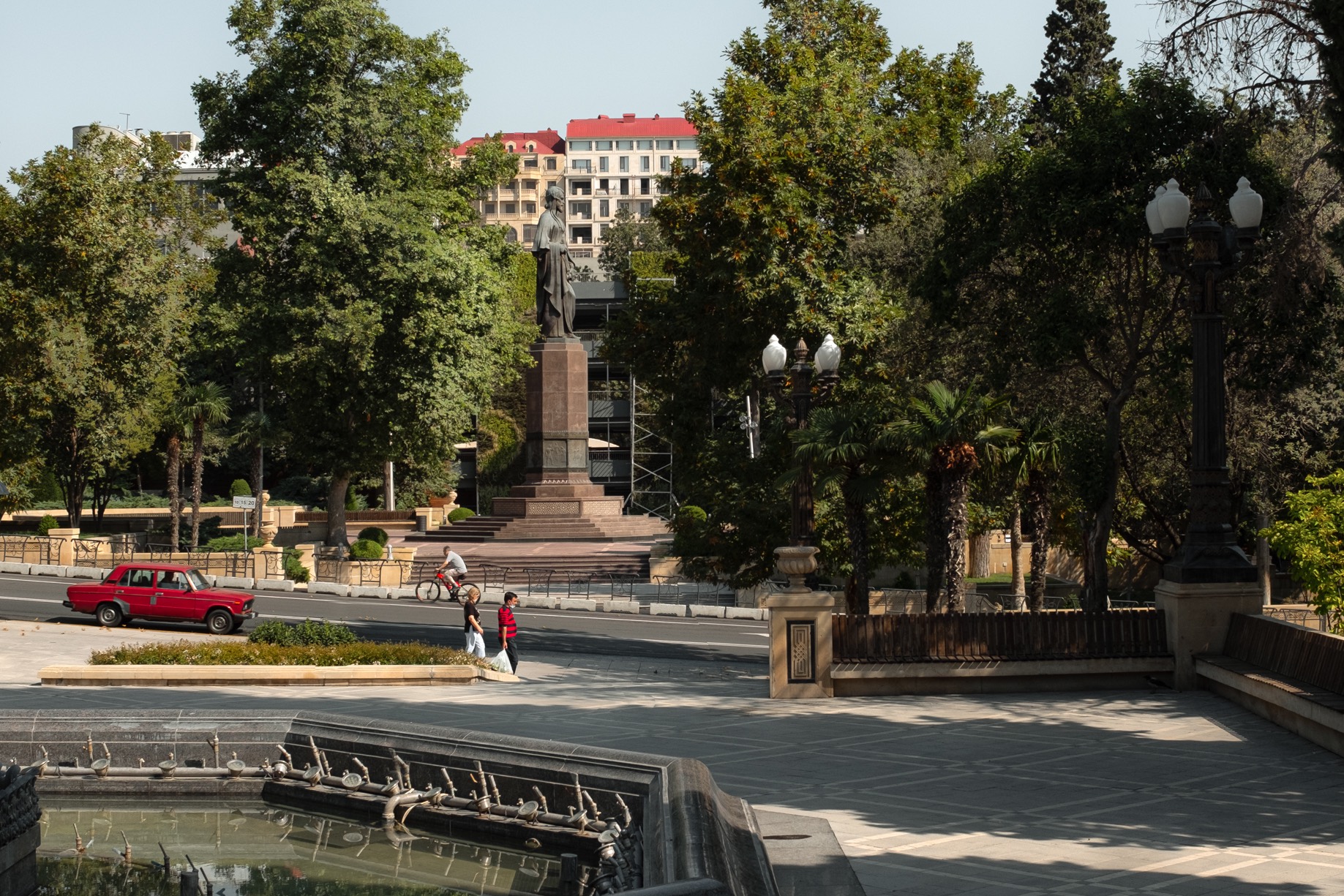 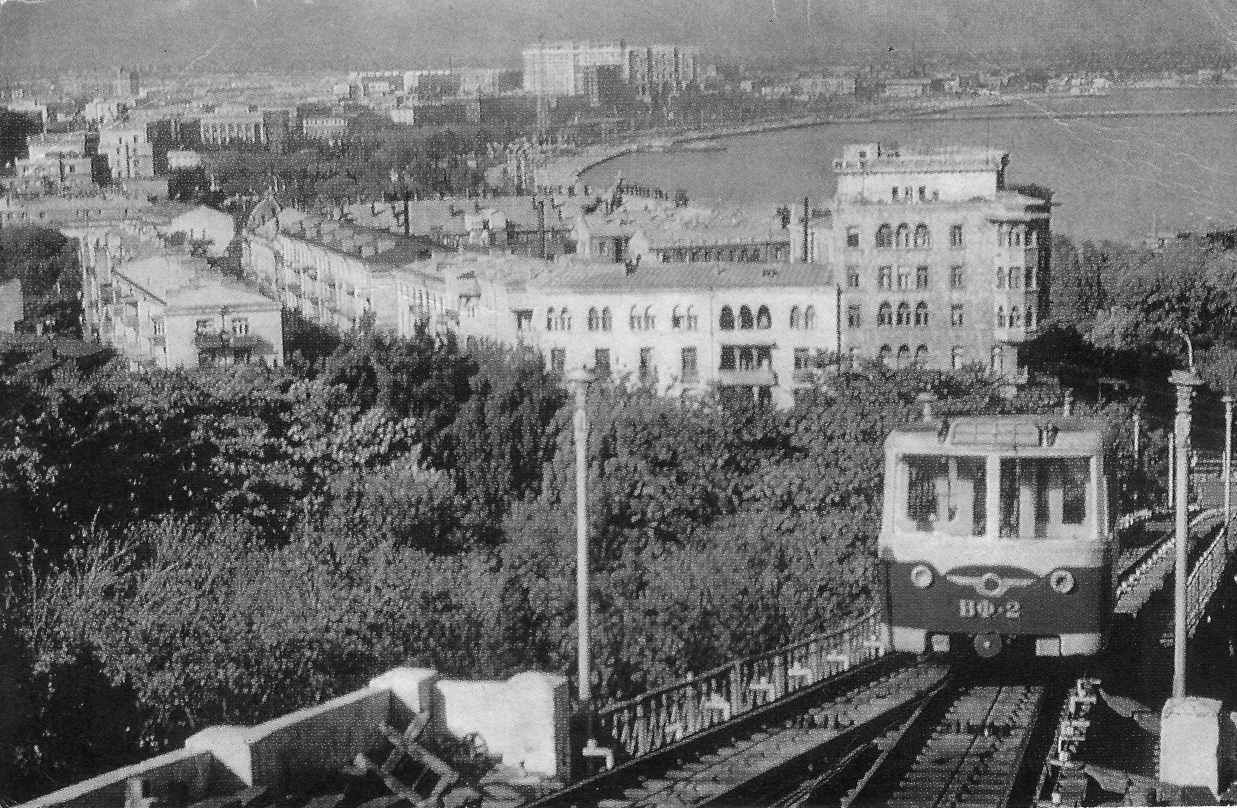 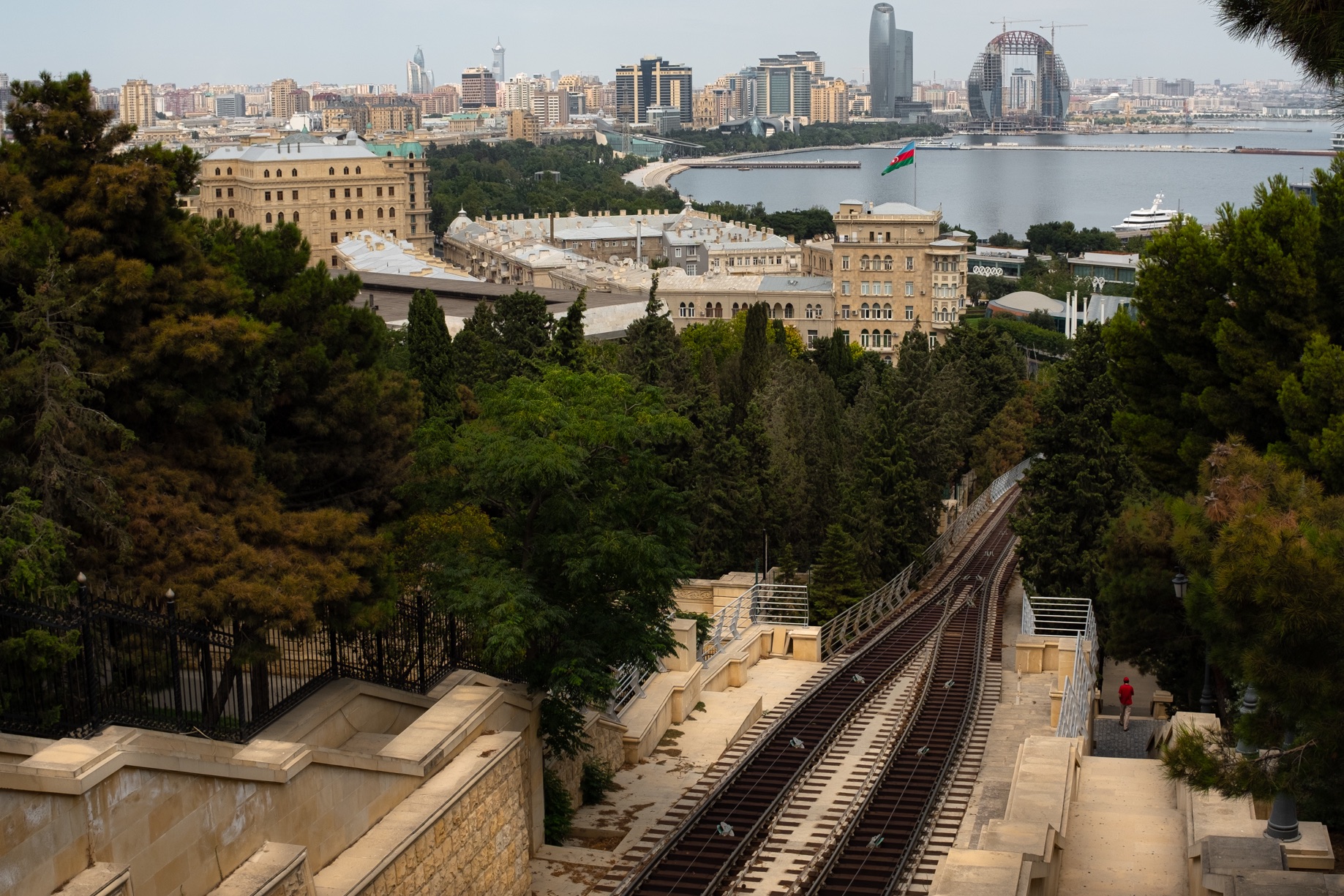 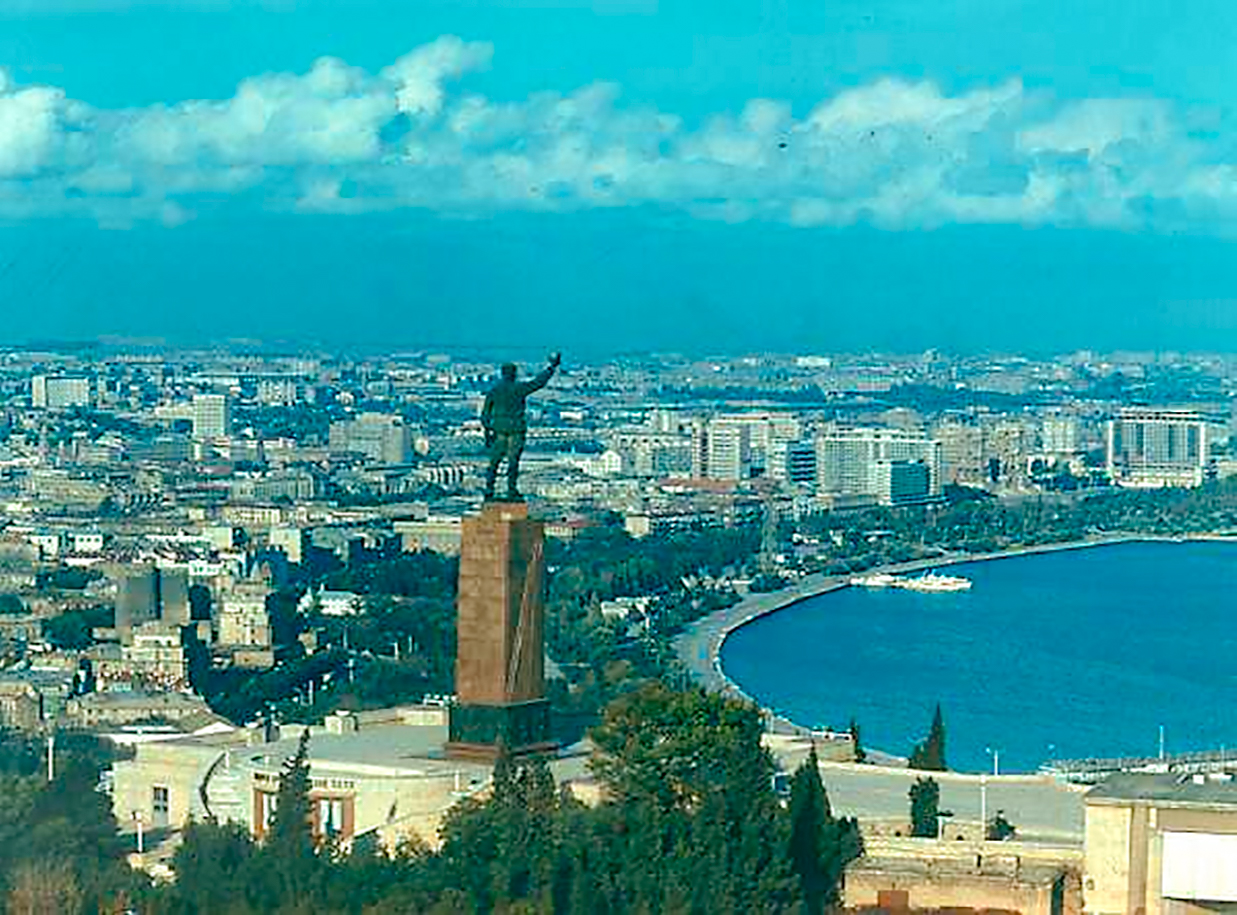 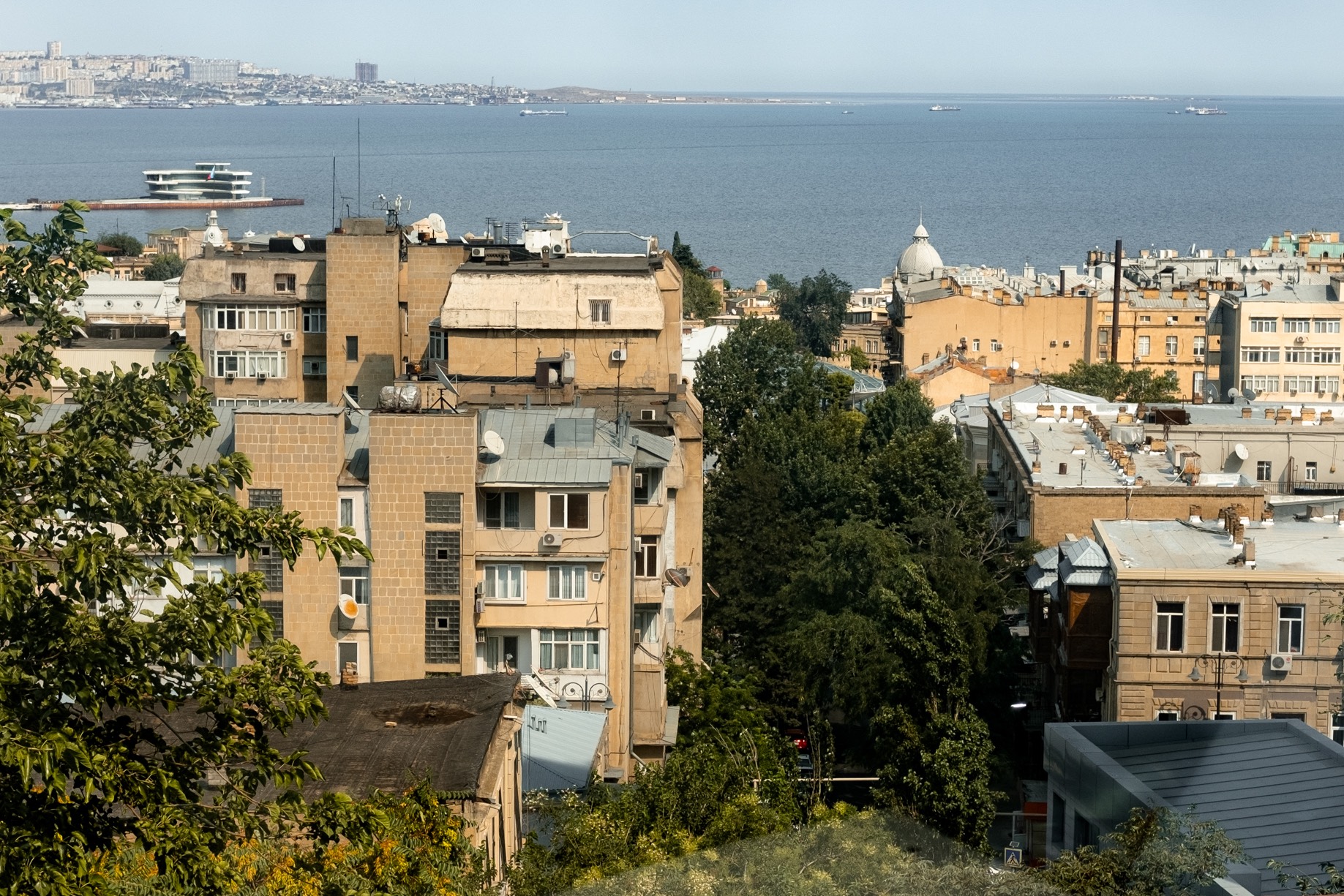 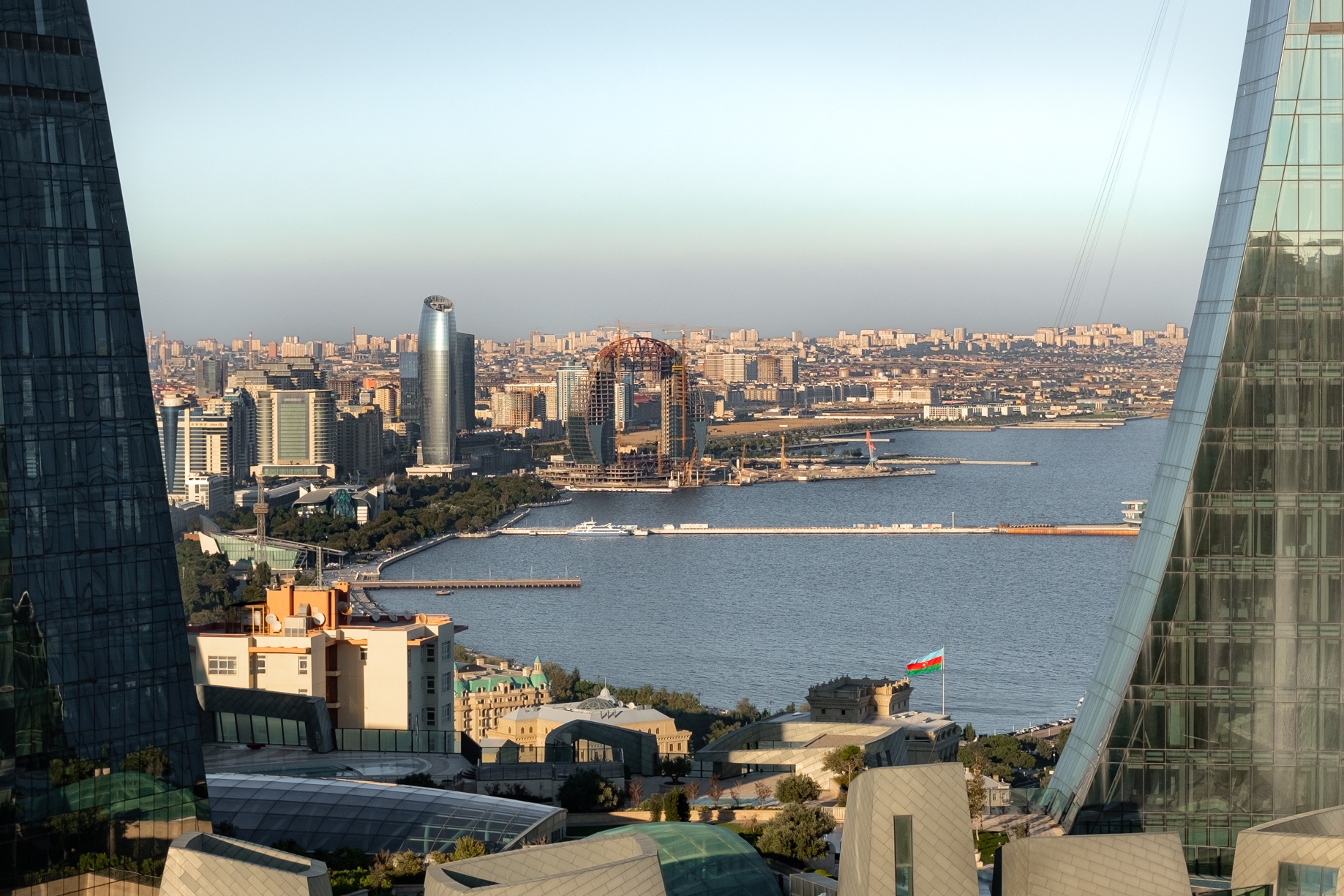 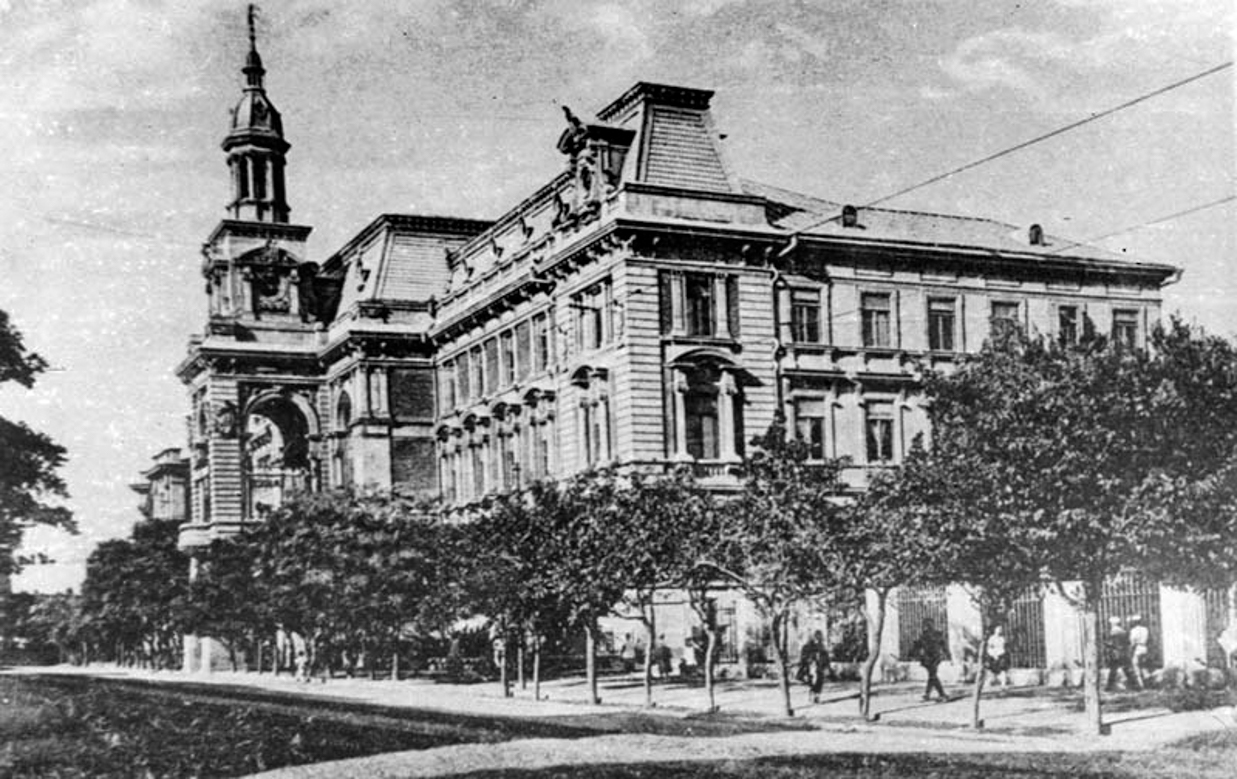 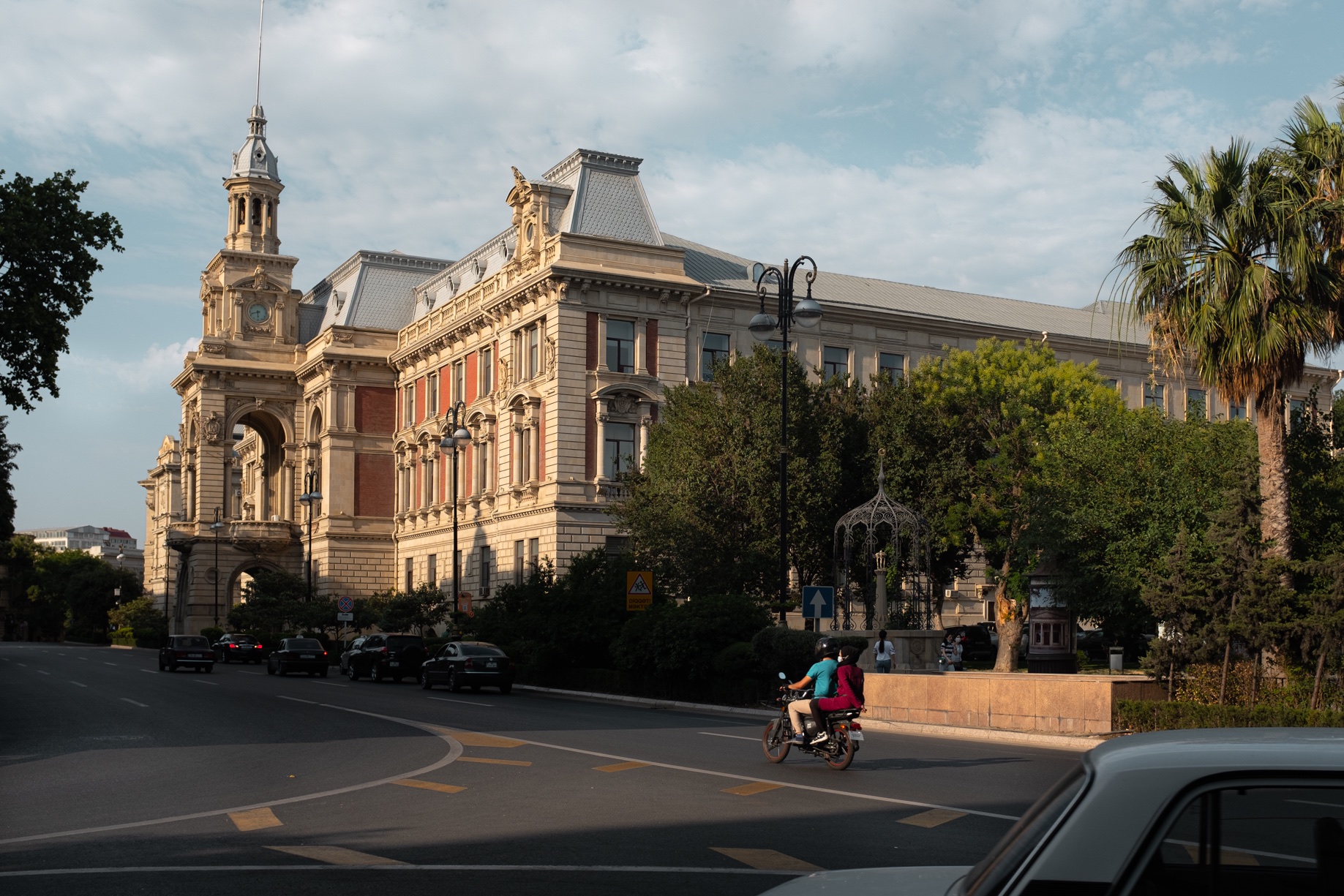 Aerial view of Tofiq Bahramov Stadium and the vacant area around it before the pine grove was planted. Photograph by Isaak Rubenchik, AFB archive
Tofiq Bahramov Stadium, ADA University and the site of the new zoo in 2020.
Planting the pine grove near the stadium. AFB archive
Dede Qorqud Park including newly planted trees, along a recently expanded road in 2020.
"The Liberated Azerbaijani Woman" sculpture, photographed in 1965 at the Federal State Budgetary Institution of Culture in Saint Petersburg, Russia. (ГОСКАТАЛОГ.РФ)
The same statue in 2020, now located in front of the Ministry of Labor and Social Protection.
Karl Marx Park, circa 1950s. The park was locally known as the Parapet or Barren Gardens and was included in the city master plan during an urban overhaul in the 1950s. AFB archive.
Fountain square in 2020. The park was overhauled and expanded in 1984. The palm tree, a gift to the former Mayor Alish Lemberansky, was planted in the park.
View to Nizami monument from Qala Divari, circa 1950. AFB archive
A bus stop on Azneft Square, circa 1950. AFB archive
Azneft Square in 2020.
Petrov Square on Stalin Avenue, circa 1950. AFB archive
The square outside the Museum Center of the Ministry of Culture of the Azerbaijan Republic on Neftchilar Avenue, photographed in 2020. Since its inception, the gallery has been used as an exhibition space. In 1961, the gallery hosted the first exhibition dedicated to the first manned flight into space.
View to Nizami monument from Qala Divari, circa 1950. AFB archive
View of Nizami monument and multi-floor car parking from the Sabir Garden, photographed in 2020.
“With the opening of the Baku Funicular (450m long), a sort of bridge was built between the coastal and mountainous parts of the city. The funicular takes you to the beautiful Nagorniy (Upland) Park to the foot of the grandiose monument to S.M. Kirov. From the observation deck, you can gaze at the panorama of the huge city descending like an amphitheater to the bay. Baku is especially beautiful at night, when millions of lights twinkle and shimmer.” Photograph by A. Zakharchenko (Tourist)
The funicular railway and Baku city bay in 2020.
Baku bay and the monument to S.M. Kirov, circa 1960. Photograph by Isaak Rubenchik, AFB archive
Baku bay, circa 1980. Old advertising photograph
The funicular railway and Baku city bay in 2020.
View of Baku bay through the Flame Towers in 2020
The Baku City Duma. The foundations of the building were laid in May 1900, designed by Polish architect Jozef Goslawski. AFB archive
The building is now known as the Baku City Executive Power, photographed on Istiglaliyyet Street.
#Baku #Cities
DONATE TO CHAI KHANA!
We are a non-profit media organization covering the topics and groups of people that are frequently ignored by mainstream media. Our work would not be possible without support from our community and readers like you. Your donations enable us to support journalists who cover underrepresented stories across the region.
DONATE NOW

For vulnerable groups, the police are often more bully than protector.

Despite barriers to travelling to Azerbaijan, Baku has become a popular stop for people escaping the Russian war in Ukraine.

Finding sanctuary from war in Azerbaijan

It is difficult for Nargiz Safarova to visit her former Sovietsky neighborhood since the building where she lived for over 40 years was torn down.

Since the dust settled