Can choreography be the next great frontier for A.I.?

Today, digital programs can independently generate original artworks and even predict dance movements. Creativity has always been seen as something unique to the human mind, but with the latest developments in artificial intelligence, is that still true? Can we consider A.I.- generated work as art? What is the role of A.I. in the creation process? What is the future of A.I. in art?

Modern scientists believe creativity is not some mystical process that is beyond scientific study but rather something that can be investigated and simulated. So, from a technical perspective, there is no real distinction between art created by a human and that produced by A.I., which by analyzing a certain amount of data, can generate new and original works based on the aesthetics it learned. And so we might say that in the arts, A.I. is no longer seen only as a tool for creators, but rather a separate creative entity and creative collaborator.

However, we know that the artwork is not only a final ‘outcome’ of the creative process that is based on data of ‘previous experiences.’ There is a whole process of production, composition, creative storyline and representation—and considering that A.I. cannot do so, we can say that humans have not entirely lost the role of creator.

And even if A.I. is capable of generating new artworks by analyzing previous data, there is also a question of ‘human responses’ – for example the emotional response? The creative process is more than a rational analysis of facts; it is also the irrational emotional response to a thought, a place, an event. It takes intuition and a bit of serendipity. How can it be reproduced by an algorithm?

Take, for instance, dance and choreography. Choreography is the art of designing dance sequences— the movements of physical bodies, that are either improvised or purposefully selected. So, in the creation process of movement, apart from the emotional responses, there is a physical response.

There are different techniques, especially in the contemporary dance field, that have different approaches, but all aim to obtain dynamic body alignment and to improve the body efficiency through imagery, experiential anatomy and reconditioning movement. Some of these techniques also explore the physical body in relationship to others by sharing weight, touch and awareness.

These practices derive physical responses that are expressed through body movement. How can A.I. replicate them—or create original versions of them?

UK-based choreographer Wayne McGregor collaborated with Google Art & Culture Lab to bring this innovative practice into his creative process. During the project, an A.I. a choreography tool was created, which analyzed thousands of videos of Wayne’s work, and, based on that material, predicted totally original movements, which later was formed into a choreographic piece called Living Archive.

In addition to learning thousands of videos about Wayne’s choreography style, the programmers also provided additional material for the system so that it was able to mimic the precise physical signatures of the ten dancers of the company.

Wayne was impressed with the predictions and stated in an article published on Google’s Art&Culture site that “in a way, it's like a massive atlas that allows you to zone in on any one physical movement, or to move through movements across bodies, to make the representation of a body do something that’s never been done before...It’s a brilliant way to organizing physical intelligence that you then use to develop new physical ideas.'' 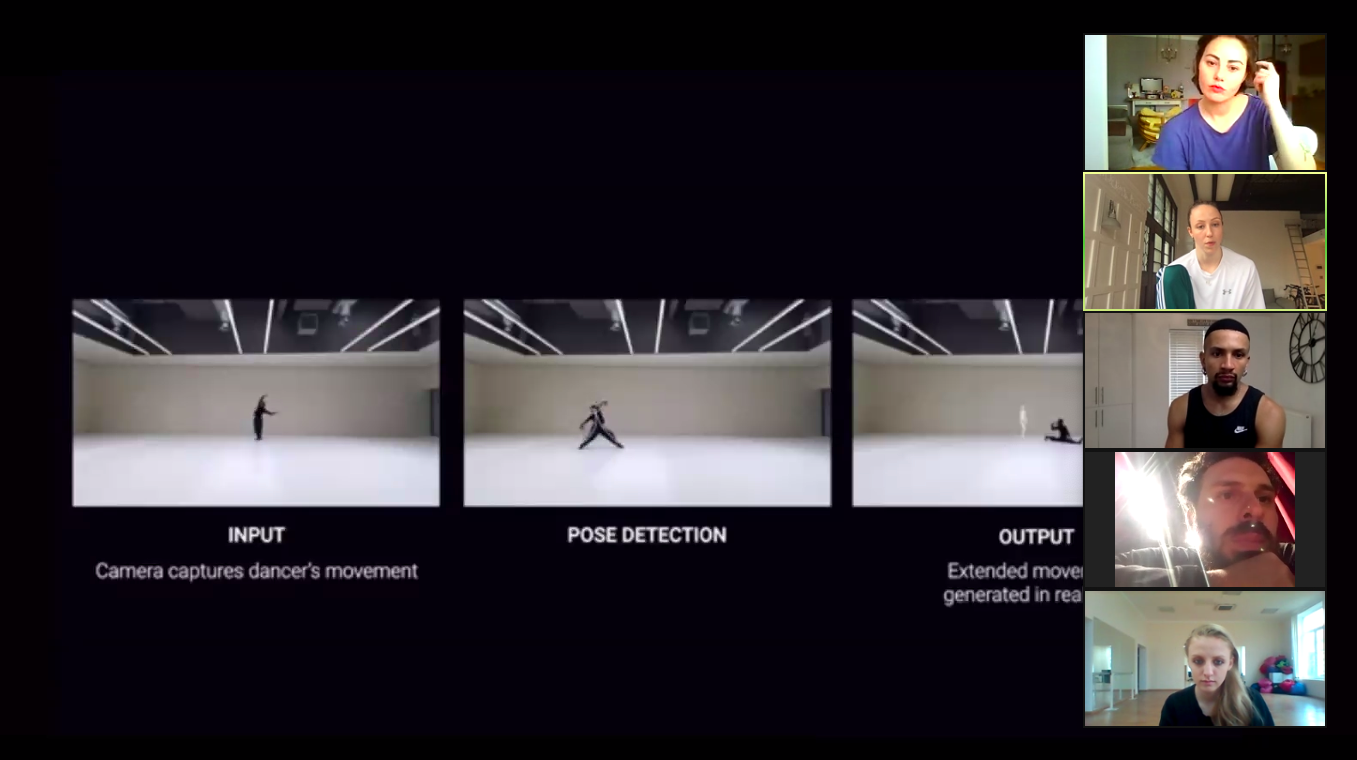 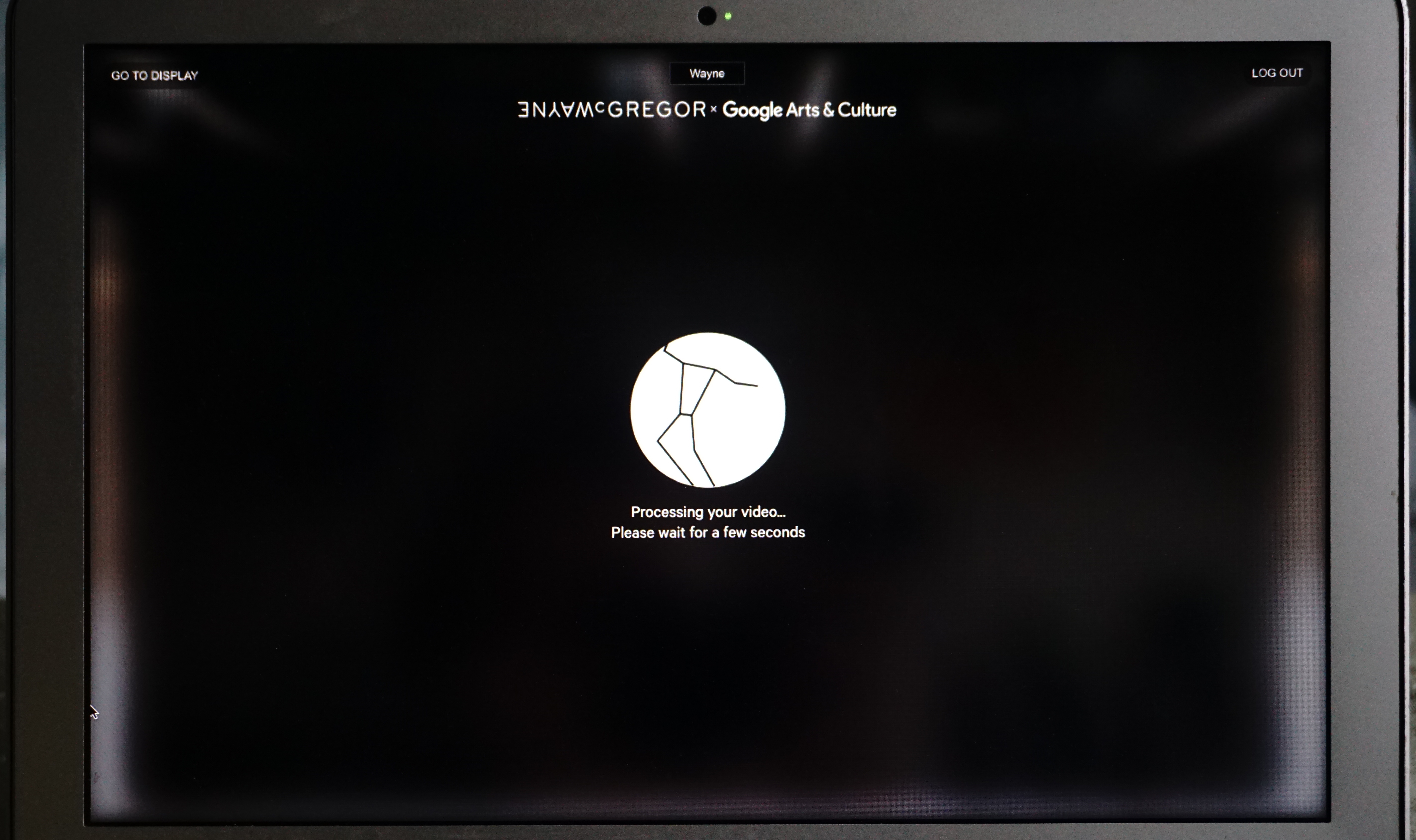 “It’s a hard tool to work with, it’s not easy, so it can be frustrating at the beginning, but, from an external perspective, the movement it creates on a body is really interesting,” Eileih notes.

“Living Archive is a piece that is very different from Wayne’s other works, it developed something totally different from a company, so I think it was definitely worth it.”

For Jacob, working with AI allowed dancers to “get out of their habits.”

“As a dancer you go instantly to one thing, whereas there’s this thing that creates movement for you … I think it could take over some of the improvisation, but obviously a dancer’s idea is also quite interesting as well,” he says.

They both think of A.I. as an endless source of creative materials and a ‘support’ for choreography, however they were hesitant about the “richness” of A.I. generated works.

“There’s also a journey of the whole creative process, when you start with an improvisation or an idea and by the time it’s on stage, it has gone through entire process together and if we take some part of this journey and put it in A.I., it would be different, but for me, it would not be as rich, as deep, because I have not investigated from the second it started—when the idea was born,”  Eileih notes.

“A.I. only generates material, it does not evoke emotions or create a storyline.. it is a picture of what possibilities could be,” Jacob says.

If A.I. gives a human being, and in this case a choreographer, endless possibilities of movement prediction and he/she is responsible for its composition, structure and representation, this can mean that a totally new ‘engagement’ can be born in the future.

Choreographer and dancer Natia Bunturi found the A.I. to be an “easy tool” for choreography. Natia worked with the AI program during creative workshops Studio Wayne McGregor conducted in Georgia as part of the Circe-Experimental Platform for Dance and Theatre.

At the workshops, participants worked with this A.I tool, which predicted future movements—the dancers’ next gesture. The predictions were based on the 25 years’ worth of dance videos, analyzing how the body behaves.

“Whenever I create a piece, whether it is based on an idea, music or movement, I always take one movement as a starting point and then I interpret it, create different options out of it,” Natia says.

“Working with A.I. made “double” interpretations, meaning that first of all, it registered my movement, then, analyzing that, it gave back its own prediction, which then I used to create another interpretation. I think it might it’s an easy tool for a choreographer, of course, he/she needs to choose movement, interpret it etc., but it is a good base to start with.”

“I think it is a great tool to understand the variety of ways to move the body, how many variations can be made out of one movement, how many repetitions, interpretations and changes can be done. There is so much more that we are not doing now, that we have not experienced yet, and suddenly this tool gives you the opportunity to discover the ways to develop, change…” Xosilita, dancer and performer and participant of the workshop, notes.

AI predicted movements are not based on emotional response yet so for choreographers, there is no question that humans still have a vital role in the process.

“I think that A.I. comes in when we talk about concrete, outlined choreography, where every movement is planned. One might be able to use the prediction movement of A.I., but again, as a starting point and then continue improvising from that point,” Natia says.

“Dancers’ movements and improvisations are very individual, organic, very human and very honest. I don’t think that someone’s individualism can be replaced by the improvisation of another human being,” Xosilita says. “For me it’s very personal. And I think that AI cannot replace it, not because it is not capable of, technically, but just because these are two different things. We humans have other experiences, knowledge. When A.I. develops these capacities and creates improvisation, it is still going to be a different thing, ideal as well but by A.I.”

Eventually, AI could be a powerful tool for the dance community as it evolves, Xosilita said.

“We are not going to be in competition with it. Quite the opposition, it will be a tool that will make things easy for us..

“And I also think that A.I. involvement in dance will make more artists interested in working on new creations. Everything that we have now, the knowledge, experience that we gathered throughout the centuries in this field, is getting a bit boring now. We evolve every day, however, there’s a feeling of limitations already, and I think A.I. can break these limitations.”

Published with the support of COBERM, a joint initiative of the European Union (EU) and the United Nations Development Programme (UNDP). The contents of this publication are the sole responsibility of the organization Chai Khana and can under no circumstances be regarded as reflecting the position of either the EU or UNDP.
#Tbilisi #Georgia #digitalisation #Contemporary Art #A.I. #Choreography
DONATE TO CHAI KHANA!
We are a non-profit media organization covering the topics and groups of people that are frequently ignored by mainstream media. Our work would not be possible without support from our community and readers like you. Your donations enable us to support journalists who cover underrepresented stories across the region. We are currently working on the topic “Digital Footprint,” exploring how the computers, tablets and apps that now play such a pivotal role in our lives affect our wellbeing, our relationships, our communities and our societies— and what it means to live in a digital age. Your donation will be used to support our contributors working on this topic.
DONATE NOW

While Facebook is still the most popular social media site in Armenia, with 1.5 million registered users, TikTok is quickly evolving from a kids’ app for funny dance videos to an influential platform.

From sex education to comedy, Armenians embrace the wonders of TikTok

Ana’s life in Gali (district of Abkhazia) has always been a struggle against stereotypes. Photography, however, gives her a way to express herself. A roaming camera is a short film which portrays a 17-year-old girl’s wish to break the “rules” that exist in her community and become a traveler like her camera traveled over borders and cities before she received it--and her images travel over the great expanse of the internet via photos on Instagram.

A girl with a roaming camera

After a 77-year-old grandma discovered the riches of technology, she is enjoying life in two worlds: real and digital. Svetlana Tamazyan was only 50 when her husband died, leaving her to care for their five children. Despite the challenges, she raised the children alone and ՝ a small village, Akori, in Armenia’s northern Lori Province. Today her children live far from her, some in the Armenian capital Yerevan and others in Russia. To stay in touch, they bought her a tablet and taught her how to use Viber. Svetlana quickly discovered the riches of social media. Today she watches films as well as videos about sewing and cooking on her tablet or smartphone. Best of all, the devices allow her to stay in touch with her children, grandchildren and great-grandchildren.

A coffee with a grandma via skype