I first came to Abkhazia in honor of my grandmother, to experience the land she told me about in stories.

As the days and weeks passed, the villages and towns I had known only through her words started to take shape through the people I met.

In particular, I was struck by the number of senior citizens who were still working, living full and productive lives. Listening to these people—so cheerful, passionate about life, in love with their work—I thought about how precious their knowledge and experience is.

Soon I found myself seeking out people over the age of 80, questioning them about their lives. I found that regardless of gender, or professional success, most were happiest when they were free to live their lives as they saw fit, to follow their own path. As 80-year-old Valentina told me, “the most important thing is to be honest with yourself, to stay human.”

Valentina’s shop in Sokhumi is very atmospheric—it feels like I've found myself in a Soviet time store from some 30 years ago. On the  saleslady's table there are beautiful tall  white flowers and a flag on the wall. The shop is usually busy; it took several visits before I had the chance to finally speak with Valentina herself. 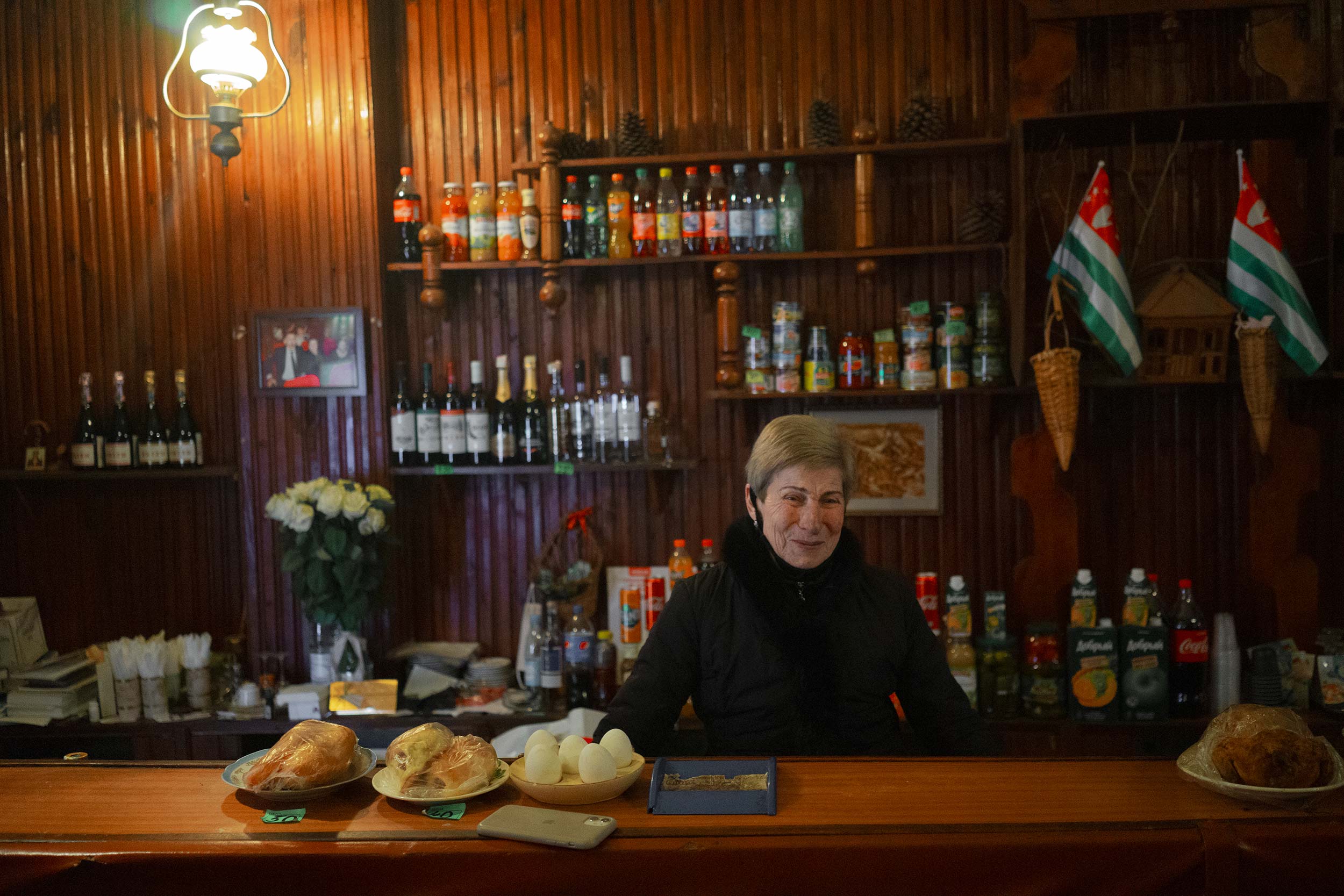 I know almost the whole city, everyone pops in. They might come in the morning, sit at the table, have coffee, relax; those are friends and customers at the same time. If I don't come one day, they start to sound the alarm, asking  'Where have you been'?

I'm here to help people feel good. Sometimes they come in a bad mood, but we find a common language in the end. I have always treated my business and people with respect.

You never know what else is waiting for us ahead, so the most important thing is to be honest with yourself, to stay human.

We met Nikolai when my friends and I came to his place for some homemade wine, which they said is “the best in Abkhazia.” 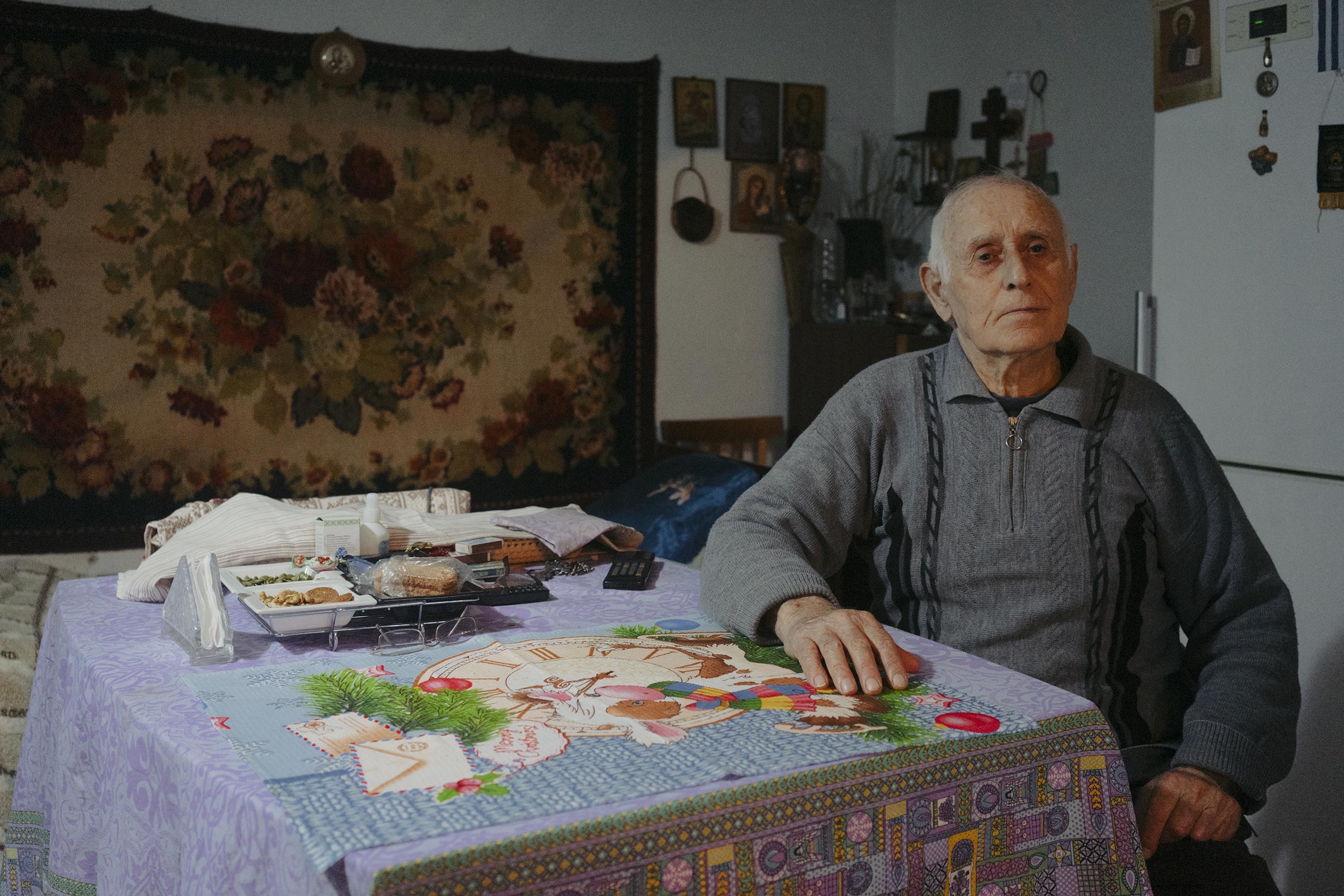 I used to be so handsome, with wavy hair. I used to be a hairdresser. My haircuts were like pieces of art. All the customers loved it, they would wait for me to serve them. I worked for 70 years. And even now some people come to my place to have their hair cut.

I also make wine, you've tried my wine, haven't you?

It's made using a Greek method… I've been into winemaking all my life, since I was 17. I cut people's hair and made wine. The main thing is to work honestly, do your job with honesty, with love.

We were chatting in his workshop, which is small, quiet and modest. From the outside it's a completely unremarkable building—it looks like a kind of a semi-collapsed garage or shed. But once inside, it is as if you have entered a magic world. Soft diffused light, wooden floors and textured walls, and dozens of sculptures everywhere, each looking as if they were alive—and every one of them a small introduction to this person, this delicate artist.

Vitaly Viktorovich is an incredibly kind, sympathetic person, an intellectual—the kind of person that used to be called someone from “the old Soviet school.”

An artist and a teacher, he helped introduce Abkhazian artists to the world in the beginning of the 21st century. 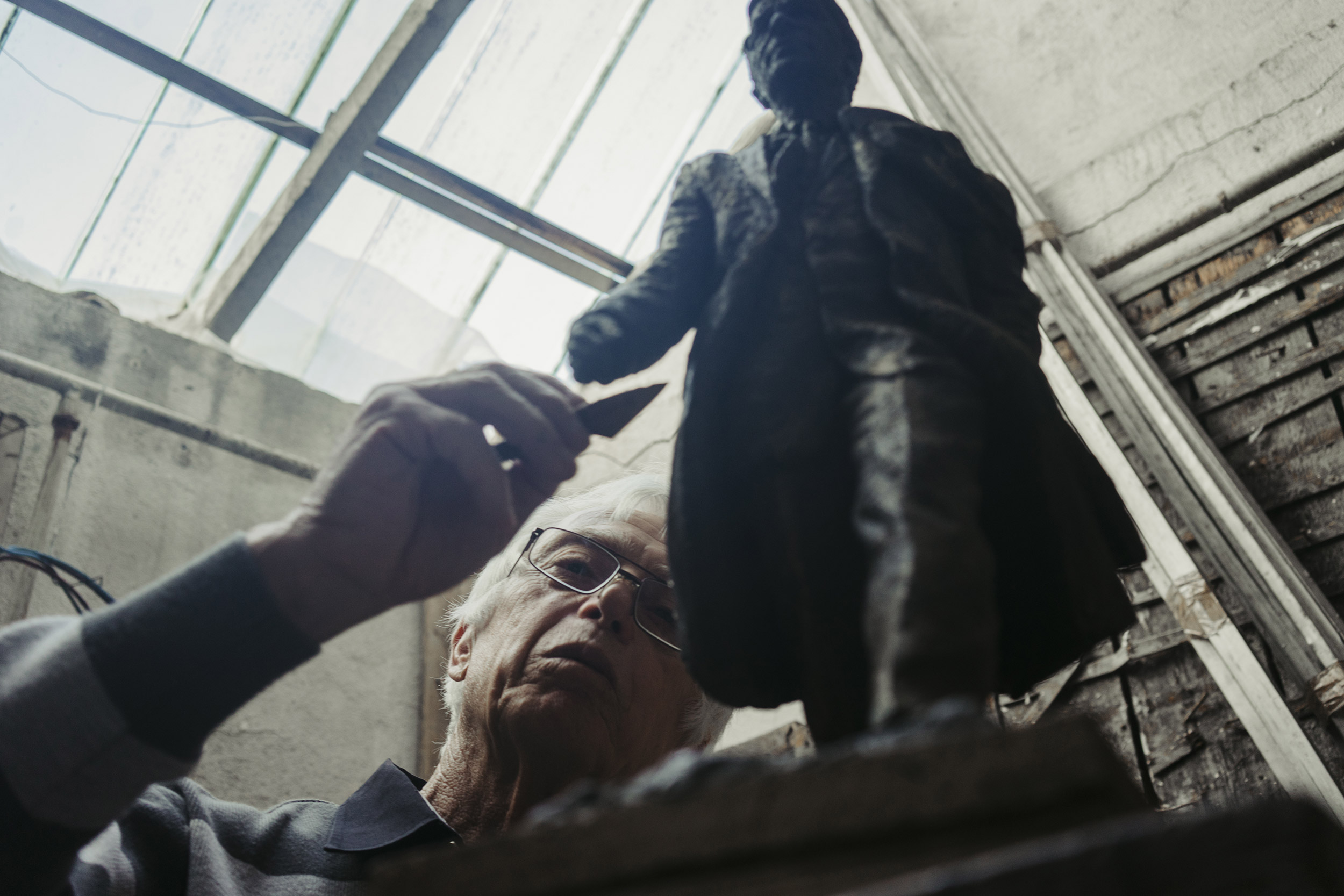 It was 2001. I became the chairman of the Union of Artists of Abkhazia and met the president. We talked and I told him about the deplorable state of the arts. I suggested paying 5,000 rubles a month to my artists, which was good money at the time. People didn't get paid at all after the war. He agreed with my proposal, and that is how we started to motivate artists to begin to work. Soon after they started organizing exhibitions everywhere, first in Sochi, in Russia, in the North Caucasus. Then in St. Petersburg, Moscow, Italy, France, Paris, Turkey and Kabardino-Balkaria. Before that our artists had been on display only during the Soviet Era.

I feel fine here in Sukhumi. There's a lot of free space around, it's quiet here... There is an opportunity to concentrate when it's necessary and in fact, the most important thing for an artist is to come to the studio and do what they love—this is probably the highest spiritual sensation for me, so I feel very good here. I'm working as hard as I can. The most important thing is when a person feels free, and I feel that here now.

I was walking along the embankment and spotted these two, strong, elderly people who immediately grabbed my attention. They turned out to be friends, both artists and centenarians, who planned to continue working for many years to come.

Vladimir: - I used to be a leading graphic designer in Sukhumi (Sokhumi), I've worked as an artist all my life.

I've always been on a move, I'm the former boxing champ in the Krasnodar Region, I walked and ran a lot. The secret is to move a lot—you need to move every day, every evening. Of course, all my friends are already gone…

Albert: - I used to be the deputy director and the main artist of the city department responsible for all the celebrations. I am also a master of sports and I studied at the Academy in Tbilisi, majoring in ceramics.

Once on a holiday, I had to work overnight to draw 18 people! One night only! And I drew them all, six by three metres! I worked a lot, earned money, traveled around Russia.

Vladimir: - And how old are you now?

Vladimir: - No one will catch up with me anymore. In just eight years, I will turn 100. And I will live longer, I'm strong, I move a lot, I walk all the time.

Albert:  - The most important thing is to be an optimist! Never allow pessimistic  stuff get into your soul!

Vladimir: - Don't think about bad things. Forget your worries and think about making yourself better. Life is constant motion, nothing more.

A strong, confident and calm man, Daur Sukhumsky introduces himself as the deputy chairman of the local community of the blind. 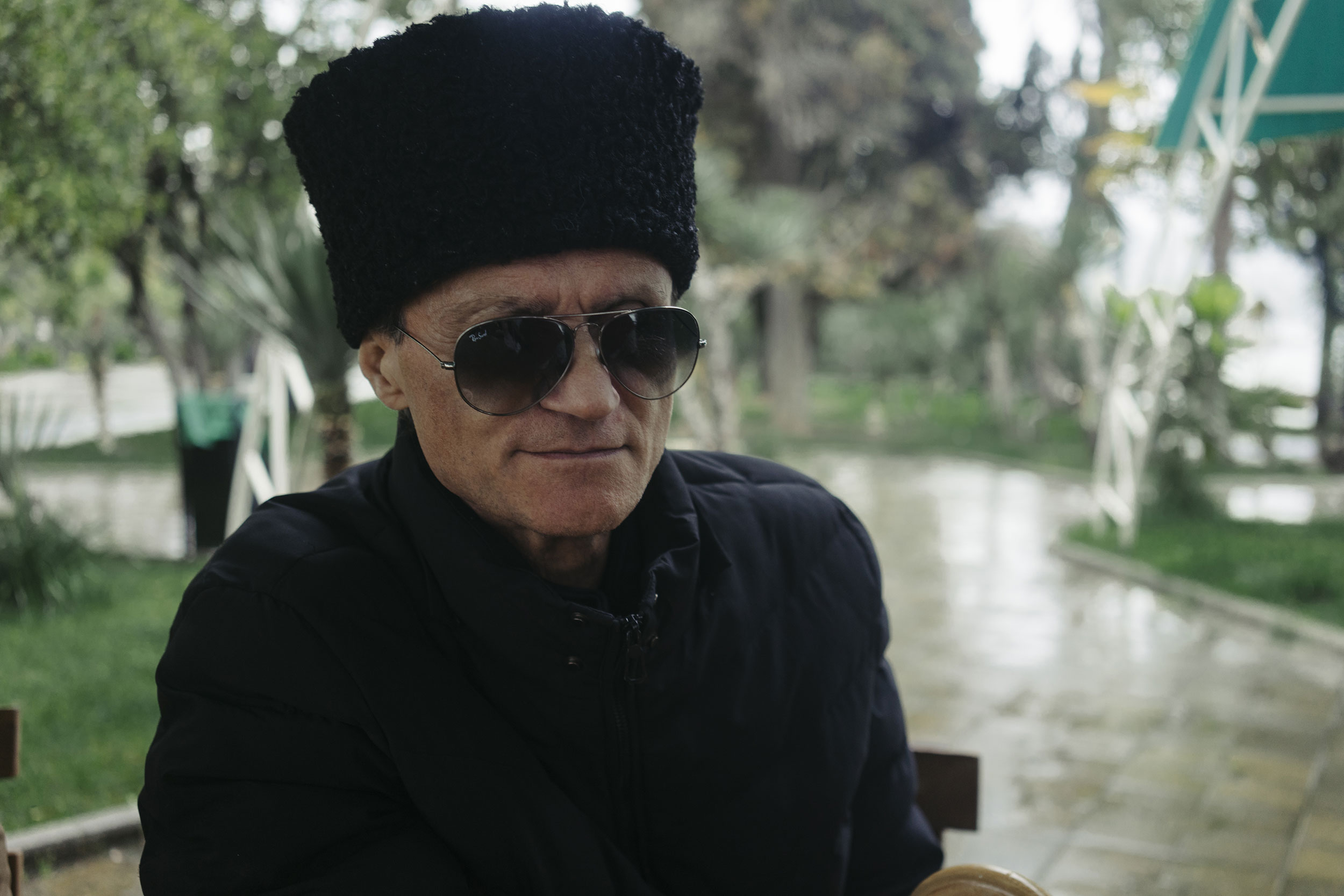 I graduated from pilot school. I was a dispatcher, then I went out both in the air and in the sea but ended up losing my sight.

Now I am the deputy chairman of the Abkhazian community of the blind and also the head of the one and only organization in Abkhazia that restores the priesthood. It deals with religion, culture, rituals, folk medicine. By the way, four religions have been recognized in Abkhazia—Judaism, Islam, Christianity and our traditional faith, anchakhasaran, which means “the name of God” in Abkhaz.

I sense everything from a conversation. You know I've realized that there are no ill people… If you accept it as a disease, you will get sick. When you take it as a test, you either pass it or not and go on. It is the same for blindness. Do you know what the trick is?

For those of you who can see, 70 percent of information comes through vision. When someone loses their sight, they can feel obstacles and hear better. For example, I have only 50 percent of my hearing, but I hear well. I also recommend everyone, even people who can see, to wear a dark bandage every day, at least for five minutes and sit down or walk with it to develop the abilities a blind people have. It's so interesting.

The most important thing in life is self-discovery. And without knowing yourself, how can you learn about the world? Everyone is trying to change the world, but it doesn't work that way. Only by changing yourself can you make the world around you a better place.

DISCLAIMER:  This photo essay does not use terms such as ‘de facto’, ‘unrecognised’, or ‘partially recognised’ in reference to Abkhazia. This does not imply Chai Khana’s position on its status.

#Abkhazia #elderly #Sokhumi
DONATE TO CHAI KHANA!
We are a non-profit media organization covering the topics and groups of people that are frequently ignored by mainstream media. Our work would not be possible without support from our community and readers like you. Your donations enable us to support journalists who cover underrepresented stories across the region. donation.stories.donate-text
DONATE NOW

Hotel Iveria located in the heart of Tbilisi used to be Georgia’s most vivid reminder of war and forced migration.

After almost five decades working as an animator, prominent Azerbaijani author Elchin Akhundov was forced to retire. The man behind many popular Soviet cartoons, Elchin tries to reconcile with his new life. Deprived of the opportunity to create and teach the next generation of animators, he tries to stay creative with limited resources. Surrounded by the paper dolls he creates now, Akhundov reflects on his life, age, creativity and need to share his knowledge with a new generation.

No time to retire

The pandemic opened a new path to peace-building.

A portrait of Abkhazia as seen through the eyes of a young artist in a search of her grandmother’s hometown.

You dreamed of a sparrow