At Shaki Bazaar, around 350 km from the Azerbaijani capital Baku, work starts at daybreak. Traders hustle for customers, fighting the clamor of livestock, crowds, and trolleys to attract buyers to their wares. The work is difficult, dirty, and unappealing to most young people, who prefer the sterile cleanliness of modern shopping malls to the sights and smells of traditional bazaars.

That was not always the case. For generations, bazaars have been major public spaces in Azerbaijan—a hub of news, socializing, and trade. As Soviet society collapsed in the early 1990s, Taza Bazaar—like bazaars across the country—became a safety net for workers from across the economy who turned to trade to earn a living. Many have stayed on, working for years past pension age.

In 2015, I photographed the traders at the bazaar, known by the locals as Taza (New) Bazaar. The images languished in my archive, largely forgotten, for years. When I found them, I was struck by how most were elderly and I wondered what had happened to them, how they had faired over the past six years—especially during the quarantine--and how many were still working at the bazaar.

And so it was that one sunny Sunday morning earlier this year I found myself once again at the entrance to Taza Bazaar in Shaki. It was a pleasure to hear the background sound of a crowded space in the early morning. In the beginning, I observed the traders’ preparations and morning rituals before lucky Sunday sales.

The first nene (grandmother) who shared her story was Tamara, who also walked around the area with her handmade bags. After I met her, I started to notice that most of the traders had a pair of these bags.

I also met Fatima, who has been working at the bazaar for 21 years. “As you had seen mostly older people work here,” she said. “The younger generation do not sell goods at the bazaar; they cannot handle it. To them, it is complicated and dirty. They even sometimes plug their nose to avoid the smell. You have to be very organized to sell your wares in the bazaar. In the supermarket, everything is simple. Young women do a single job and at the end of a month get a salary for it. Most of these women came here as young women as well, but then they learned how to do that job.”

While I was interested in everyone’s story, I really wanted to find some of the people I had photographed in 2015. The first one was Rasim. At first, he started to try and sell me his goods, referring to them as “stuff for every type of bird.” But once he saw the photos of himself from 2015, he got really excited. Soon everyone in his part of the bazaar knew about me, the photos, and my project.

After wandering around for a while, I finally found the point in the bazaar with a view of the mountains, which I remembered from my first trip. That is where I met Rafiga, who had a stall there. She noticed me staring at the mountains and decided to teach me about local geography: the mountains were known as Kish Dagi, the meadows were called Khan Yaylagi and her name meant “friend.” During this conversation, my new friend looked through the photos I had printed and recognized most of the people in them.

One of them was Gelem. She had not been seen at the bazaar for years. Another was Melahet, also from Kish, who had stopped trading after she got sick. Finally, there was Valida, who was still trading from a nearby stand. When we finished talking, Rafiga showed me a Polaroid snapshot of herself, which had been taken by a Japanese couple who were visiting the bazaar. With Rafiga’s words guiding me, I found Valida, who shyly spoke about her old photos and noted that one woman in the remaining photos was called Zergelem and another was Melahet, who had left the bazaar to work at the local hospital. She led me to Nabat, who had a stall not far from her section.

On the way to the exit, I met Orujov who I had not spoken to before but everyone recognized from my 2015 images. They had all tried to explain how I could find him but as it turned out, he had actually been one of the first people I saw when I entered the bazaar. I had simply not recognized him when I started out. Not 150 meters from the exit, I again ran into Rasim, who was sitting near his car, enjoying a cigarette in the warm sunlight.

Saying goodbye, he asked if I needed any help in Shaki, so I asked if he could tell me how to reach the bus station. Quite fittingly, after a day of following directions, I found myself walking from Taza Bazaar to Shaki Avtovagzali, following the route Rasim had carefully dictated, almost as if his words were guiding me home.

“I am from Kish village and as a child, I climbed that mountain many times. I completed the eighth grade, then I got married. I raised three daughters and two sons and I have 11 grandchildren. But despite this, I am literate and my daughters are all educated. One lives in Baku, the other is abroad. After my husband died, I took up this business, but I am not a saleswoman and I do not like this occupation…Foreigners often come here, one even took pictures of me. A woman from Japan. She gave one of the photos to me, and said that she would enlarge the other and hang it on the wall in Japan,” says Rafiga. 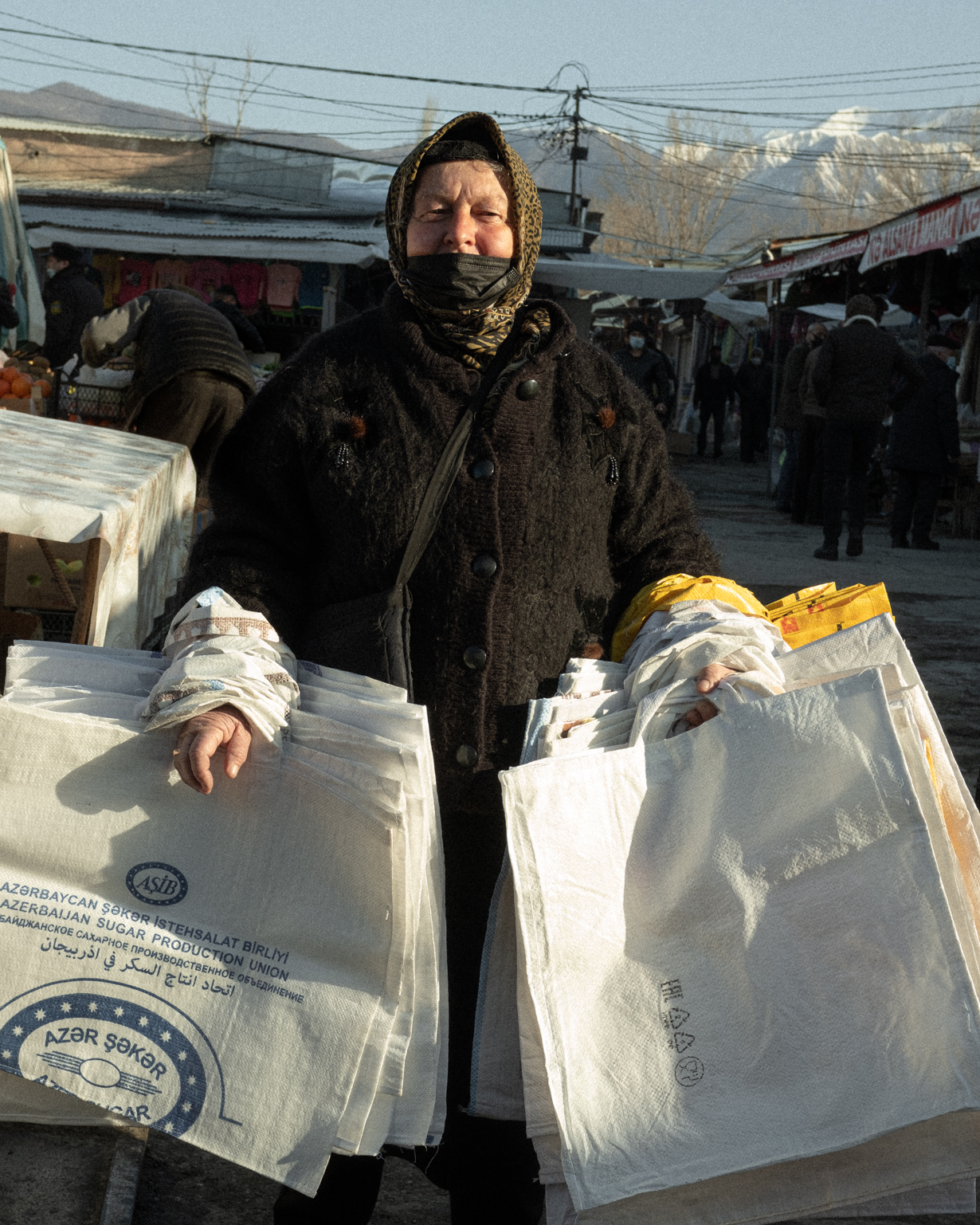 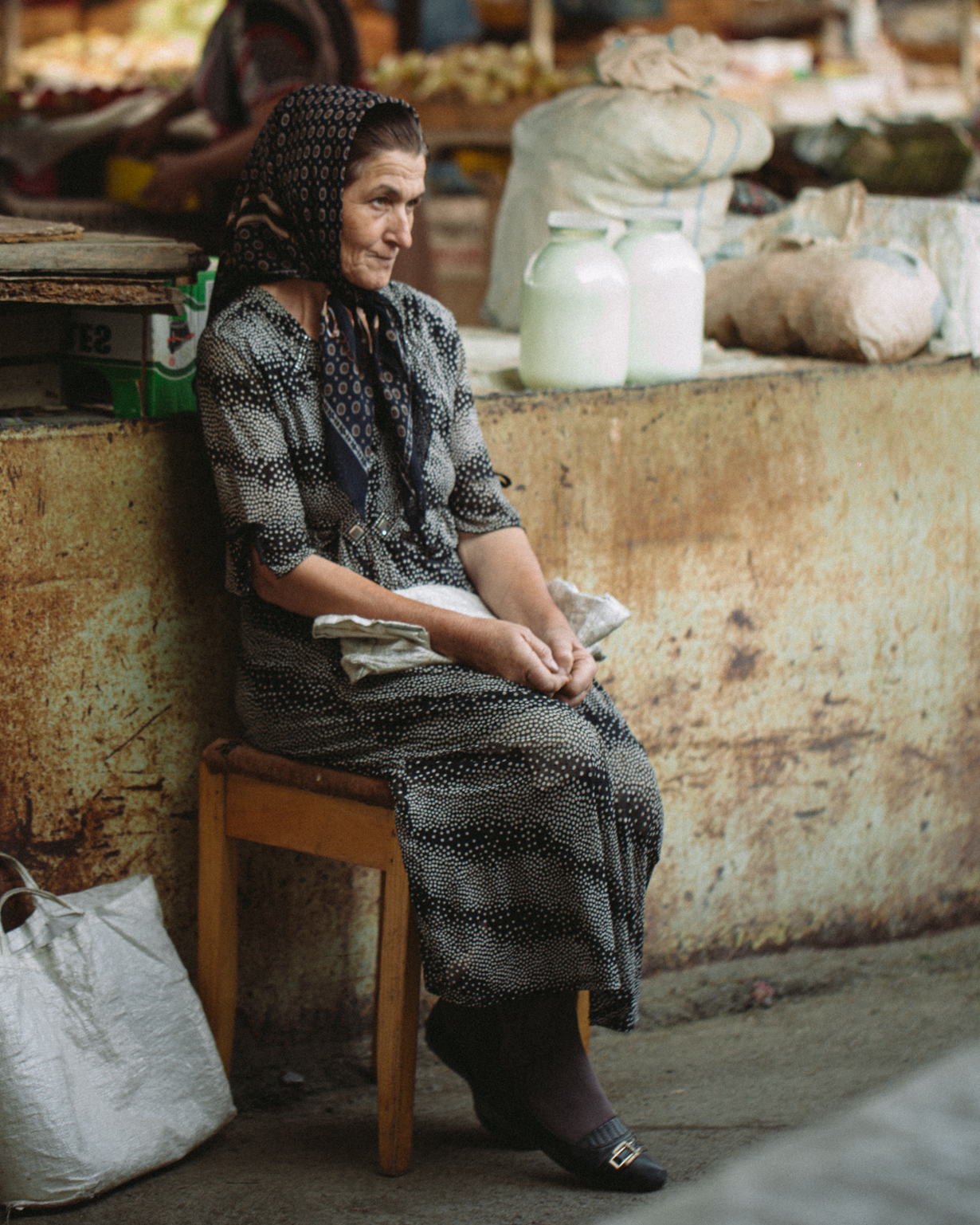 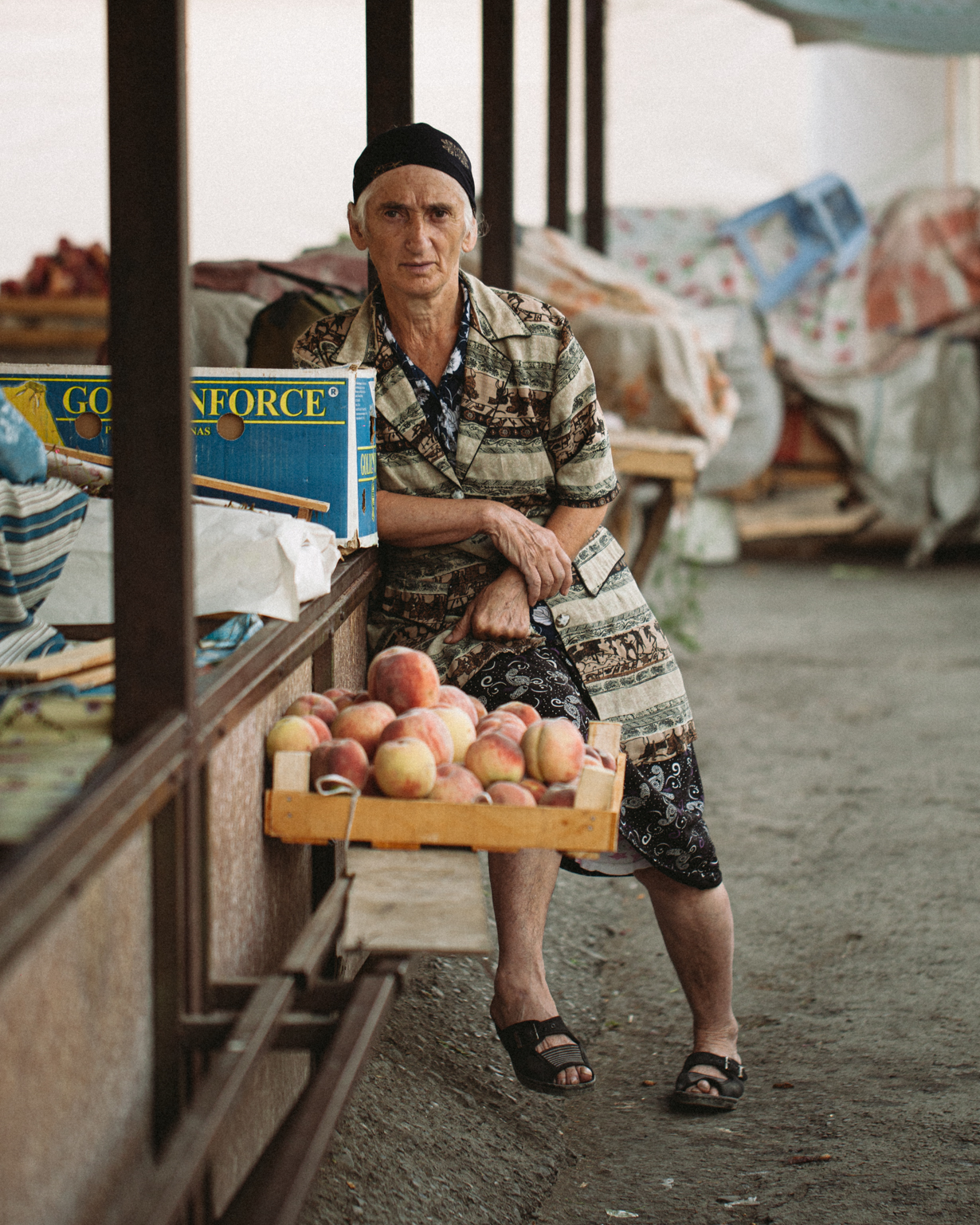 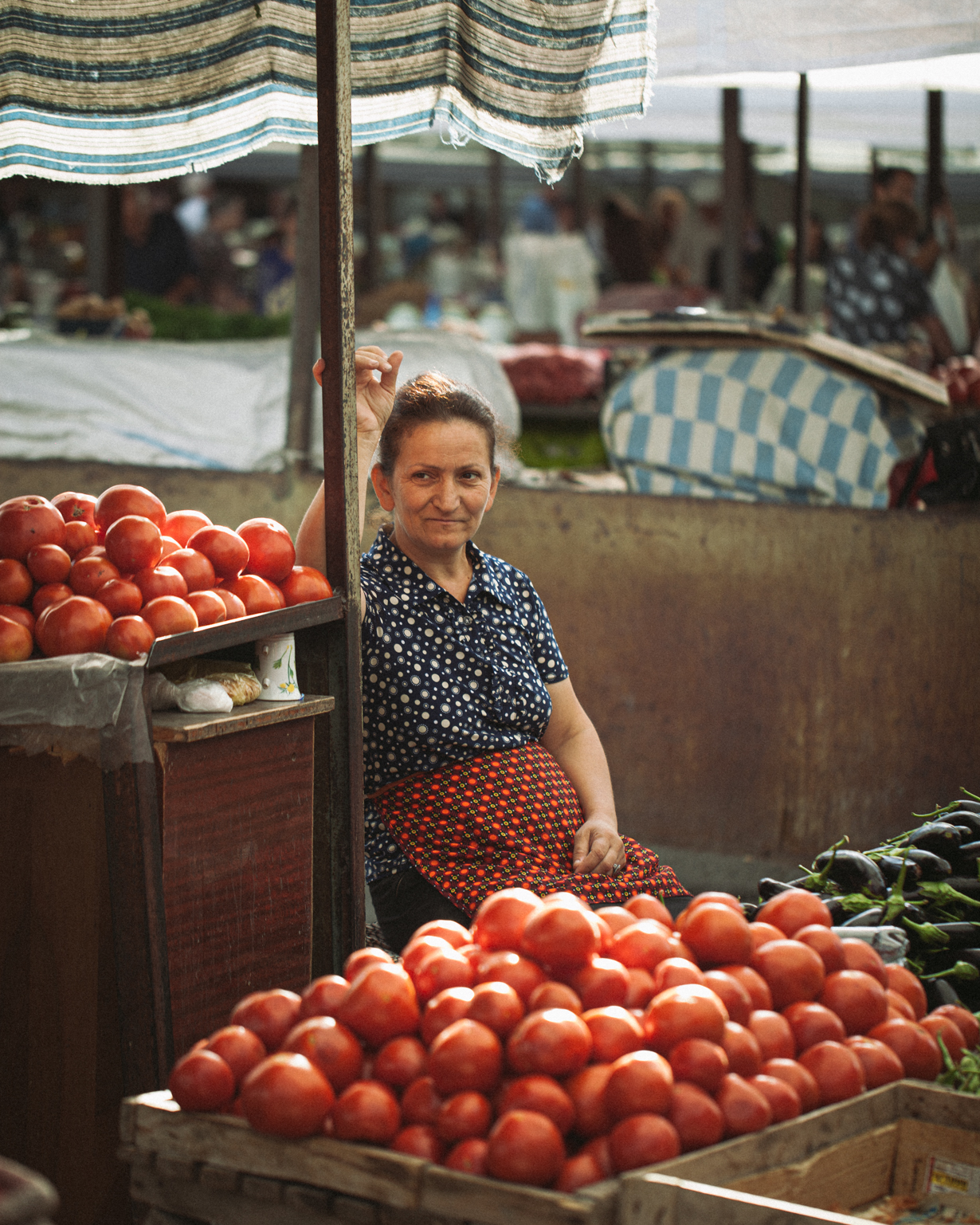 Tamara, 70, sells handmade bags at the bazaar. Shaki, 2021 “I've been working since I was 24. My first job was in tobacco production, the second was at a textile factory. In 1995, I quit my government job and began selling various goods at the bazaar. Now I buy sacks, divide them in half, sew them into smaller ones and make handles for them. Sometimes, when there is no electricity, I work at night under a lamp to see the needle and thread to continue my work.”
Gelem worked in the bazaar in 2015 but by 2021, when I returned, she had been gone for many years. Shaki, 2015
Melahet is from Kish village. She worked at the bazaar when I was there in 2015 but got sick and stopped trading in 2018. Shaki, 2015
Melahet worked at the bazaar in 2015 but left to work at a local hospital. Shaki, 2015

“Before I worked at a garment factory. At the conveyor, 32 women sewed trousers and robes. Then my children grew up, they were married and when I turned 50, I came here. I make all these jams, pickles, juices, and sauces by myself, I buy only dairy products from locals. It is difficult to make a living like this, especially in the last two years, despite the fact that I receive a pension, my husband is a chief engineer and my son works in a restaurant. We have two daughters and a son, eight grandchildren, and four great-grandchildren,” says Fatima.

“My age is like the Sheki zip code [55]. I've always been in trade. In the 1980s, I had a large wholesale store. Things changed following the Soviet Union, sales were bad and I had to close the store. I've been running this business for 20 years. I have every type of goods related to birds.  I buy chickens, roosters, dumb ducks, and turkeys and sell them at a profit of 3-5 manats. And I recently started selling rabbits too,” says Rasim.

A trader who was his polar opposite sat right in front of him. He was silently smoking local tobacco from his pipe, not telling any jokes or speaking to others.

“I've been repairing houses and apartments for 46 years, since 1975. In the winter, when there are no repairs, I sell my chickens. I don’t really love this job, it is tiresome. Different people come, some are irritated, some are serious, and I need to find a common language with everyone so sales go well,” says Vagif.

“I was born in 1955, on April 20 like Lenin. For 25 years, I worked at a silk mill. The Soviet Union collapsed and the mill closed. I stayed at home for a while, then I came to the bazaar. I've been here since 1996. I sell the pickles that my daughter-in-law makes and sends me, and I buy the rest. This is how we earn a living. There have been some repairs at the bazaar since 2015 but the situation has worsened, sales are down. Even the bazaar was completely closed during the quarantine. After some time, they took the elderly to give an injection. Then we came back to work,” says Valida.

“After finishing the 10th grade, I got a job at a tobacco plantation. I worked there until it closed. I have been working at the bazaar since 2001.

I am from Shaki District, the village of Baltaly, but I have a dream - to stay alive until they make the road to Shusha. My husband and I have a small car. We agreed that as soon as the roads were opened, we would refuel the vehicle and go there,” says Nabat

“During the Soviet Union, I drove a truck for years. When the regime fell apart, I handed over the truck. And from the 2000s to the present day I have been pulling a wheelbarrow in the bazaar for 20 years,” says Rasim.

#bazaars #Azerbaijan
DONATE TO CHAI KHANA!
We are a non-profit media organization covering the topics and groups of people that are frequently ignored by mainstream media. Our work would not be possible without support from our community and readers like you. Your donations enable us to support journalists who cover underrepresented stories across the region.
DONATE NOW