From normal to normal

Ever since the World Health Organization declared a global pandemic on March 11, journalists and experts have been trying to comfort the world with the idea of “transition”.

Governments have ordered quarantines from one end of the Earth to the other, and throughout it all, the media has constantly reported on this “transition period” and “before and after the pandemic”.

In every article, experts try to comfort us with predictions about when “life will return to normal”. But few speak about what normal means, or who decides what normal is.

Azerbaijan has been a society on a journey--a transition--to “normal” for over two decades. Look up the word in an Azerbaijani dictionary, you will find two definitions: “as it should be; natural” and “mentally healthy”.

Both definitions highlight the uncertainty of “normal”, how difficult an idea it was for dictionary writers to capture.

Philosophers have also wrestled with the idea of normal. French philosopher Michel Foucault theorized that in the modern world, authoritarian bodies, like governments and the military, have normalized certain behaviors as a governing strategy.

In Azerbaijan, the idea of transition and normalcy has changed frequently. “Transition to normal” has become a norm since the collapse of the USSR. While society never openly discussed the definition of normal, each “transition period” was loaded with the hope and feeling that we would soon reach the “normal life” we wanted.

For some that meant a high salary, for others it meant a prosperous life. Some passed through these transition periods with the feeling that they would leave a strong legacy for their children, and some hoped it would result in a “democratic society”.

However, since society as a whole has not discussed what normal is, and there is no active citizen participation in defining normal, “transition” itself has become the norm of Azerbaijani life.

For some Azerbaijanis, however, the constant transition has moved further and further away from the normal they expected. After months of pandemic “transition”, what will their normal look like—and who will decide who gets to enjoy that normal?

Elchin Abbasov lost his sight when he was seven and, since the age of 13, he has been making handmade artificial flowers and selling them in parks. But the pandemic put an end to his business.

“The flowers I wove were the light of my dark world, and now I'm completely in the dark,” he says.

According to Elchin, a normal life would mean he has a house, and would no longer need to pay rent out of the money he earns weaving flowers. He called his life before the pandemic unusual, not normal.

“For some, a normal life is to get married, have children and so on. But for me, it is to know that someone will buy the flowers I weave in the morning, overcoming a thousand difficulties and sleepless nights,” he says.

“Normal is not to have a lot of money, to harass someone; rather it is to be able to live on one's own without needing anyone.” 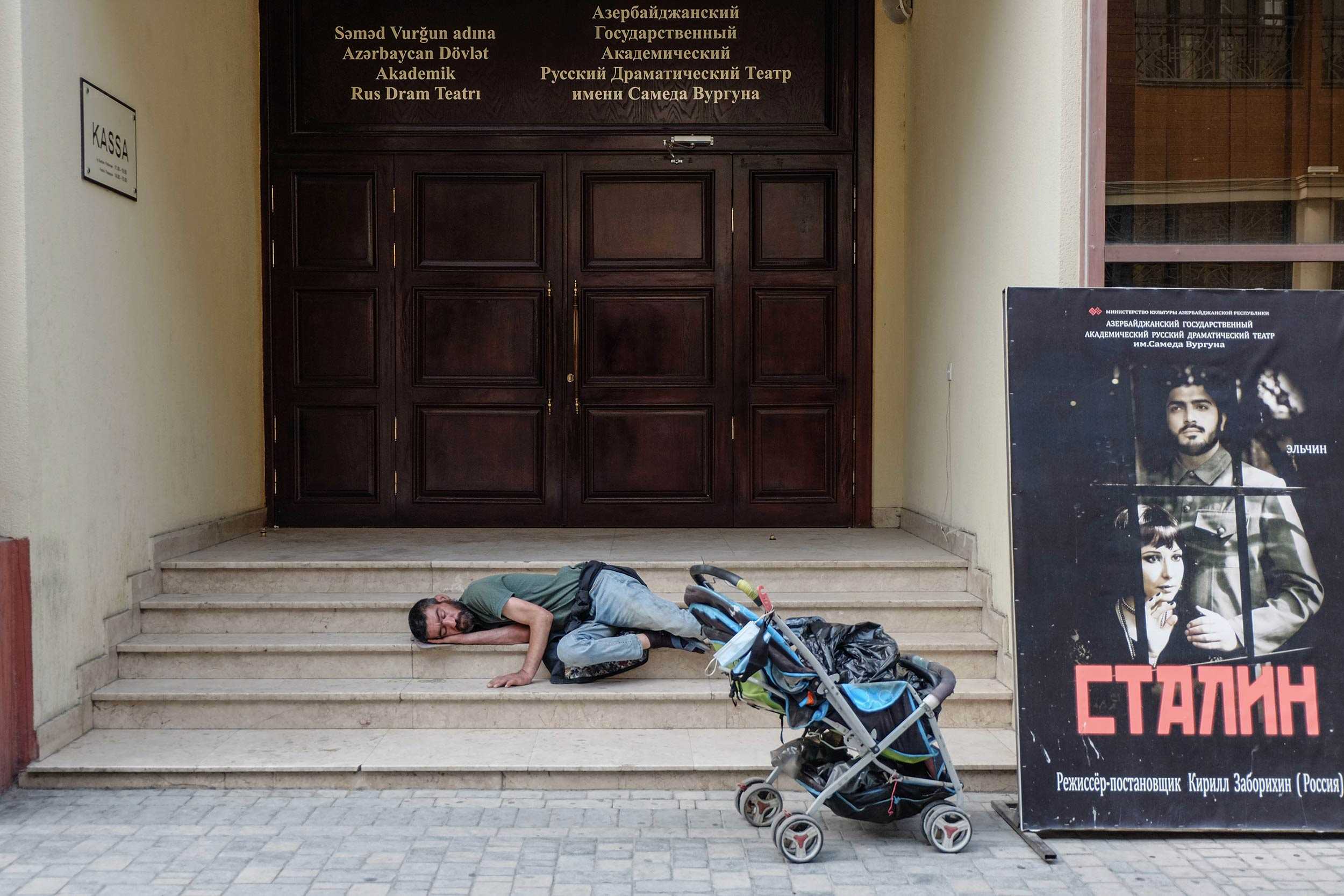 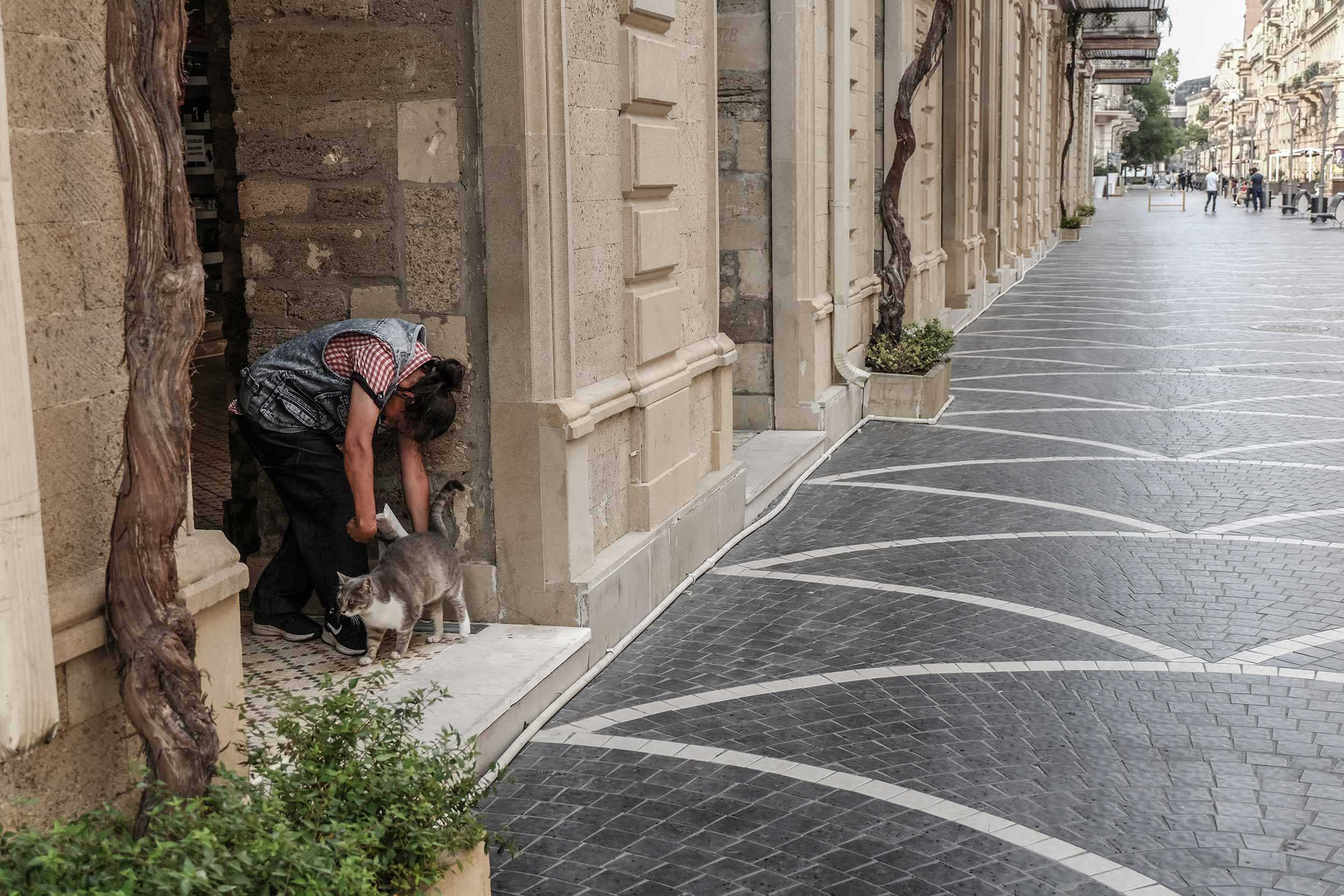 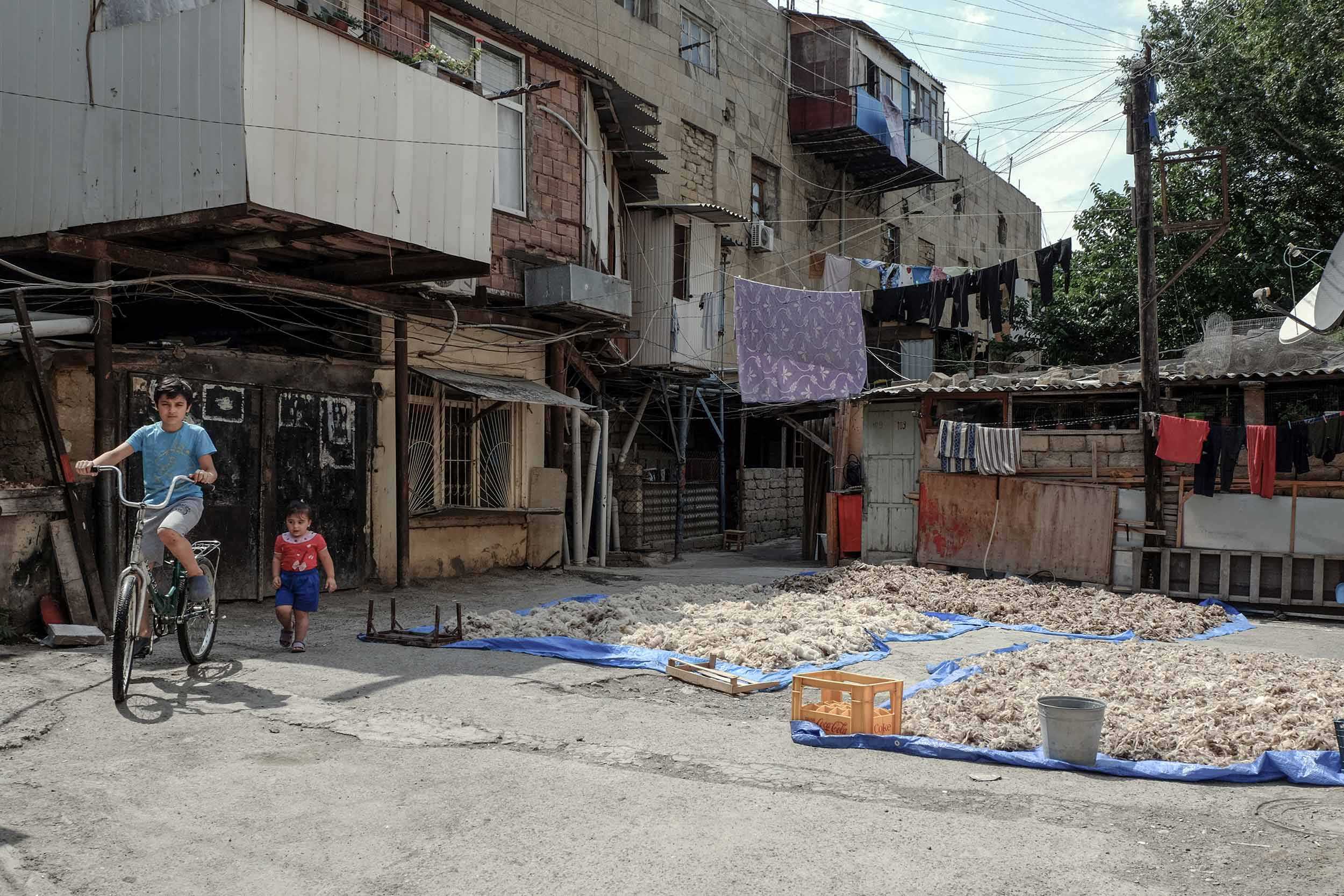 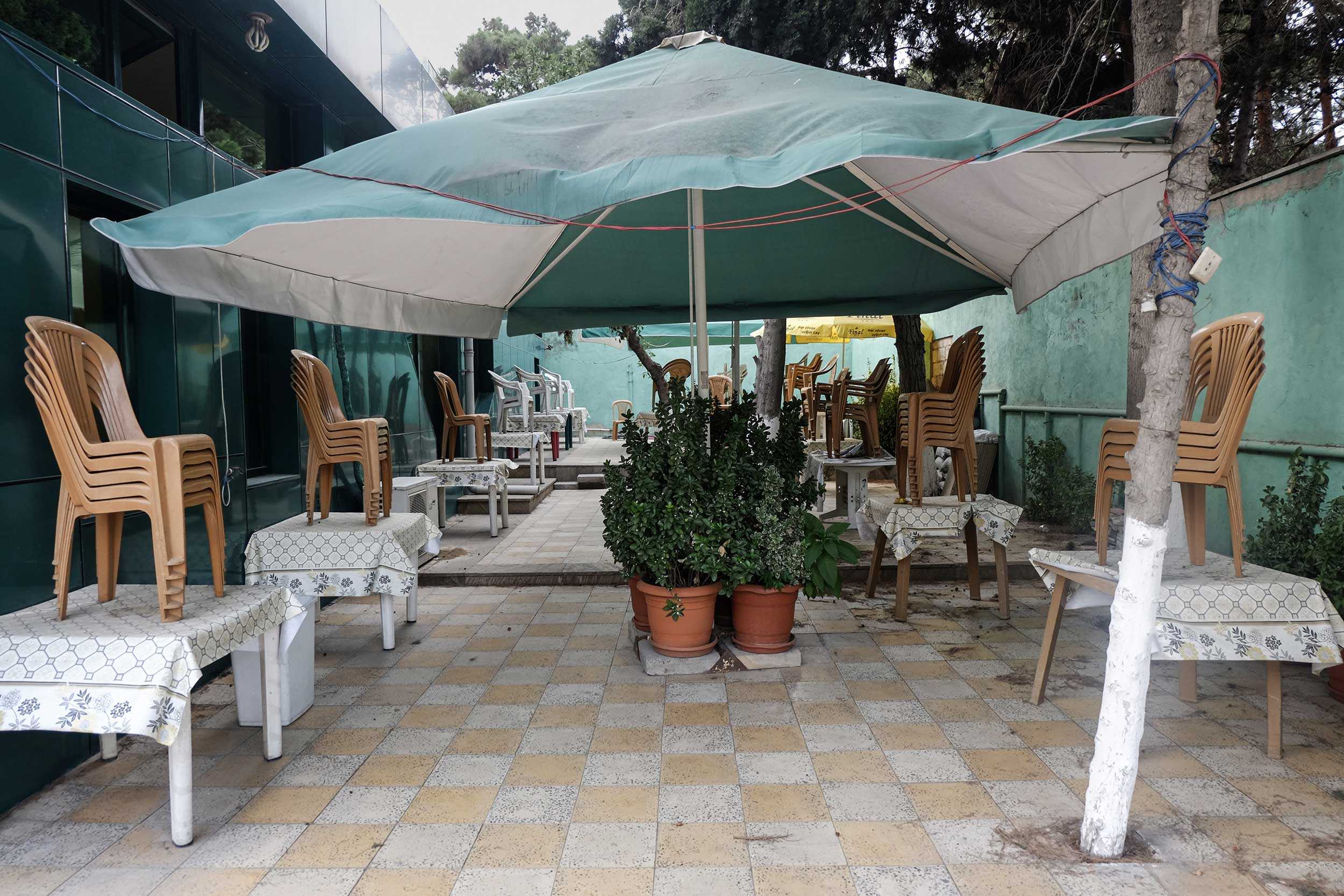 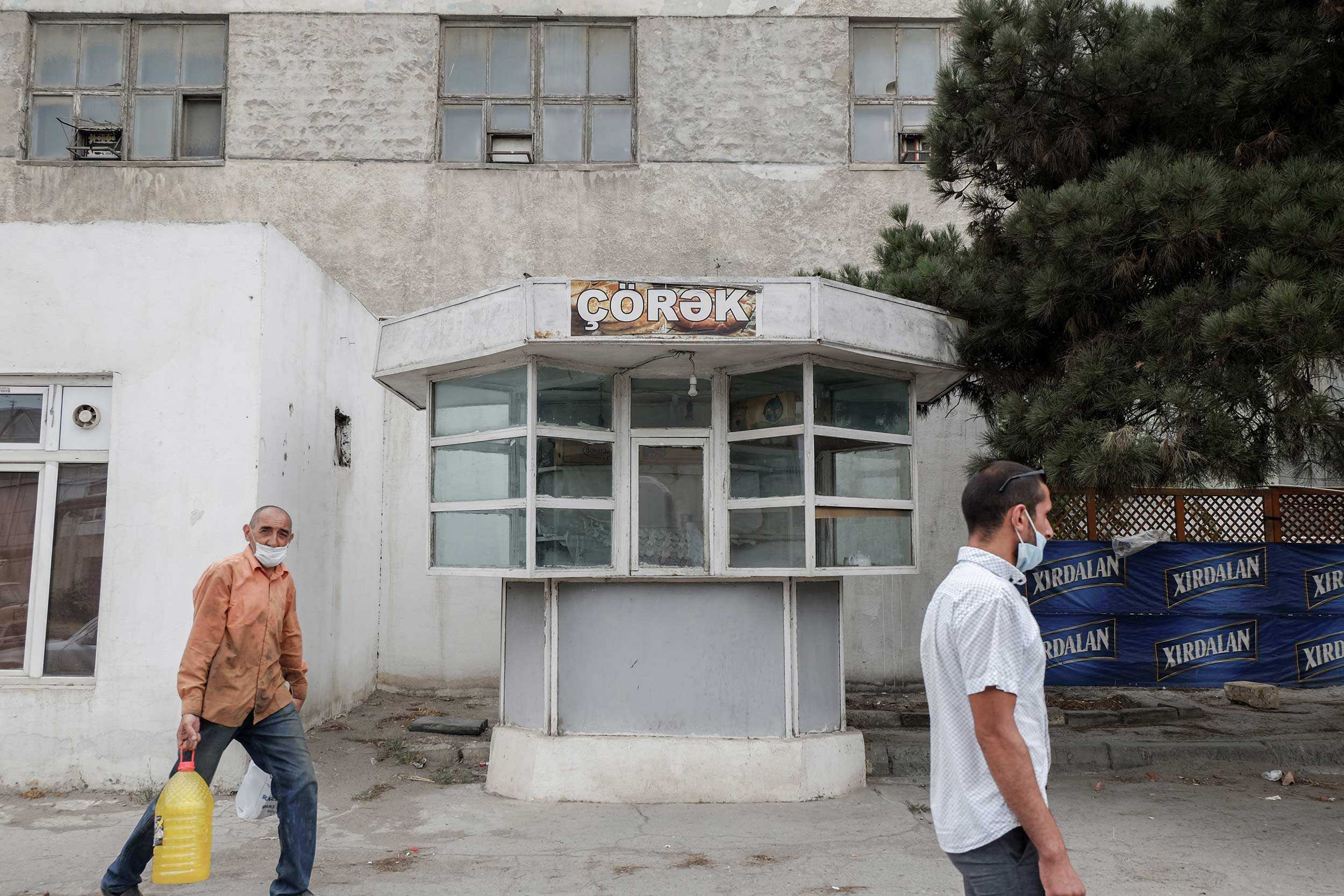 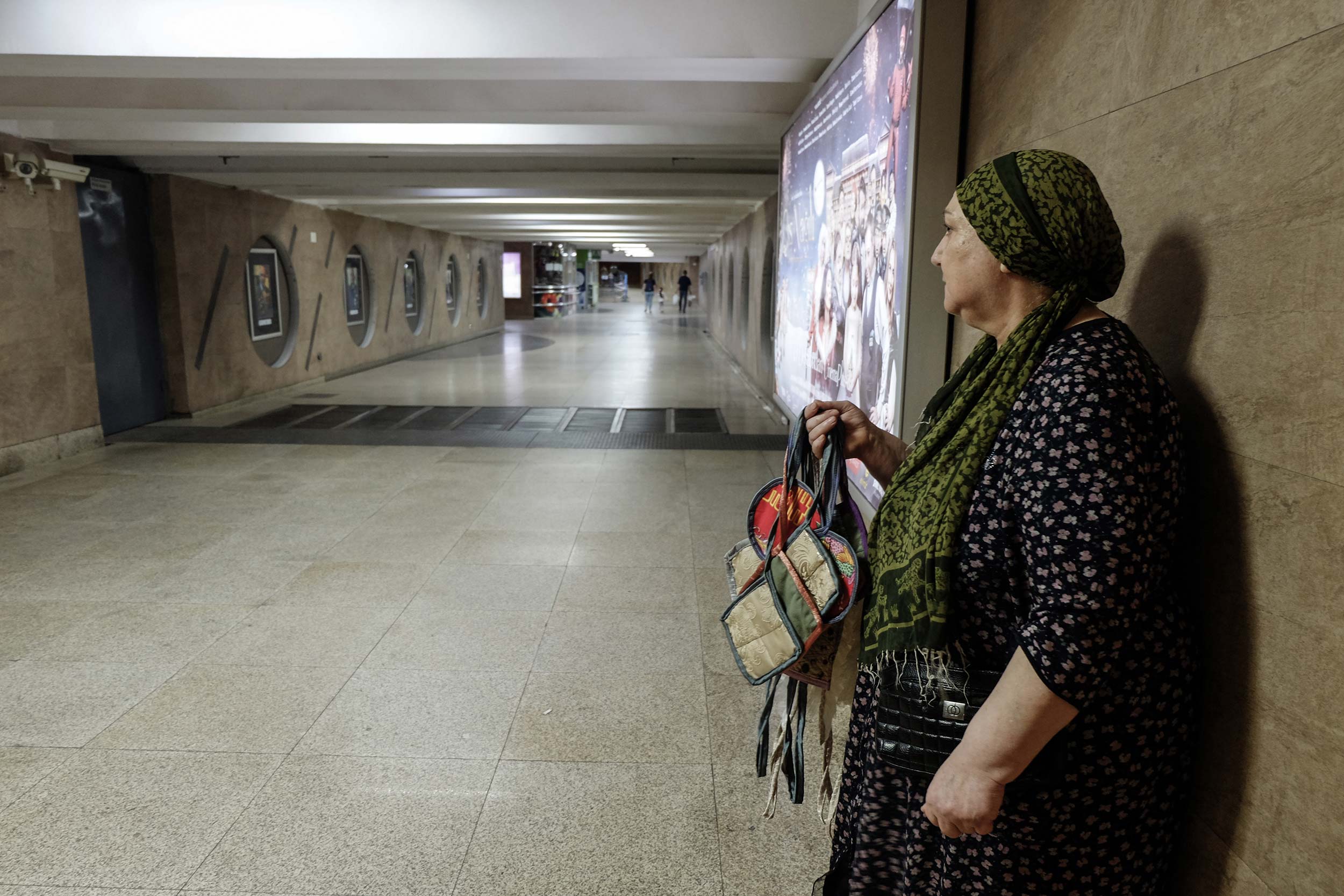 A homeless man sleeps in front of the Russian Drama Theatre in Torgovaya, a central district, during the strict quarantine period in Baku.
Locals call this woman “not normal.” She likes to feed hungry cats in the center of the city during the quarantine.
Life is difficult in this IDP settlement; most men have lost their jobs while the women make quilts.
An open-air cafe near Baku’s 20 Yanvar district, a normally crowded place near the International Bus Terminal.
A kiosk that used to sell bread near Ulduz metro has closed due to a fall in sales during quarantine.
Elmira Mirzayeva, 65, tries to sell her crafts near a metro station.

Before the pandemic, 65-year-old Elmira Mirzayeva also tried to earn a living by selling her handicrafts in parks, near subway stations and in the Old City. Now the empty streets and closed subways have deprived her of this only source of income.

“It's a quarantine regime now, I see people suffering, but it's actually a life I've been used to for 20 years. I have been living in quarantine for 20 years,” she notes.

Elmira remembers her past and another transition period that began with the collapse of the Soviet Union.

“We had a normal life, but after my husband--who was involved in trading--went bankrupt, we had to sell our house to pay off our debts. After that, I was forced to do this work in order to pay the rent,” she says.

“This is not a transition, this is a warning period. It is a warning sent by God to people who have lost touch with each other and have forgotten to hold hands,” she said.

“Now we live in an abyss between the cemetery and survival, there is nothing in between. For example, if I get sick, I can't do anything if something happens to me.”

During the transition period that began after the collapse of the Soviet Union, he had no expectations. Akram adds that those who had hope were disappointed when neither the privatization vouchers nor the promises worked. The transition period was marked with feelings of despair.

“When the Soviet Union collapsed, I knew that life for the poor was over once and for all. I did not join those rallies, nor did I want the collapse of the Soviet Union.”

Akram, whose family lives in Sheki, in northwestern Azerbaijan, has been living alone in Baku for 10 years to earn a living. He sends some of what he earns to his family in the region.

“I would describe a normal life when you have a normal job, when I live with my family and hope for the future. I do not have any of those things right now. I can't even cook properly, I just manage to get by somehow.”

The pandemic has made his job even more difficult, and he has not been able to see his family for almost six months due to strict quarantine rules. “They're there, I'm here, we can only talk on the phone.” 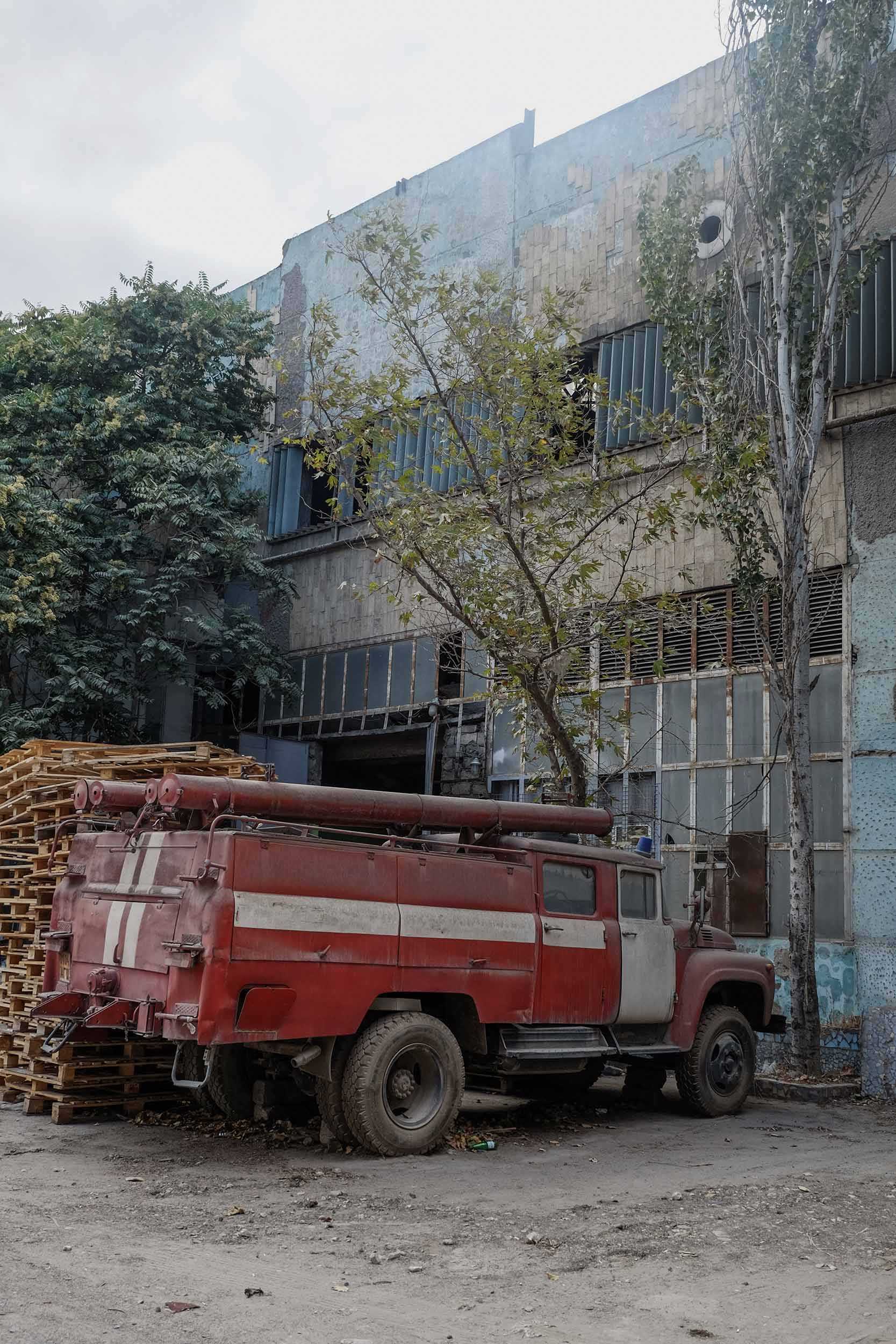 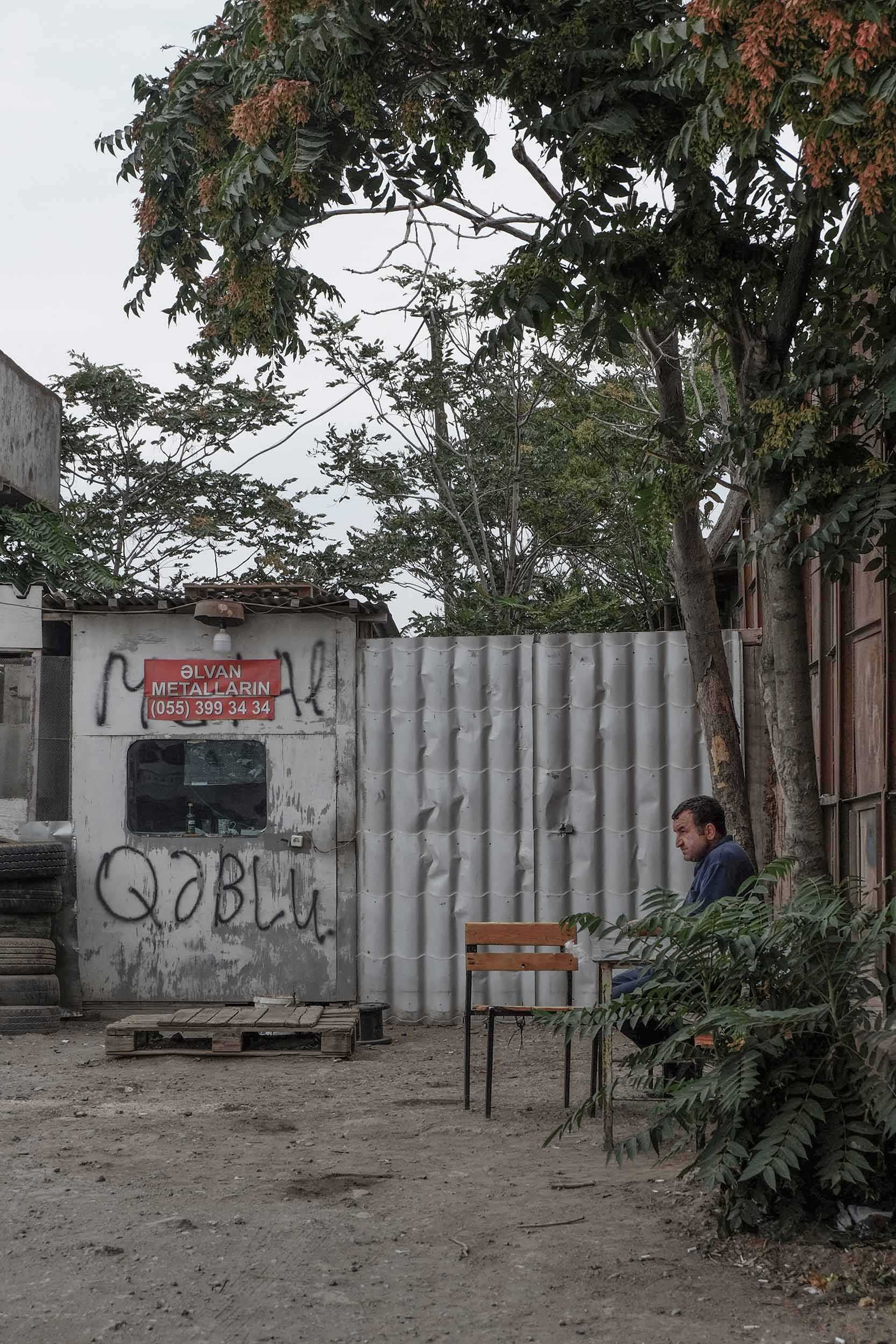 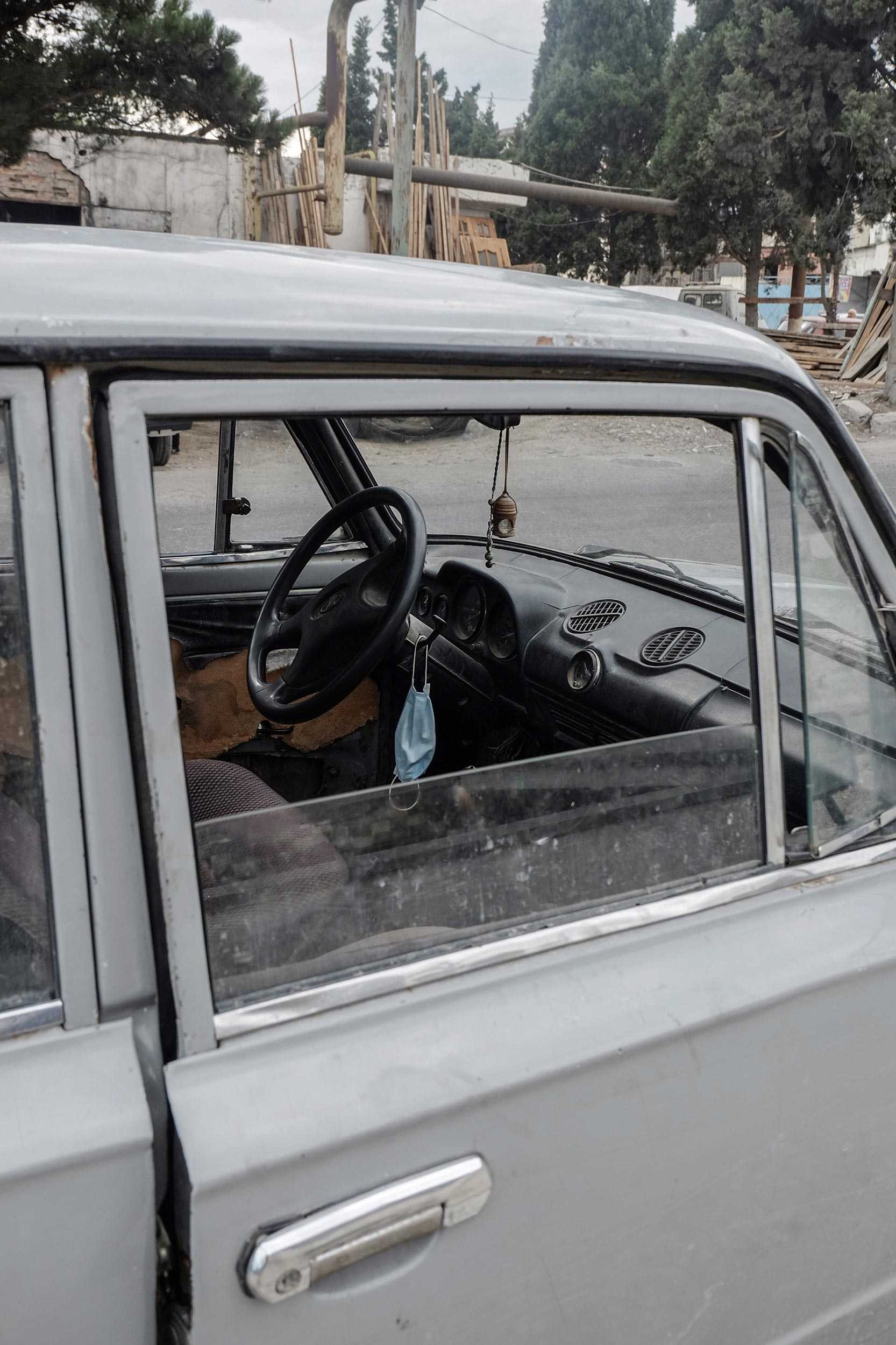 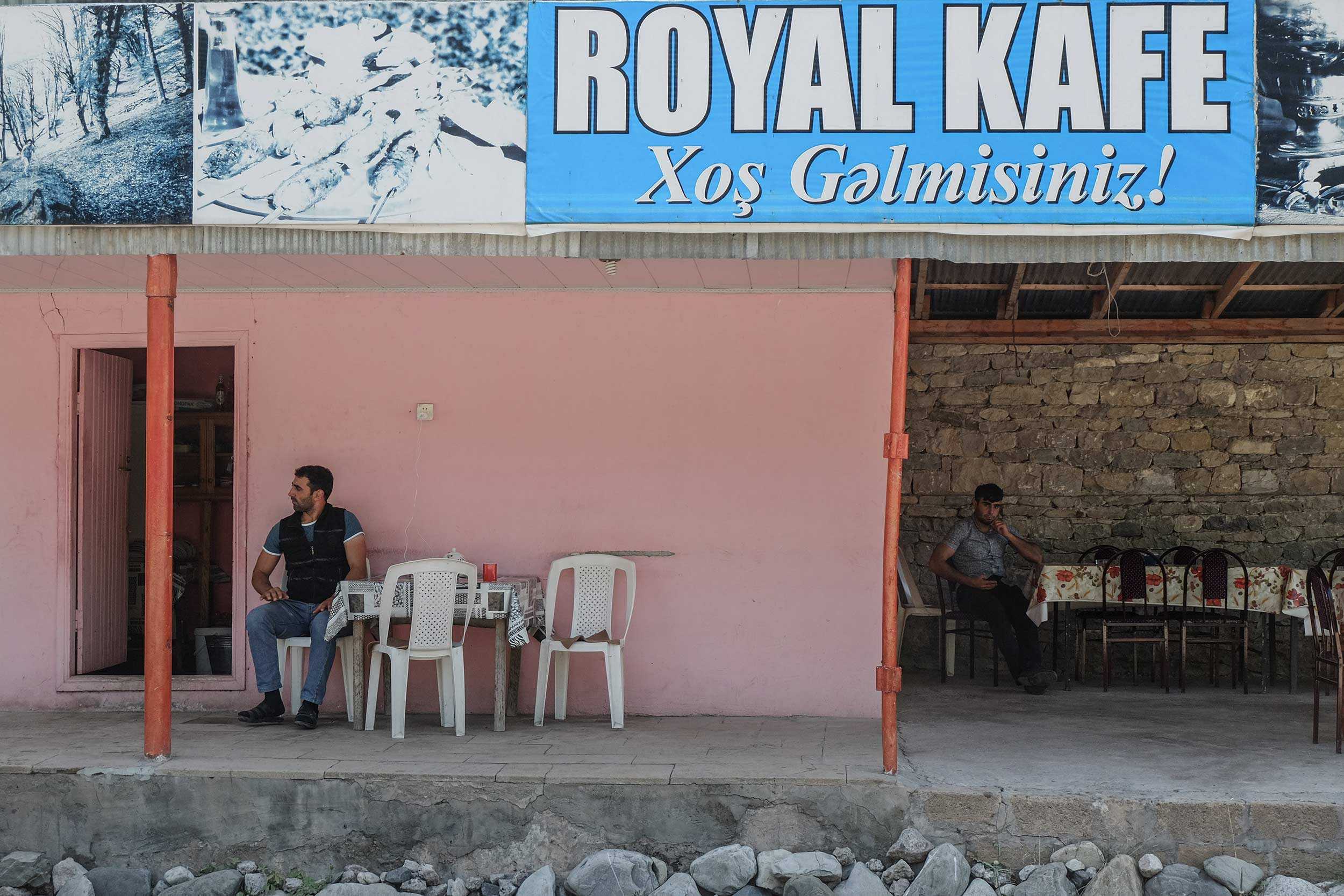 Following the Soviet era, industrial areas near Ulduz metro station were abandoned. A few serve a new purpose as storehouses.
One of a few metal recycling sites that remain near the Ulduz metro station.
Masks have become an accessory now that they are mandatory in closed public places.
A cafe in the city of Ismayilli, which is usually popular with tourists. During the pandemic, however, the city of Baku was closed, which affected business for cafes, restaurants and other tourism sites.

Vafadar Novruzov, a 48-year-old visually impaired man who lost his sight as a child, also says he had not lived a normal life before the pandemic.

“It's not just me, it's tens of thousands of people with disabilities. At most, only 100 of them are active, all other disabled people live as if under house arrest,” he says, noting that transition periods in the country usually make the situation worse.

“Every time the Ministry of Labor announces a new transition period, and as we pass new laws, we lose more and more of our rights,” he mentions.

Today, Vefadar, who lives with his 72-year-old mother, thinks that the situation will get worse after the pandemic.

“When we said the first transition period, it was as if we moved from our three-room house to a two-room house, and then in the second phase, we moved to a one-room house. Then we started living in basements. So the only thing we can do after this transition is to survive.”

His words seem to echo the philosophy of Michel Foucault. According to Foucault, authorities seek to ensure that individuals who disrupt the “normal structure” of society are not visible to the wider public.

As authoritative governments view the existence of these individuals as a contradiction to the norms of power, it is important that they remain hidden.

That policy plays itself out in a never-ending cycle of control and quarantine. The cycle continues irrespective of a pandemic. Always.

#Covid-19 #Azerbaijan
DONATE TO CHAI KHANA!
We are a non-profit media organization covering the topics and groups of people that are frequently ignored by mainstream media. Our work would not be possible without support from our community and readers like you. Your donations enable us to support journalists who cover underrepresented stories across the region.
DONATE NOW