Treating soldiers, one war at a time

Dr. Fakhri Jabrayilov, 54, was far from the fighting when the second Karabakh war broke out in September.

Fakhri, an ethnic Azerbaijani and intensive care specialist who has been living in Turkey since 2003, was at home in Istanbul when he heard the news. Before long he found himself on the frontlines, however, treating soldiers from both sides of the conflict.

“I saw savagery, I saw the highest level of savagery in the war. Man does his best to destroy man, and he destroys not only man, but nature, all living things, insects, and everything created by God. War was the last thing that happened to humanity,” he said.

This was not Fakhri’s first war.

A native of Lachin, Fakhri and his family were displaced during the first war (from 1988-1994).

Before the first war, Fakhri graduated from high school and entered Azerbaijan Medical University. Five years later, during the 1988 events in Sumgayit, he worked as a nurse at a hospital.

“We did our best to help the wounded Armenians brought to the hospital. I also served our patients and wounded during the events of January 20, 1990. I have gone through all these difficult periods,” Fakhri said.

The period following the first war was painful for Fakhri and his family: they were forced to abandon their home and seek shelter in Baku.

“We left everything there. There were 17 of us living in one house in Baku. We did not go hungry, but our lives changed from beginning to end,” he said.

“But in Baku, even though we were in our own country, we were labelled as refugees. ‘They left their homes’, ‘ran away’ and ‘were afraid’ – those are what we heard from our own people. People judged us without knowing the truth.”

Fakhri said when he learned Lachin had been reclaimed by Azerbaijan, it felt like a “heavy burden lifted.”

“I remembered my relatives who died before seeing their homes in Lachin. I felt their spirits rejoice. I will be able to return to our mountains again,” he said.

“We did not need a war. We lived side by side in both Armenia and Azerbaijan, we needed them, they needed us… If there had never been a war, both countries would be much richer and more perfect, and we would be able to do great things together.” 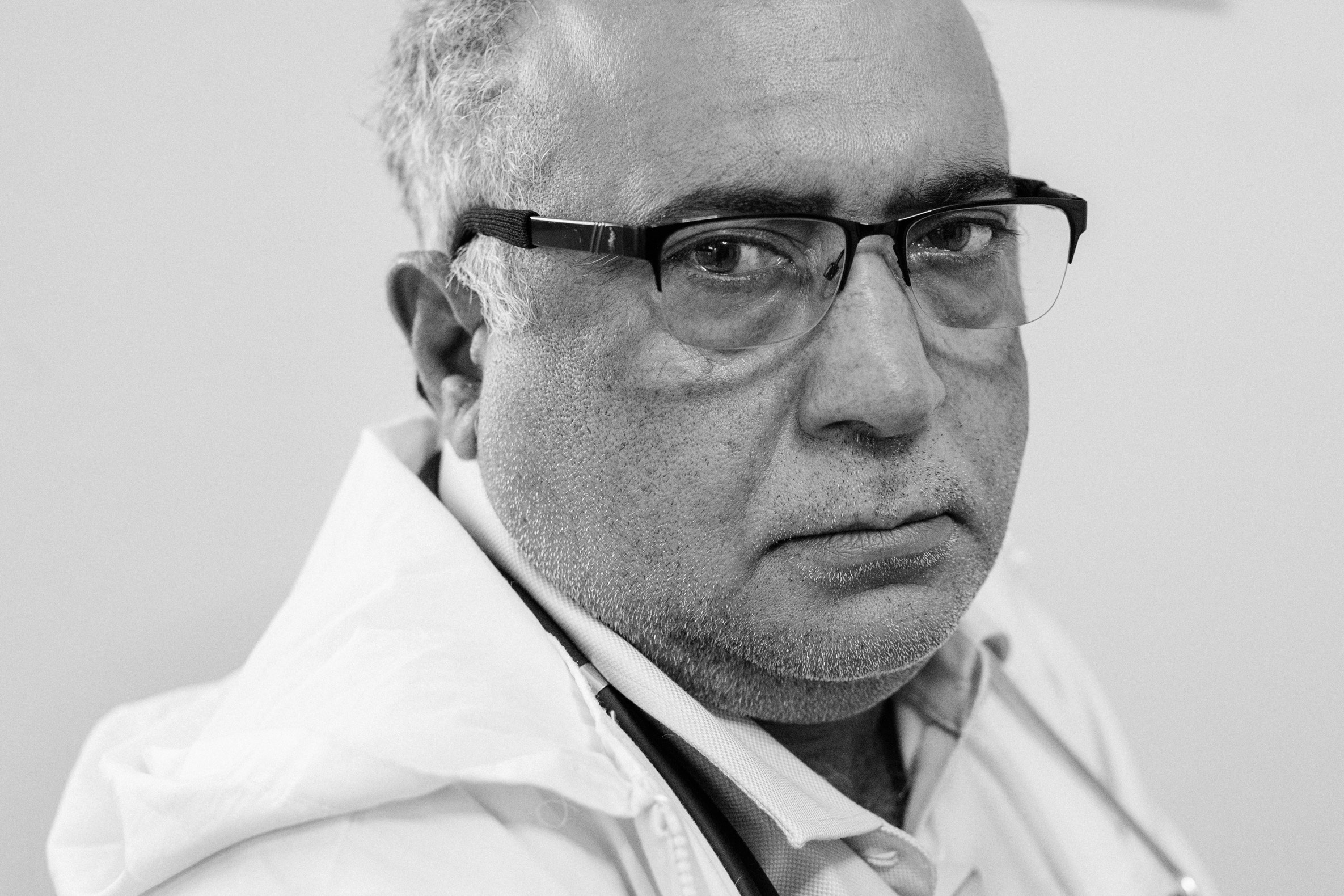 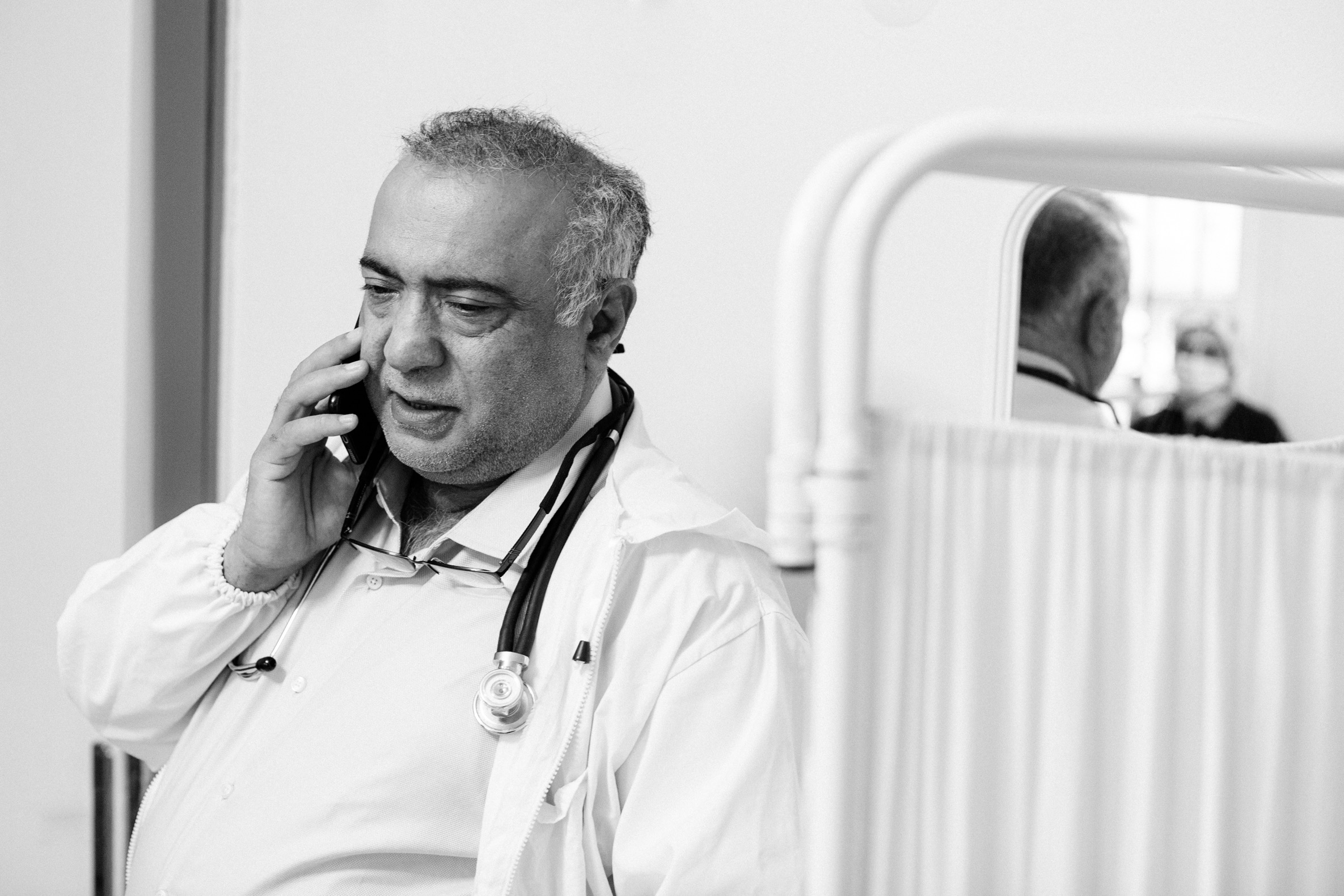 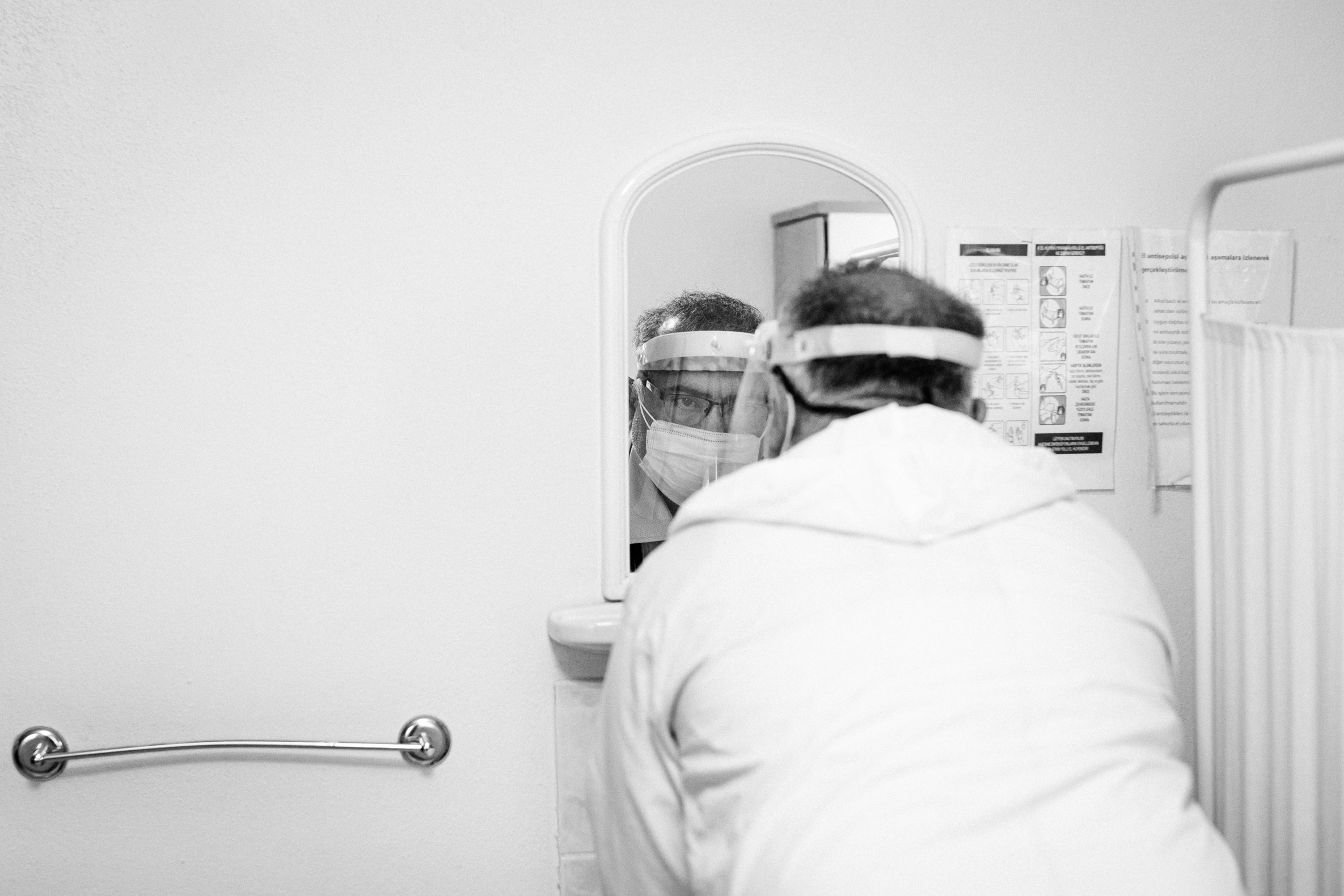 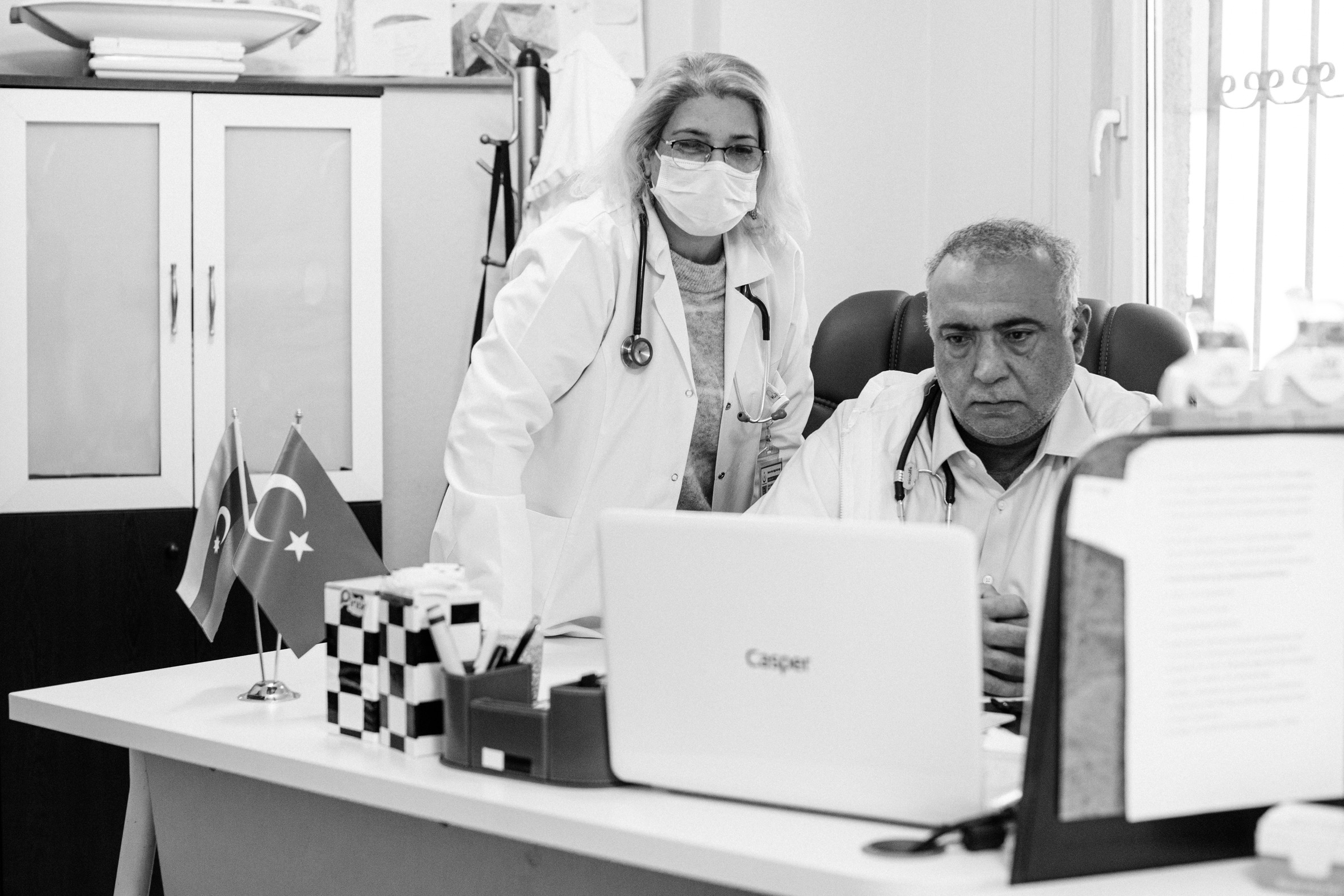 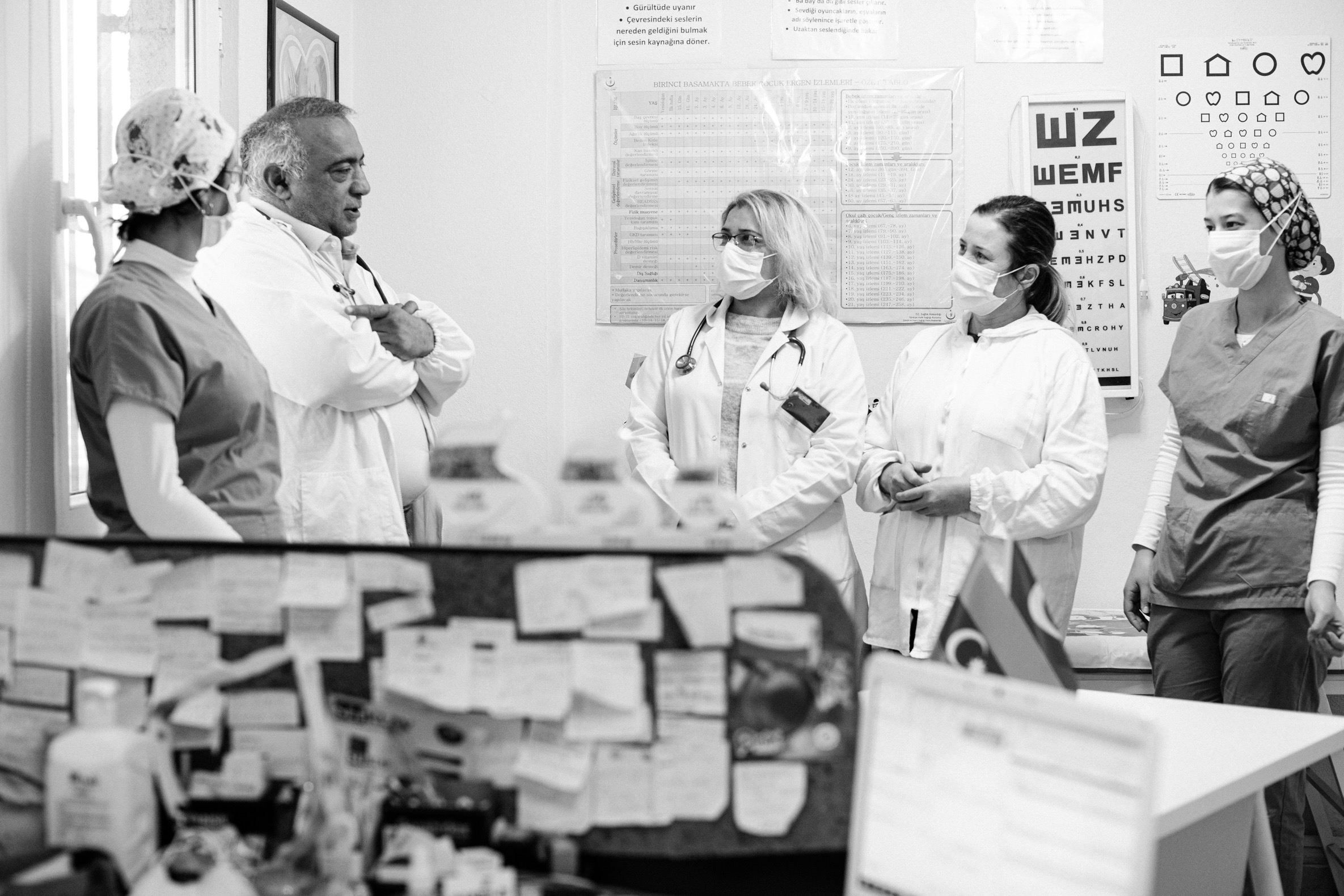 Dr. Fakhri Jabrayilov, 54, left his successful job as a doctor in Istanbul to treat soldiers on the frontline after the second Karabakh War broke out in September.
Fakhri was trained as a doctor in Baku but he is originally from Lachin, a district that Azerbaijan lost during the first war and regained as part of the ceasefire deal to end the second war in November.
“On the frontline we were treated Armenian servicemen, they were bright, young people. They were knowledgeable, intelligent youth. If they had not died, if they had not been wounded, if they had not been taken prisoner, they would have had a wonderful future. We don’t not know what the future of the people we lost would have been like and who they would have been. We lost them.”
There is no official information on how many doctors were sent to the war zone in Azerbaijan during the September war or how many doctors died in the war zone. Fakhri treated soldiers in three frontline districts for a month during the war.
While Fakhri was treating patients on the frontline, a colleague took care of his patients in Istanbul. Today, back at work in Istanbul, the doctor is getting back to his usual routine.

Yagut Garayeva, the head of the Disease Control and Prevention Department of the Medical Territorial Units Management Association (TƏBİB), told 7news.az that the Association has special medical brigades working on the frontlines “Today, our doctors are trying to work in the frontline. We have doctors who go voluntarily,” Garayeva said.

Fakhri was one of the volunteers. He left his practice in Turkey with a colleague, and headed to Azerbaijan in September. In total, he ended up spending a month treating soldiers in three frontline districts: Fuzuli, Jabrayil, and Gubadli.

He said the situation in the frontline hospitals was not perfect but the association tried to provide what the doctors needed.

Today, nearly a month since the fighting ended, Fakhri can still remember the soldiers he treated during the war.

“There was a soldier who was wounded in the stomach during a battle, and he said, ‘Either you sew the wound, or give me a needle, I will sew myself and go back to the battle.’… I remember another soldier who had both legs amputated and one of his hands was likely to be amputated. He was a Bakuvian. I brought him to the hospital in Baku. He talked to his father on the way. His father was asking him several times, ‘Are you on your feet, are you on your feet?’,” Fakhri recalled.

“When I returned, I contacted them and they said he was good. When I'm in Baku, I will visit the family and meet him.”

The men who he cared for were too young to be sacrificed in battle, he said.

“Perhaps the people who died in these wars could have done good things for the world. We have destroyed a generation of 18-20-year-olds. Who needed that?” he asked.

Disclaimer: Chai Khana is sympathetic to the views and feelings of the communities on both sides of the conflict. We understand that some of the material in this edition may offend readers. Our hope is that by giving journalists a platform to write honestly about their experiences during these difficult times, we will help foster dialogue.

Check out how the war affected a family of Armenian doctors: A family on the frontlines

This article was prepared with support from the Friedrich-Ebert-Stiftung (FES) South Caucasus Regional Office. All opinions expressed are the author’s alone, and do not necessarily reflect the views of FES or Chai Khana.

#war #Azerbaijan #Nagorno–Karabakhwar
DONATE TO CHAI KHANA!
We are a non-profit media organization covering the topics and groups of people that are frequently ignored by mainstream media. Our work would not be possible without support from our community and readers like you. Your donations enable us to support journalists who cover underrepresented stories across the region.
DONATE NOW

Forced to leave their homes after the 2020 Karabakh war, thousands are adjusting to new lives with limited assistance.

One year after Karabakh war, displaced eke out new lives

Letters to the Caspian Sea

Left to their own devices, Azerbaijanis with loved ones in Mariupol initiated Whatsapp groups to seek missing relatives.

Families struggle to help Azerbaijanis in a besieged Ukrainian town