The female identity in art

In her 2020 woodcut “Uncertainty,” artist Shahnaz Agayeva uses a woman’s hair as a metaphor for struggle.

Long hair is a powerful symbol in mythology, where it is associated with womanhood and motherhood.

The graceful lines of waves and waves of hair frame the woman’s body. While the waves appear sensual, in fact they represent the woman’s misery, her inability to find peace, Agayeva said.

“In this image the hair of a woman has wrapped up her whole body and is not well-groomed. She combs her hair to take care of her hair,” she explained.

“The woman has many questions but it is difficult to find answers. She thinks that if she straightens her hair, she can put her life in order.” 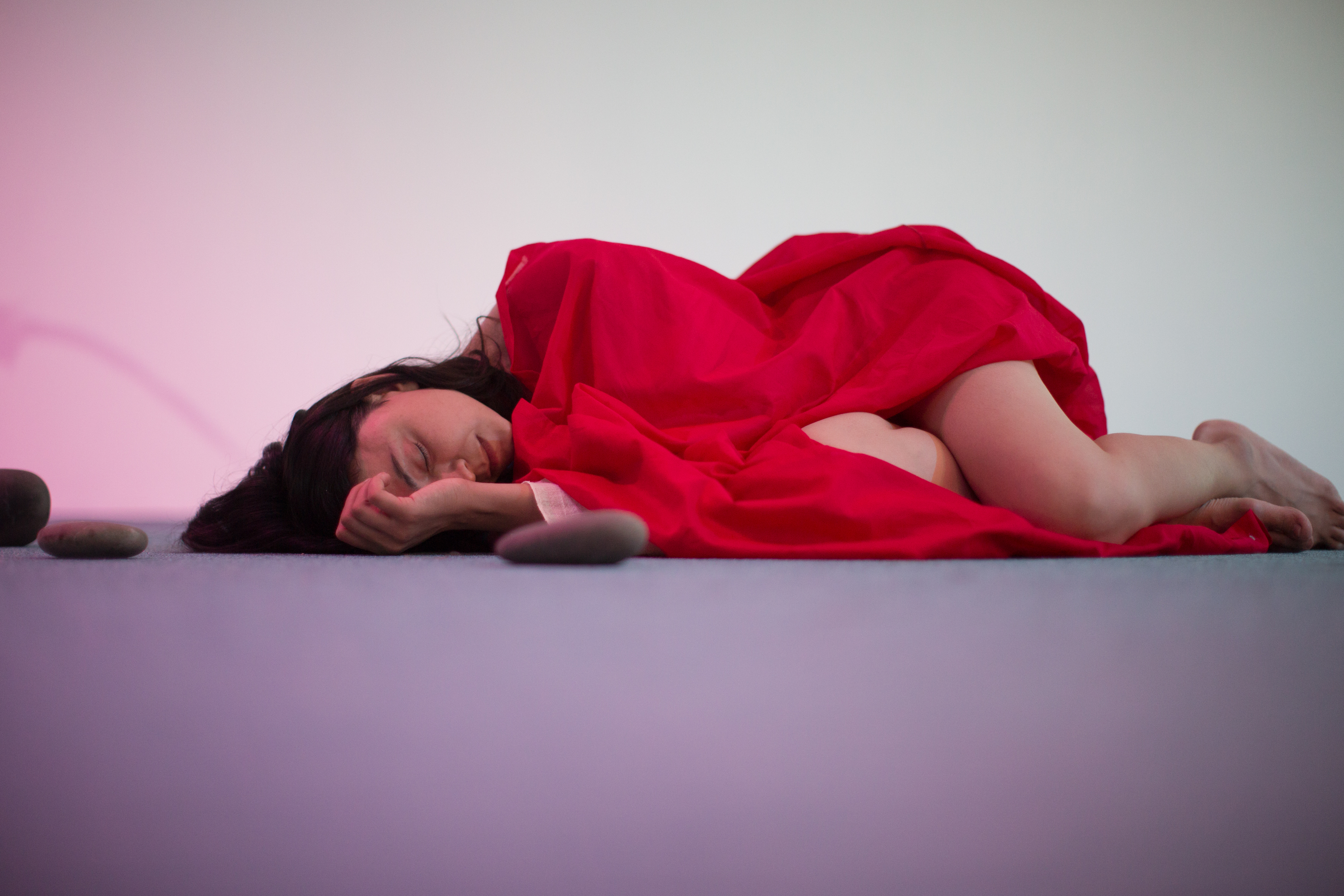 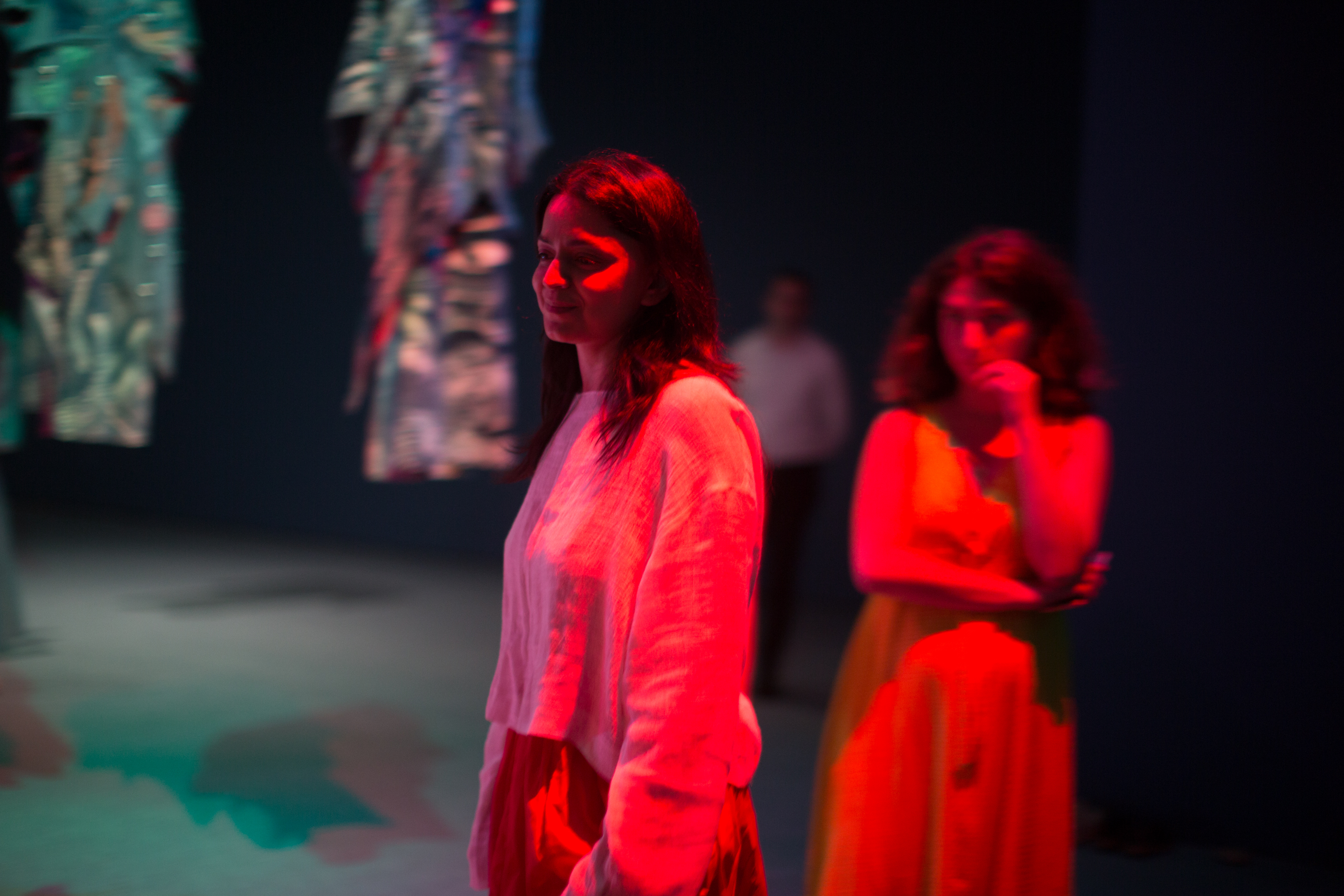 Agayeva usually uses her art to depict the nature of women, their inner sufferings, and their struggle for freedom in her conceptual works. The artist protests against the injustices and oppressions against women in the society where she lives, and highlights gender issues.

“My protest started in childhood. The violence in our family and in my personal life is reflected in my works. If I don't find myself in a work, I can't create it.”

Agayeva is part of a new generation of Azerbaijani artists who are using their talents to address gender issues and problems facing women.

She and others are following a tradition that started in the country a century ago, but was long repressed. 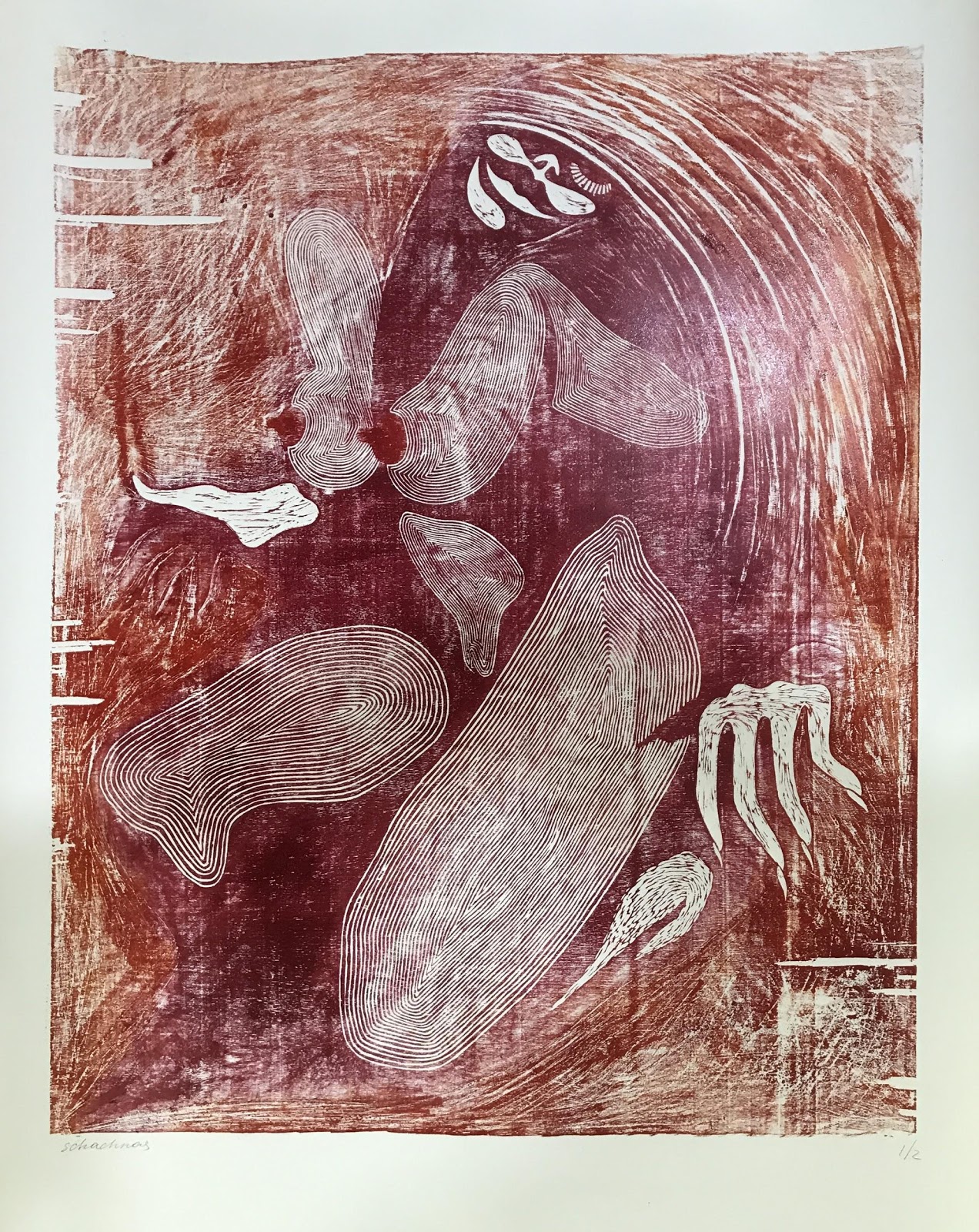 Agayeva usually uses her art to depict the nature of women, their inner sufferings, and their struggle for freedom in her conceptual works. The artist protests against the injustices and oppressions against women in the society where she lives, and highlights gender issues. “My protest started in childhood. The violence in our family and in my personal life is reflected in my works. If I don't find myself in a work, I can't create it.” Agayeva is part of a new generation of Azerbaijani artists who are using their talents to address gender issues and problems facing women. She and others are following a tradition that started in the country a century ago, but was long repressed.

Early examples of Azerbaijani artists tackling gender issues can be found in the beginning of the 20th century, first on the pages of Molla Nasreddin, a satirical magazine used political cartoons to publicize the problems facing Azerbaijani women in the country’s patriarchal society, including lawlessness, illiteracy, and early marriage.

It was a radical shift for artists in the country; prior to that, Azerbaijan art was dominated by decorative paintings and portraits based on the Tabriz miniature school. 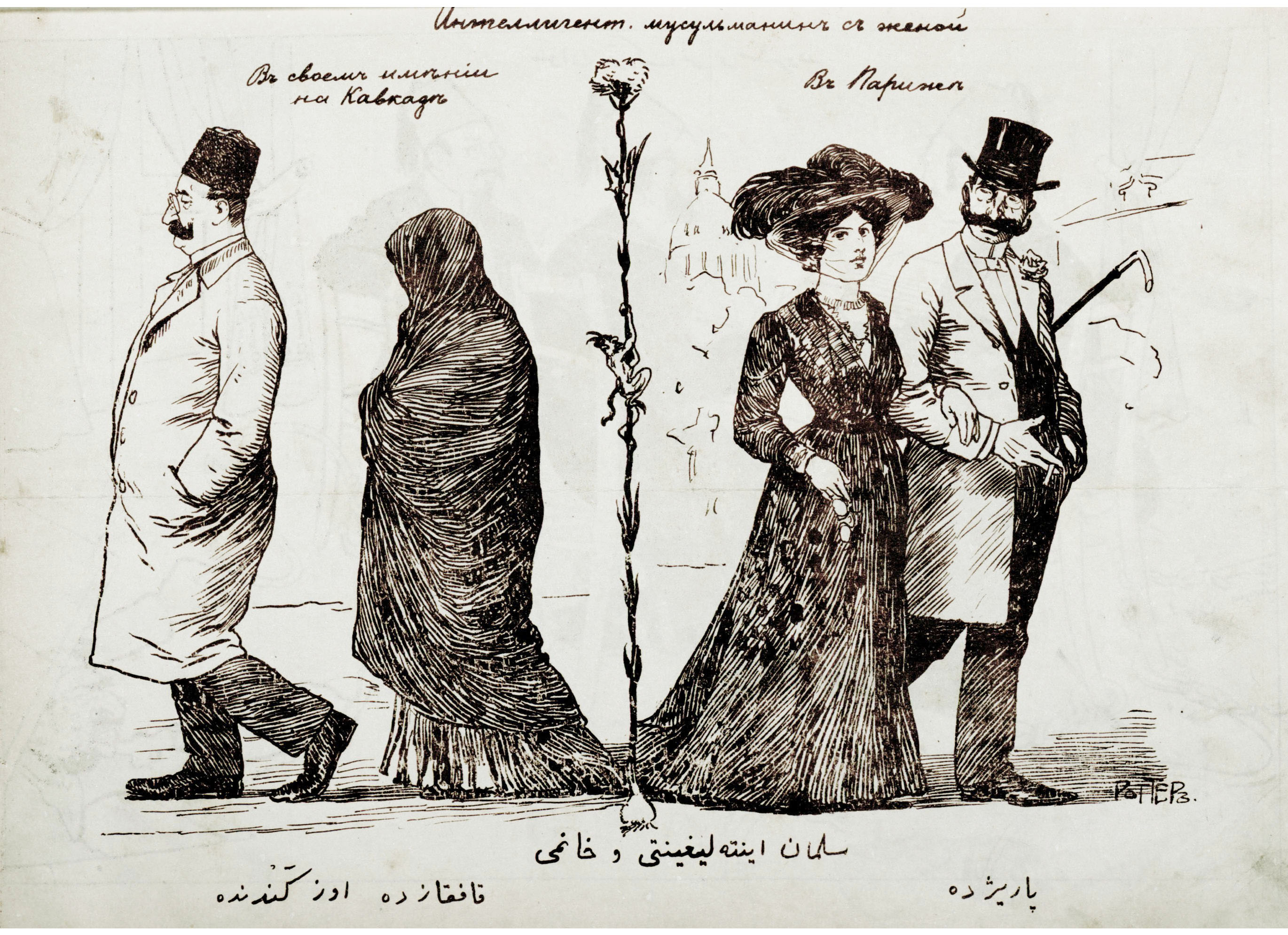 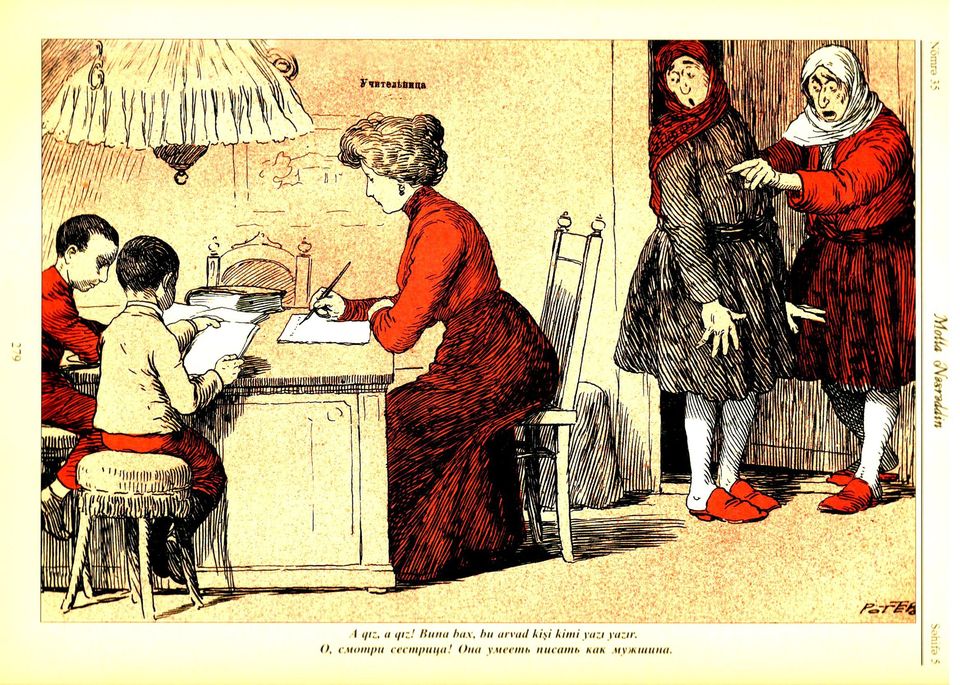 Women in the country found space to speak publicly and openly about the issues that concerned them.  Artist Gazanfar Khalikov included women in his piece "Council of women 1930," a first for the genre. The work, which depicts women's struggle for their rights and freedoms, was a sign of revolutionary change in society. 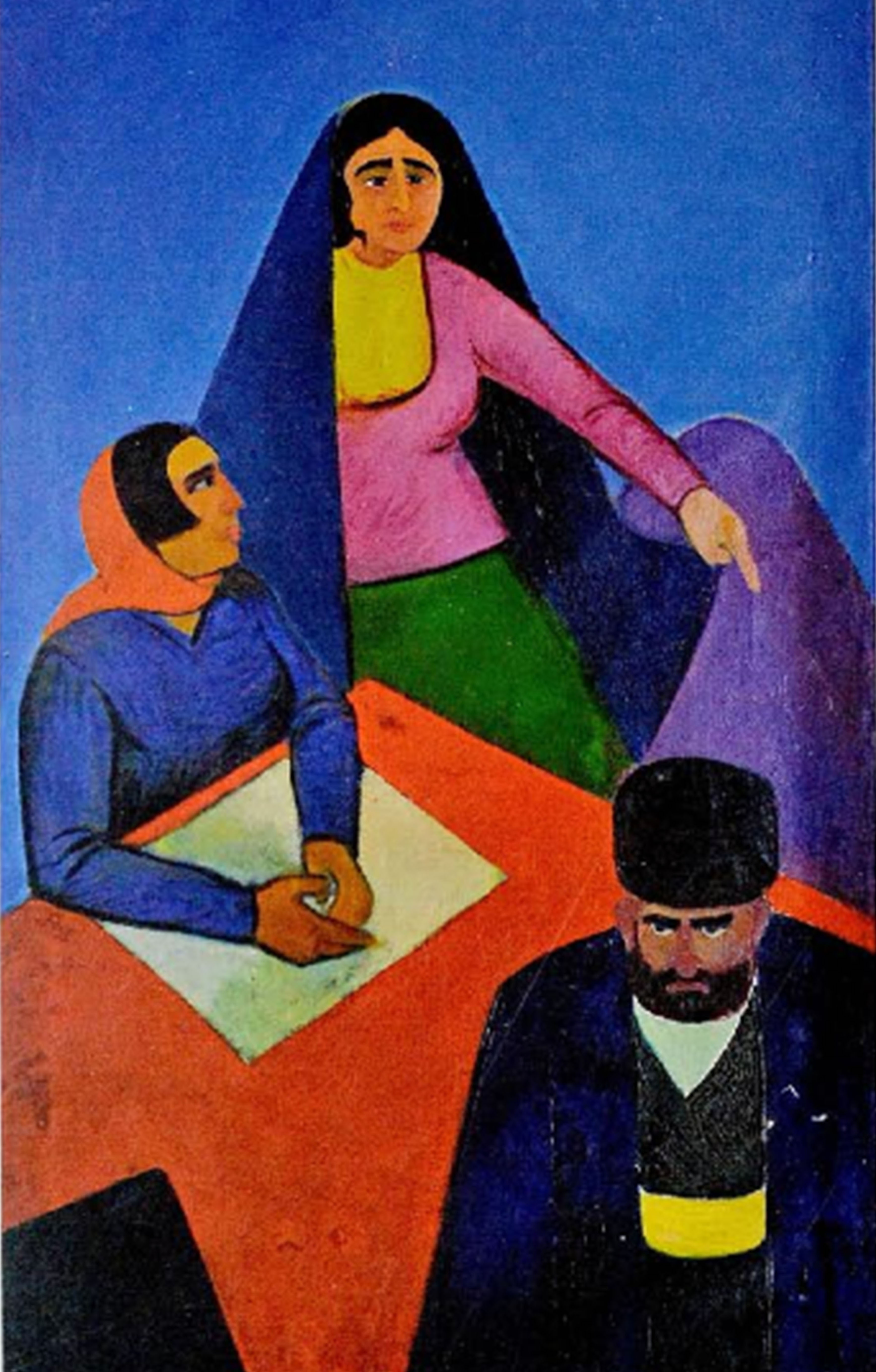 "Council of women” by Gazanfar Khalikov, 1930 In the Soviet era, a woman's freedom was defined by her role in society as a positive hero - a hard-working woman.

But by the mid-1930s, artists in the Soviet Union started to conform to the school of socialist realism. Any other type of artwork was viewed as an enemy of the Soviet ideal; artists felt a patriotic duty to create art showing the life of working people in a positive light.

"In the Soviet era, problems were not addressed in art, because the Soviet Union did not like such things in the system. In painting, the only genre that could touch social problems was caricature,” said Teymur Daimi, an artist who teaches at Azerbaijan State Art College at Academy of Arts in Baku.

“Artists in Azerbaijan gradually began to work on social issues in the 1990s, after independence.”

It took another 15 years for Azerbaijani artists to really start addressing gender issues, however, according to Agil Abdullayev, a visual artist and researcher.

Abdullayev, who created "Chagdashcilar" (Contemporaryists), a creative criticism platform, said the Azerbaijani art world is not strongly influenced by what is happening in the global art community—local artists tend to identify the issues that matter to them, and they feel comfortable addressing.

"Unfortunately, global trends do not affect Azerbaijani art. For example, feminist art in America was created by the Guerrilla Girls after the 1960s. This wave affected the whole world. But Azerbaijan had a different approach to such issues. We had our own tendencies," he said.

It was during this period that women artists also started to be recognized, he said. Over the past several years, new independent artists have collaborated and their work has energized a new wave of creativity in the local community. Several venues have been created in the past decade, including Wings of Time (2000-2009), Yarat Centre (2011) and Salaam Cinema Baku (2019), which are all in the capital Baku. 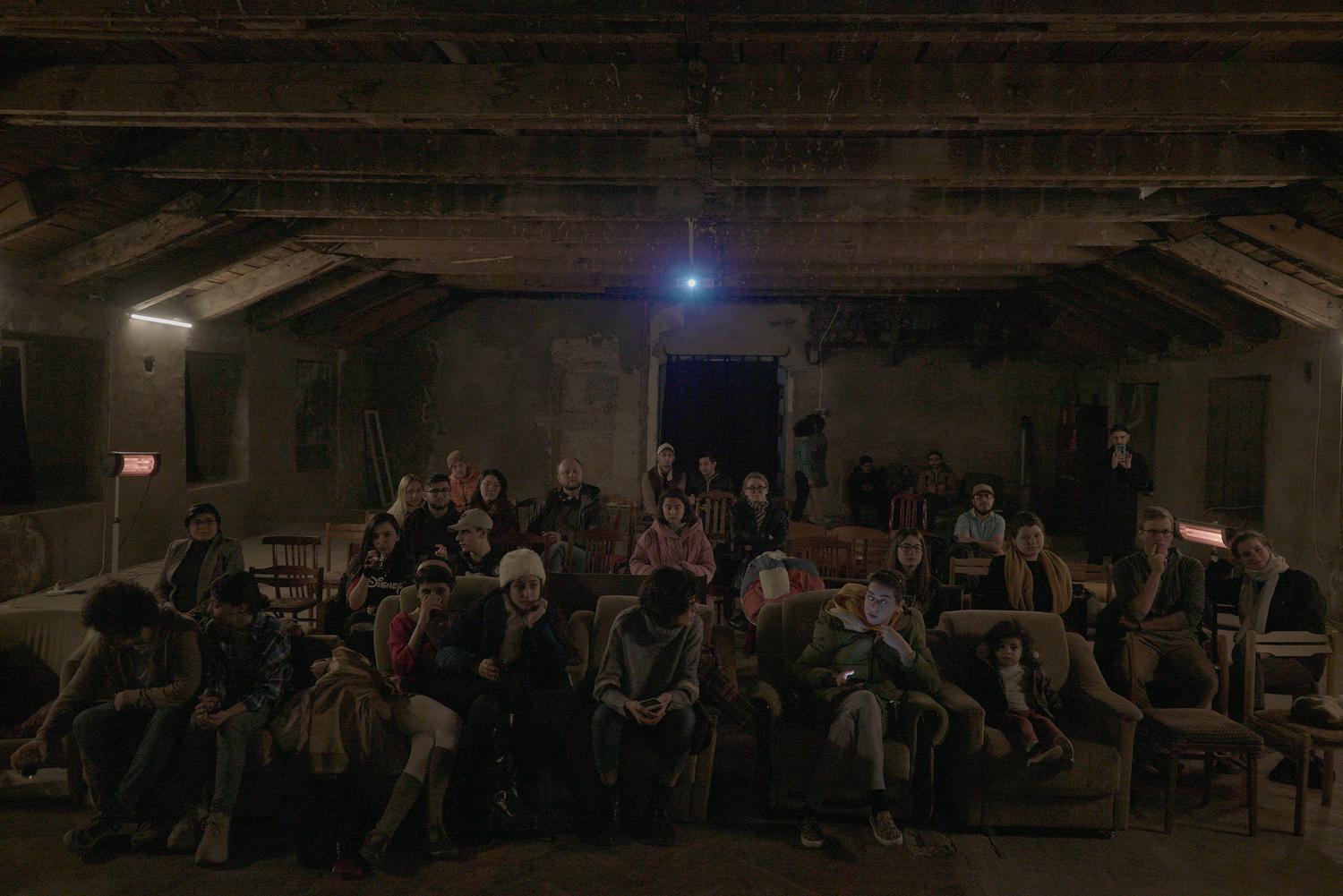 Salaam Cinema is one of the most popular alternative creative venues in Baku for young artists. The cinema hosts events related to gender issues and supports artists. Photo courtesy: Hesret Ramazanov/Salaam Cinema Baku

Independent artists are able to show their work in new and innovative ways in these venues, unlike the more traditional state exhibition halls and galleries.

"In 2014-2015, activism began to change its role in Azerbaijan. It began to manifest itself not only in politics, but also in social and cultural life,” Abdullayev said.

“People already knew that activism is not just about taking to the streets and holding rallies. There are many things that can be done. Of course, this has affected the work of artists."

Lesley Gray, a Dubai-based curator who works with artists from the Caspian region and collaborates with VarYox venue in Baku, said artists in Azerbaijan are part of a “global shift” to address gender in their work.

"Different kinds of movements are happening around the world and in the Caucasus too. I think that Azerbaijan is very much part of the global shift towards focus on gender,” she said. “It is also generational;  younger artists are more likely to push back against social values where they see friction with their own experiences and aspirations.” 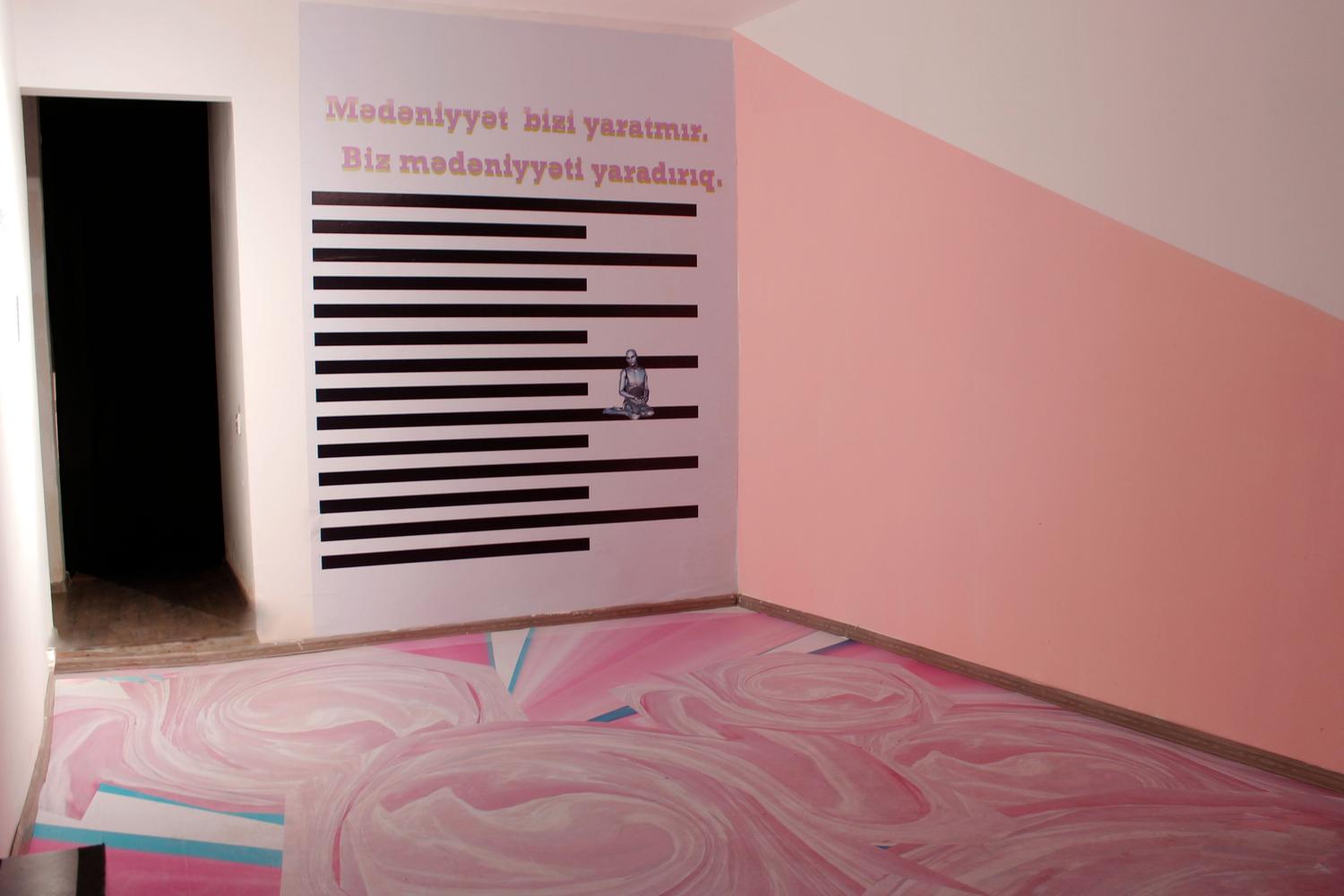 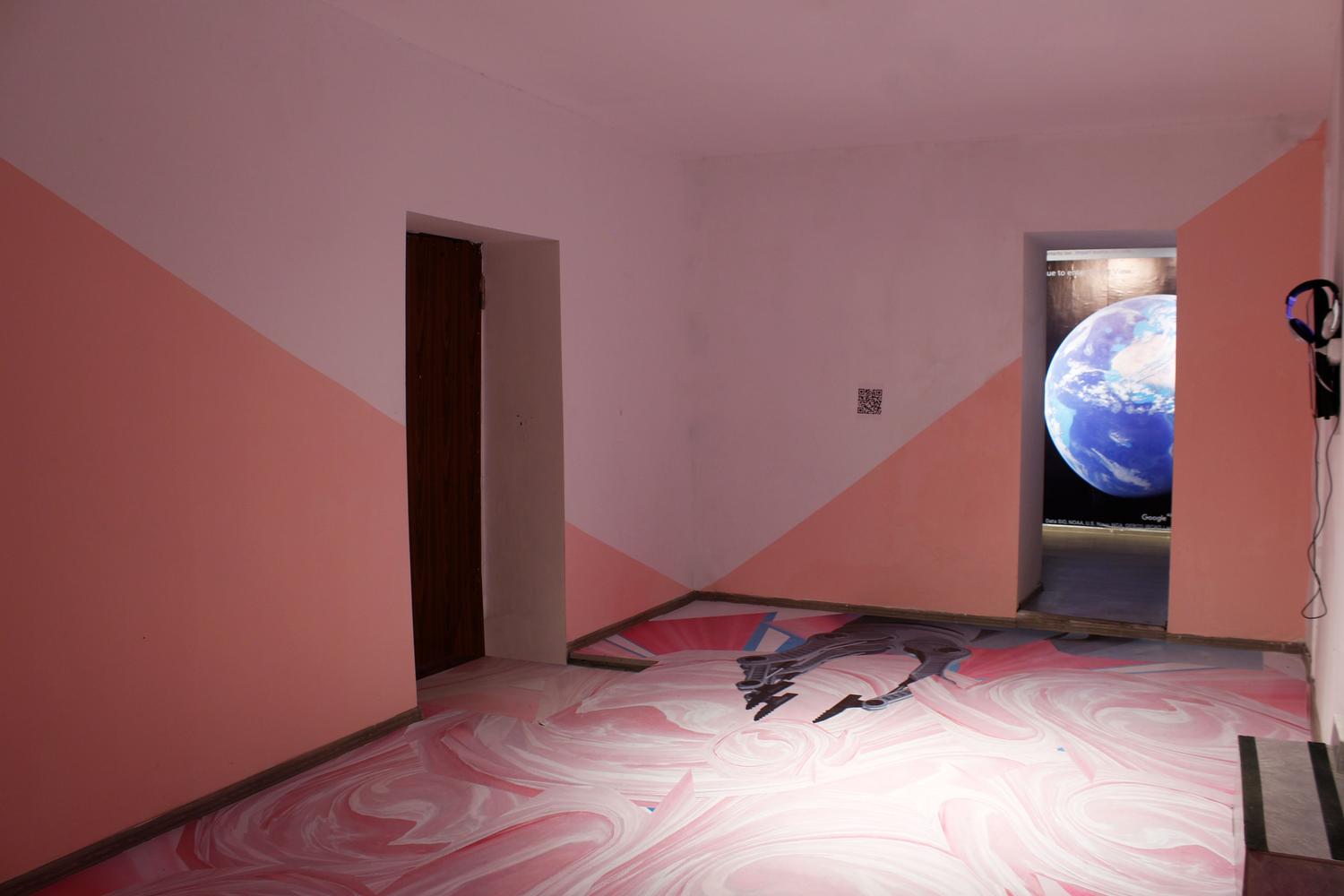 Photos from Agil Abdullayev’s solo-exhibition “Shy boy of the pink future” in Baku, 2018. “During this research, I asked how contemporary culture both enables and limits our identity and redefines a progressive community. The work suggests that the transformation of identities and communities must be built from social and cultural practices that seek to redefine our identity politics in a frameless manner. I think reconceptualizing the notion of identity goes beyond any limits and categories that characterises the nature of our national identity.”
Images: Personal archive of Agil Abdullayev

Sabina Shikhlinskaya is one of the Azerbaijani artists who is increasingly focused on gender in her work.

"In contemporary art, women are treated differently. It raises problematic issues and touches on social problems,” she noted.

In 2019, Shikhlinskaya curated the art festival "Maiden Tower''.  To be a woman," which was dedicated to the 100th anniversary of the freedom of Azerbaijani women and their role in the modern world. It was the largest gender-themed art event ever held in Azerbaijan.

"Maiden Tower. To be a woman" was not an ordinary festival exhibition, but an action dedicated to gender equality, it was a provocative action to shake society, she says.

And it did create a scandal. Shikhlinskaya chose to hold part of the festival in the former Art Production Complex of the Union of Artists of Azerbaijan—a place that had once been full of women artisans but had since been turned into car repair shops.

“Not only was the art gone, even women were gone from there. It was very strange to me. I wanted to bring back both art and women…not physically, but with graffiti and murals,” she said.

“I wanted to create an art center again. I did it. Both local and foreign artists and graffiti artists created their works on the walls of the building. One of these cases was very scandalous. A foreign artist created a huge image of a transgender on the wall… Young people were interested, they came there and took pictures. But the provocative work of the artist was not accepted by some of the audience. Two or three days later, the painting was painted over and covered.”

Shikhlinskaya noted that the public conversation about the piece was “interesting.”  “It was not a war, it was a confrontation. There were different opinions. On social networks and TV, people were arguing and discussing the work,” she recalled.

But other artists complain there the public response is often repression, not discussion.

Artist Gunel Ravilova has said there have been shows that have decided not to show her work if it includes naked women, especially at state exhibition halls.

"I can't show almost half of my work. There are works that are in sketches and I don't know how I will be treated if I exhibit them,” she said.

“I wanted to do portraits of the women who are forced to cover their heads. But people around me said it would be a problem for me."

In a series of works done in the pop art genre, the artist Irina Eldarova presents gender roles and expectations in a humorous style. Through the image of Marilyn Monroe, she depicts a woman both as an object of beauty and emphasizes women’s desire to “catch” rich, successful men. (2013)

Artist Shahnaz Agayeva, who created “Uncertainty” about a woman struggling to find freedom and peace, says that not all artists feel comfortable addressing gender issues in their work because private exhibition halls and platforms do not accept paintings that run afoul of traditional social or religious values.

"There is a gap between the audience and artists, a problem of communication. This is due to weak PR in art, a lack of art magazines, blogs, criticism in Azerbaijan,” noted artist Vusal Rahim.

Rahim focuses on women's issues. His multimedia project "Black woman" (2013) is dedicated to the image of a housewife isolated from society, a woman who has become an "object" of the house. One of Rahim's biggest projects was the performance "Nurjan" (2018) dedicated to early marriage. 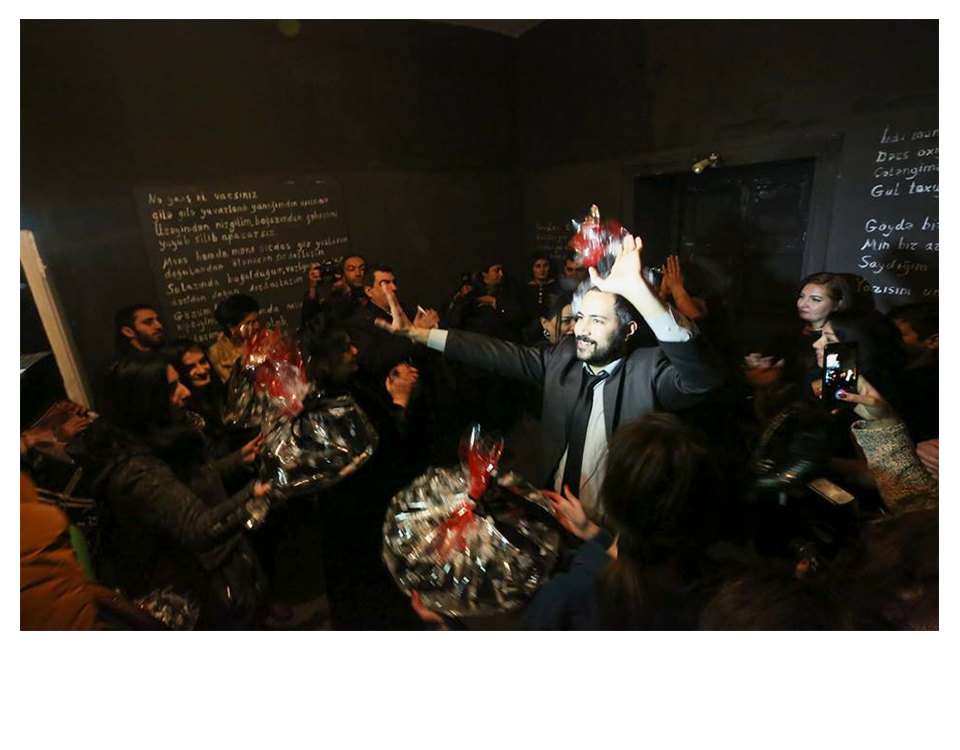 Artist Vusal Rahim focuses on women's issues in his art. His project "Nurjan" (Black wedding) (2018) was dedicated to a young woman who was forced into an early marriage in Azerbaijan. Image: Personal archive of Vusal Rahimov

Curator Lesley Gray noted that artists—in Azerbaijan or elsewhere—can play the role of activist if they use their talents to start conversations, increase awareness and create a more inclusive society.

However, to make a difference, artists need to reach a wider community, she said.

"Artists often only speak to a small audience of other artists and their art scene peers. People who could most benefit from these conversations are often very far from the art scene itself,” Gray said.

Rahim agreed. “There should be open discussions so that our work becomes public. Unfortunately, exhibitions are visited by the same crowd, the same people view every event.”

Agayeva goes even further. “"Our works remain between four walls,” she noted.

“We need to go outside these four walls in order to  present social problems.”

#Azerbaijan
DONATE TO CHAI KHANA!
We are a non-profit media organization covering the topics and groups of people that are frequently ignored by mainstream media. Our work would not be possible without support from our community and readers like you. Your donations enable us to support journalists who cover underrepresented stories across the region.
DONATE NOW