Between satire and censorship: Political cartoons in the South Caucasus

Most people are used to reading reports on all these topics in the media today. But few are aware that artists in the South Caucasus were addressing these issues on the pages of satirical magazines a century ago.

Some political cartoons drawn by Armenian, Azerbaijani and Georgian artists in the early 1900s were more critical than the work published in local newspapers today.

During the first two decades of the 20th century, the three countries experienced a short period of independence almost simultaneously. Revolutions in the Russian empire created grounds for liberation movements in the region; there were also a series of ethnic and regional confrontations between Armenians and Azerbaijanis. Major political players, such as Germany, France, Great Britain, Ottoman Turkey, and Russia were trying to carve out positions in the South Caucasus.

This analysis, prepared with the help of researchers across the region, does not aim to review the historical nuances of these three different countries. Rather, it seeks to shed light on how political cartoons were used to raise issues and challenge authority and culture norms at a time when Armenia, Georgia, and Azerbaijan were building national identities against a backdrop of external and internal political, religious, and economic tensions.

Some of the greatest names in the region for the period (including Shalva Kikodze, Lado Gudiashvili, Azim Azimzade, Gigo Zaziashvili, Oscar Shmerling) used their talent to shed light on relevant, but largely taboo, topics through symbols and wordplay.

These artists were following an ancient tradition, albeit one that has not always been respected as much as classical drawing and painting.

Victor Navasky, the author of the book The Art of Controversy: The Political Cartoons and their Enduring Power, noted that political cartoons have always been considered a poor art in the sense that its elements can be easily understood by the lower classes. It was easy to spread to a wide audience, even to those who cannot read and write.

But Annibale Carracci, a caricaturist from the 16th century, argued that caricaturists and classical artists face the same task.

“Both see the lasting truth beneath the surface of mere outward appearance. Both try to help nature accomplish its plan. The one may strive to visualize the perfect form and to realize it in his work, the other to grasp perfect deformity, and thus reveal the very essence of a personality. A good caricature, like every work of art, is more true to life than reality itself,” Carracci said.

The term caricare itself means “to load”-- it carries meaning and once pulled, it travels fast and results in sharp impact.

“What you want to do is to cause that person damage. But not lethal, physical damage. If you can psychologically damage someone then you are really doing something. I am all for that. It’s the story of every serious satirist,” he said.

The idea of political cartoons as something sharp, a form of weapon, was visible in magazines circulated in Georgia, Armenia and Azerbaijan in the beginning of the 20th century, as illustrated by their titles: Devil’s Whip, Needle, Bee, Torch, Awl, Flick, Sa-Da-Na, etc. The entire magazine, from the title to the content, aimed to create “visual trouble,” Navasky noted.

In the beginning of the 20th century, the printing press made it possible to spread political ideas around the region through visual media such as cartoons and caricatures. Irakli Khvadagiani, a researcher from Sov-Lab, said using illustrations in political publications was part of a wider strategy to reach a broad audience.

In the Russian empire, censors were eager to quash material when the subject matter was too political, he said. But well-crafted political cartoons were more difficult to define as politically unacceptable.

In addition, the level of literacy was still low, so a simple drawing without text would guarantee that message would reach a mass audience: “caricature, as well as, image in general directly talks to people. Drawings and images are languages of direct communication,” noted Khvadagiani.

Tural Hamid, an Azerbaijani historian, noted that, unlike social and political issues, criticizing religious fanaticism and clerics was more tolerated in the empire.

Political cartoons targeted religious leaders in all three countries, including in Muslim populated areas; unsurprisingly editors and authors received threats and at times were banned from publishing certain political cartoons. In extreme cases, publications were closed. 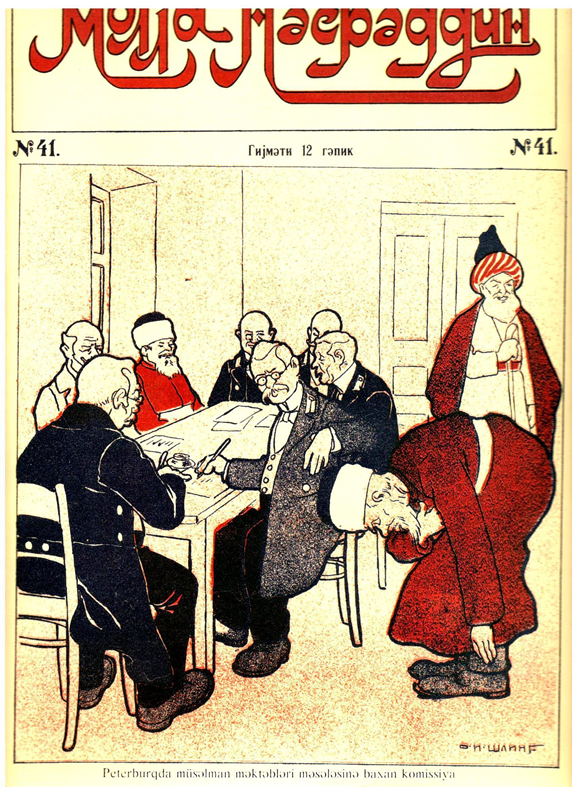 Gulya Khaki, a Molla Nasreddin researcher from Azerbaijan, found a political cartoon depicting a Muslim who is ready to accept to any decision made at the commission on Muslim schools in St. Petersburg.

Researcher Yusif Ismayil says that, Russian rulers opposed educating Azerbaijanis or the local Muslim people. Although the intelligentsia made many suggestions to improve the level of literacy, they were always ignored by Russian rulers, who encouraged the influence of the clerics. 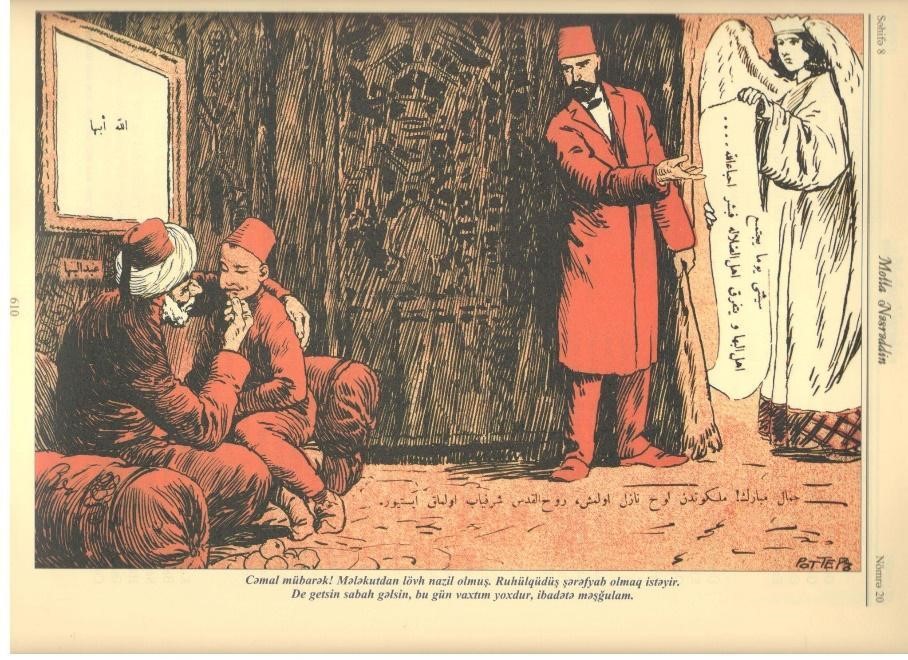 - Happy Jamal! A plaque was sent down from the angel. The Holy Spirit wants to be honored.

- Let him come tomorrow, I do not have time today, I'm busy with worship.

Published in 1913 in the controversial magazine Molla Nasreddin, this political cartoon accused a Muslim cleric, Abdul Baha'i, of pedophilia. According to researcher Gulya Khaki, on the day of publication, the Tbilisi Committee for the Press decided to confiscate all copies of that issue. The copies were sent to the committee for consideration. As Khaki notes, the poem High School Boy was also published in the same issue. “Both this cartoon and the poem High School Boy concerned the dignity of the Baha'is.” As a result, Deputy Editor of Molla Nasraddin Aliqulu Najafov (Gamkusar) was jailed. The editor of the journal, prominent Azerbaijani satirist and writer Jalil Mammadguluzadeh and other employees of the magazine, had to attend court several times, although the magazine survived the censors until 1914. It restarted publishing in 1917.

The publications also covered political issues, often using symbols, like animals, to depict large countries and imperial/colonial forces. Bears and wolves were the most frequently used; bears represented Russia. All three of the South Caucasus countries used the bear to depict a hidden threat. 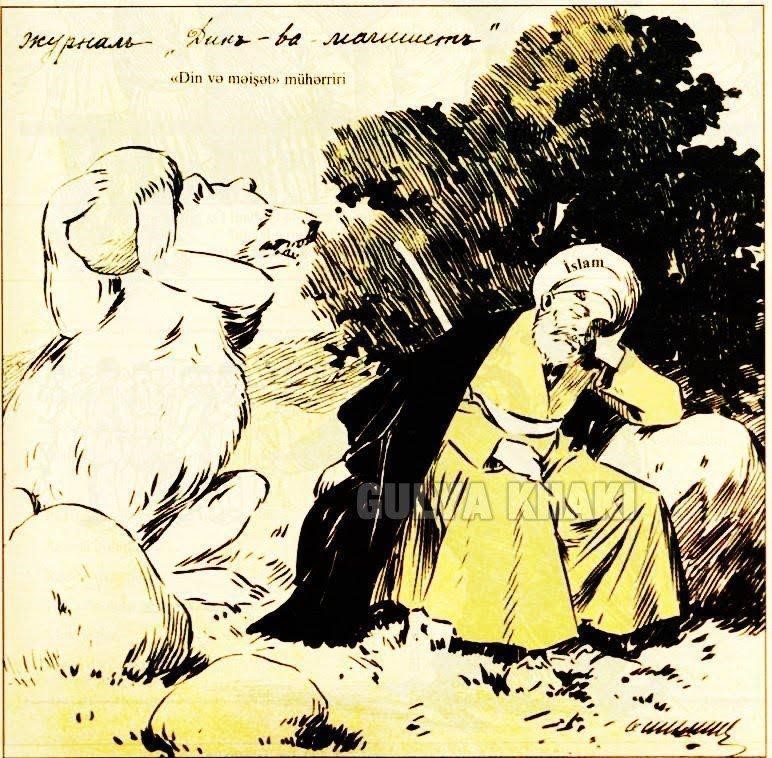 Molla Nasreddin, 1909. Friendship of the Bear 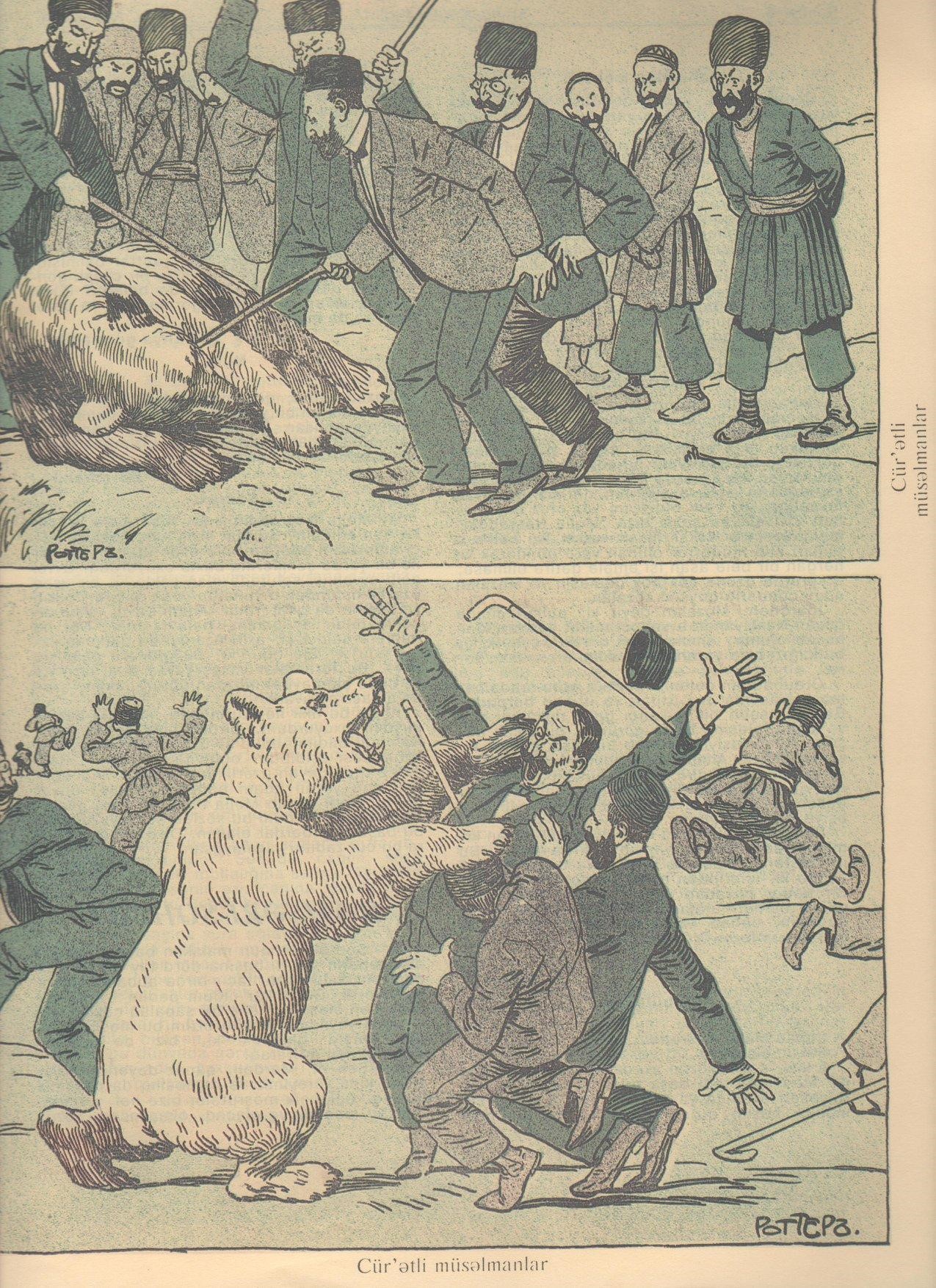 Yusif Ismayil, an independent researcher from Azerbaijan, said the political cartoon Brave Muslims showed a group of dissatisfied Azerbaijanis “gathering their courage and raising their hands against the Russians in the form of a ‘polar bear’ to try to show their strength. However, this step results in an attacking ‘Russian bear,’ which always causes them to flee in panic with feelings of fear and helplessness.” 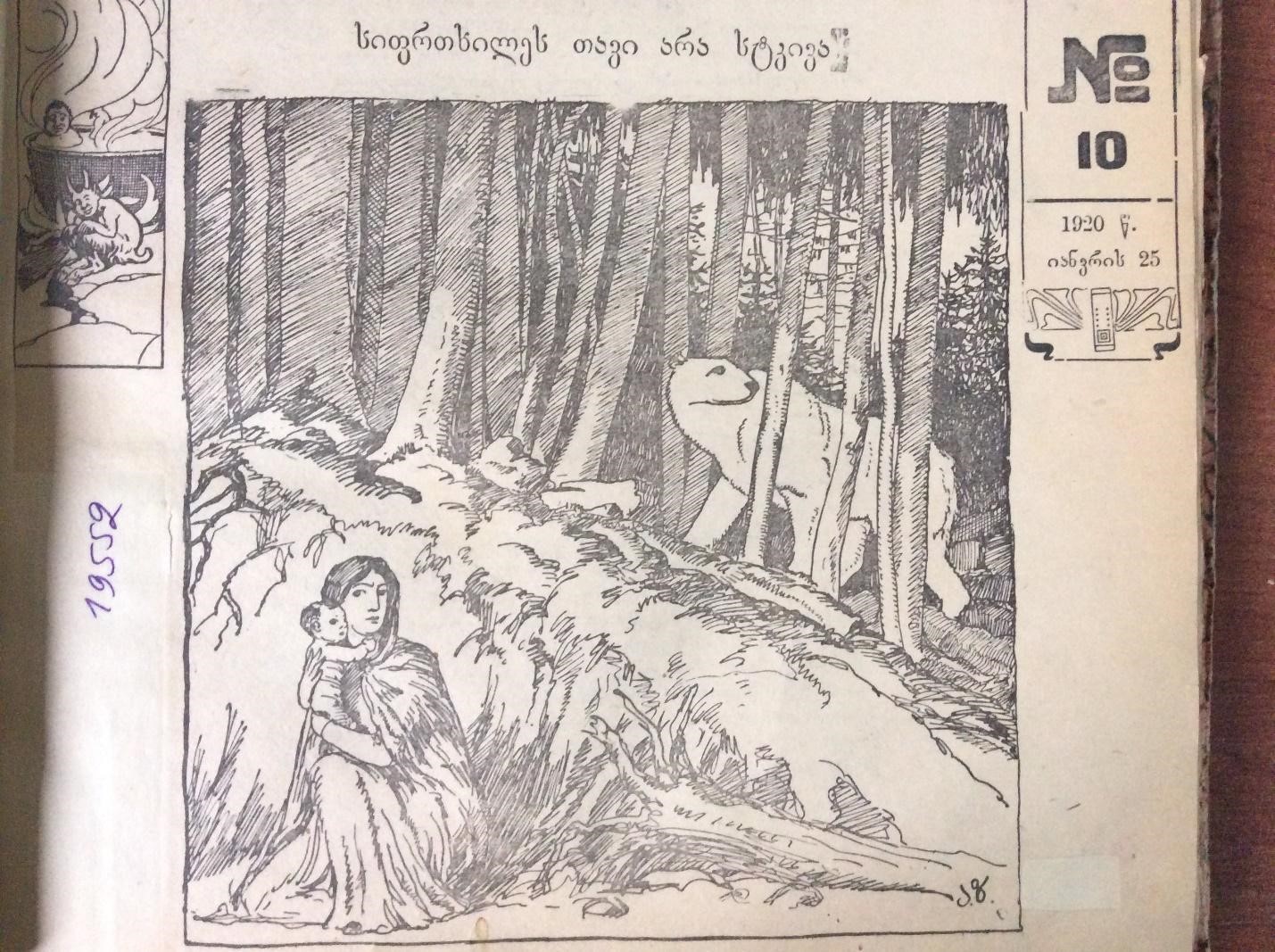 Devil’s Whip, 1920. It is always better to be safe. “Georgia to its independence: Be quiet, my child, be quiet! See? Can't you hear he is wandering in the middle of the woods?”

This political cartoon is one of many that illustrate the threat felt from the Communist Party. From 1918-1921, Georgian political cartoons depicted communists as bugs who spreaad plague and death. 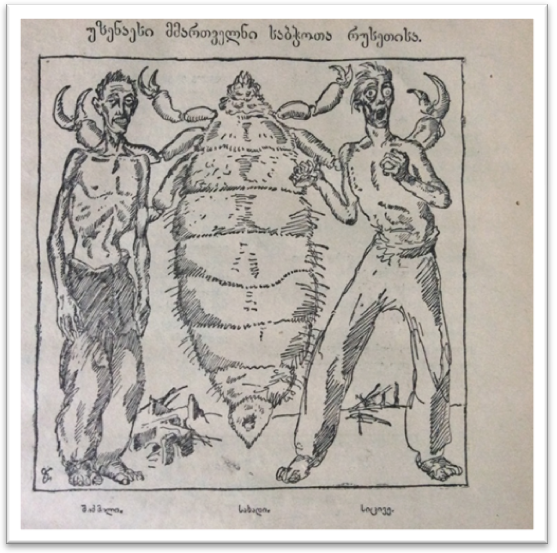 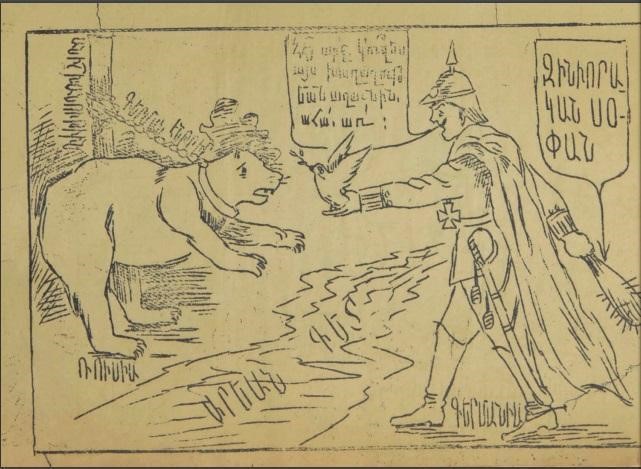 In this caricature, the bear represents Russia, and the soldier represents Germany. A river of the blood separates them. The soldier holds a dove and asks the bear if he wants to take the dove of peace and move toward a peaceful coexistence, even as he holds a weapon behind his back.

Geopolitical wars are a major theme for all three countries, but Azerbaijan seems to be the most sensitive to this issue. As Azerbaijani Muslims were under the strict control of Ottoman Turkey, Molla Nasreddin attracted readers by focusing on Ottoman Turkey foreign affairs and its regional policy. 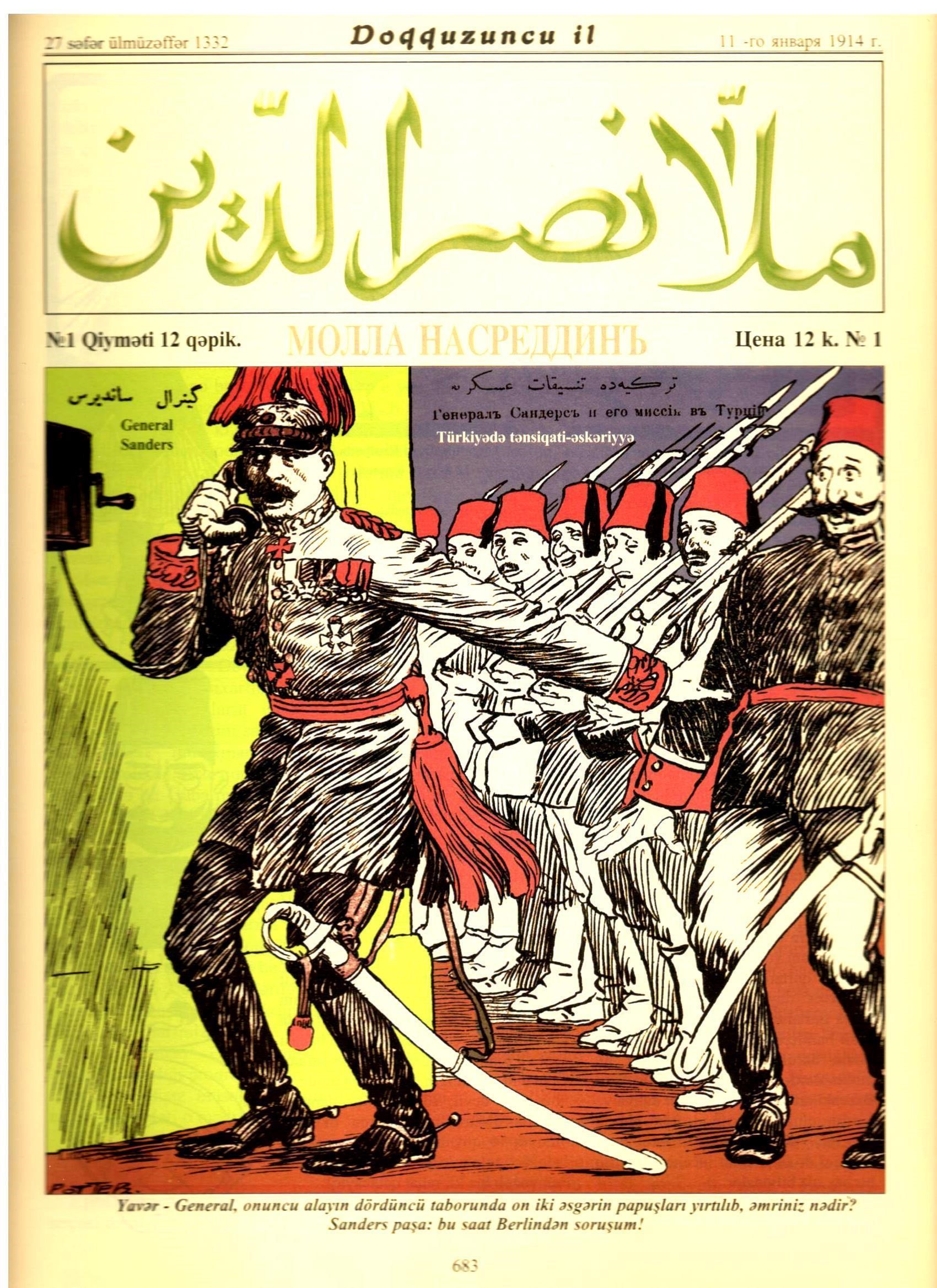 - Adjutant: General Sanders, in the fourth battalion of the tenth regiment, twelve soldiers have torn boots. What is your order

This political cartoon uses Hagia Sophia mosque in Istanbul to illustrate the influence of the Ottoman republic. 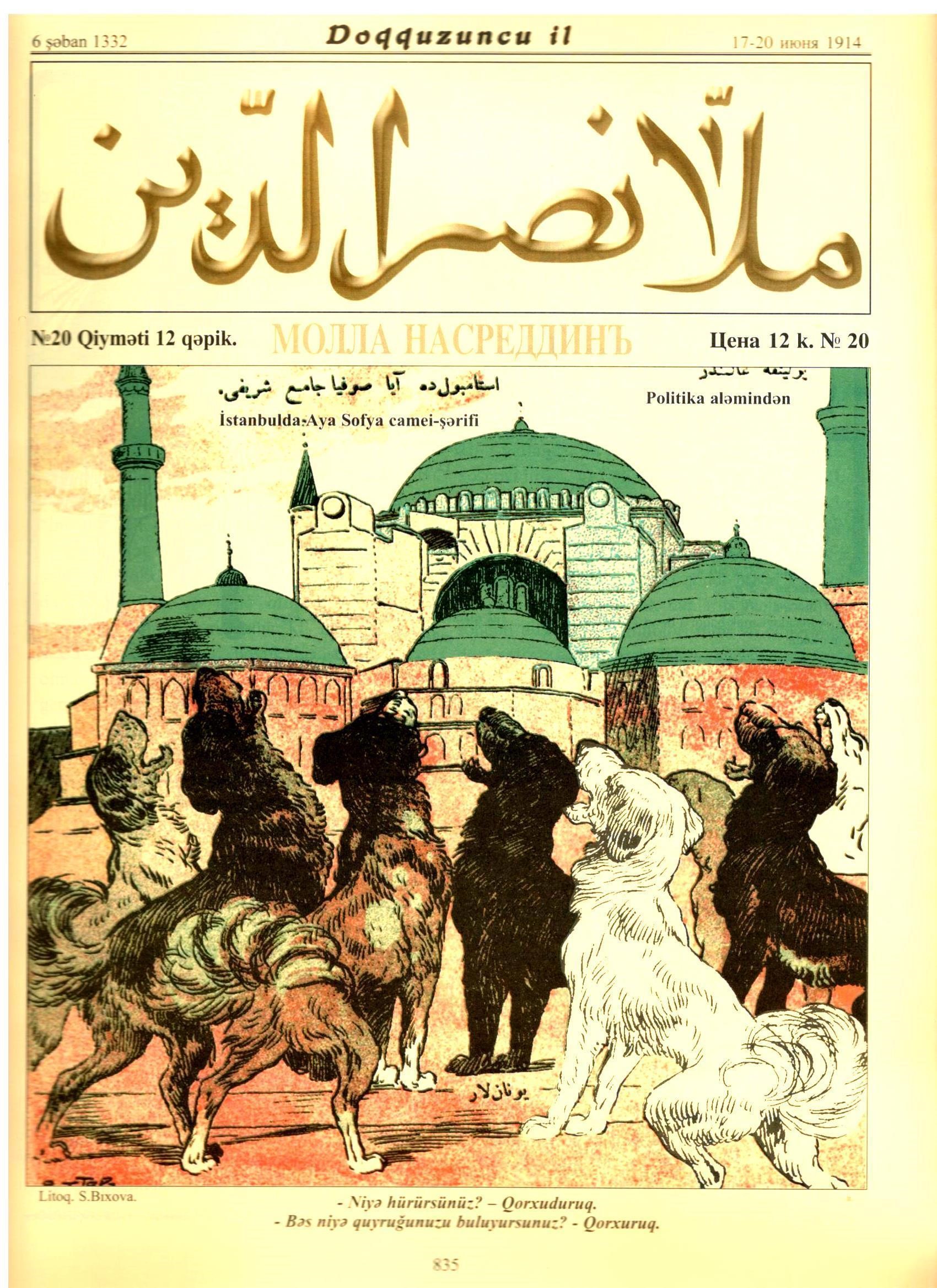 - So why are you wagging your tail? - We are afraid.

In Georgia, political cartoons questioned the motivations and effectiveness of Western diplomacy. The leaders of these countries were shown as uninterested in the Caucasus or mocked for their unwillingness or inability to decide major issue in world politics. 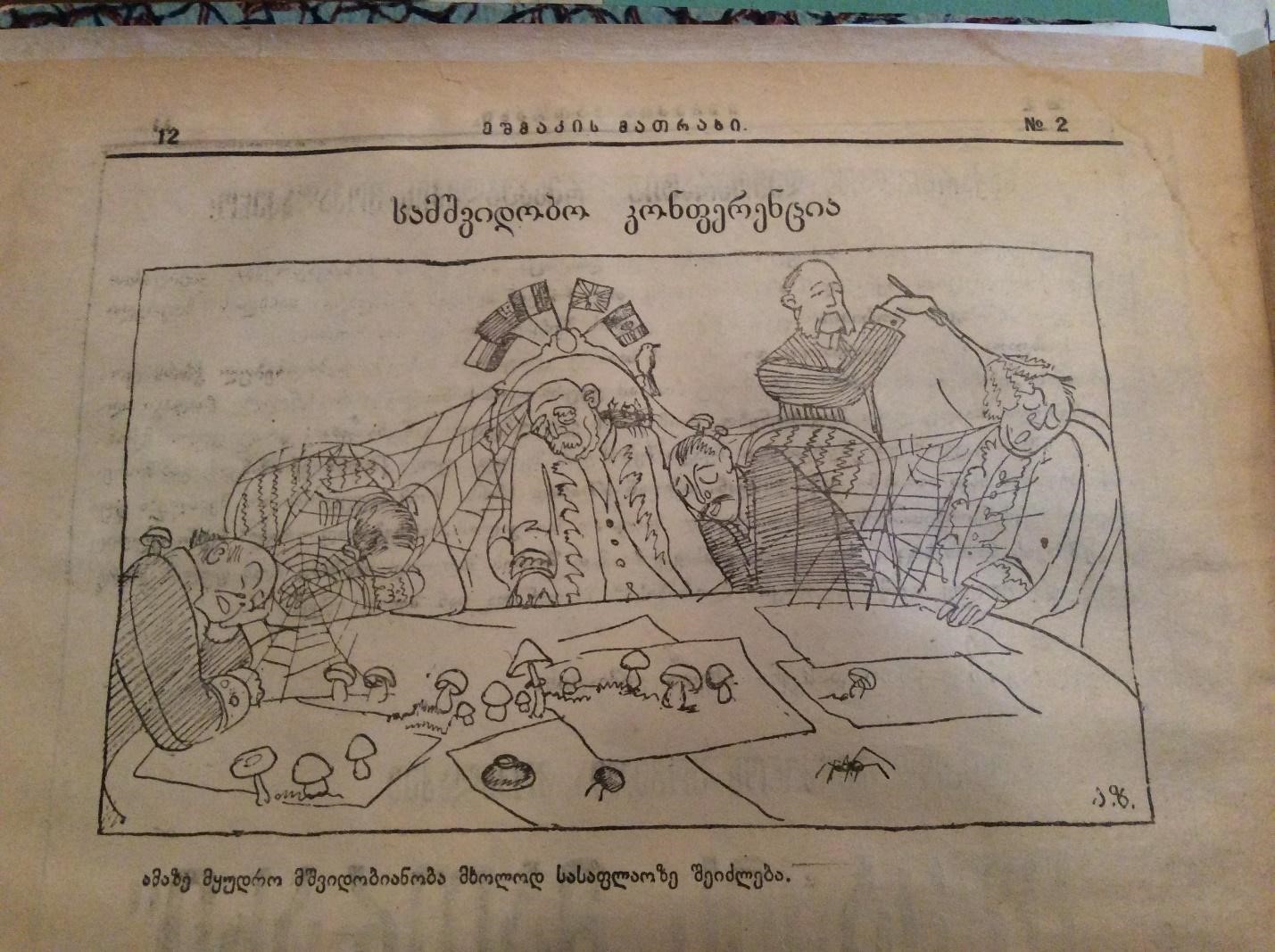 Devil’s Whip, 1920, N2. On top: Peace Conference On bottom: Only the graveyard can be more peaceful than this. 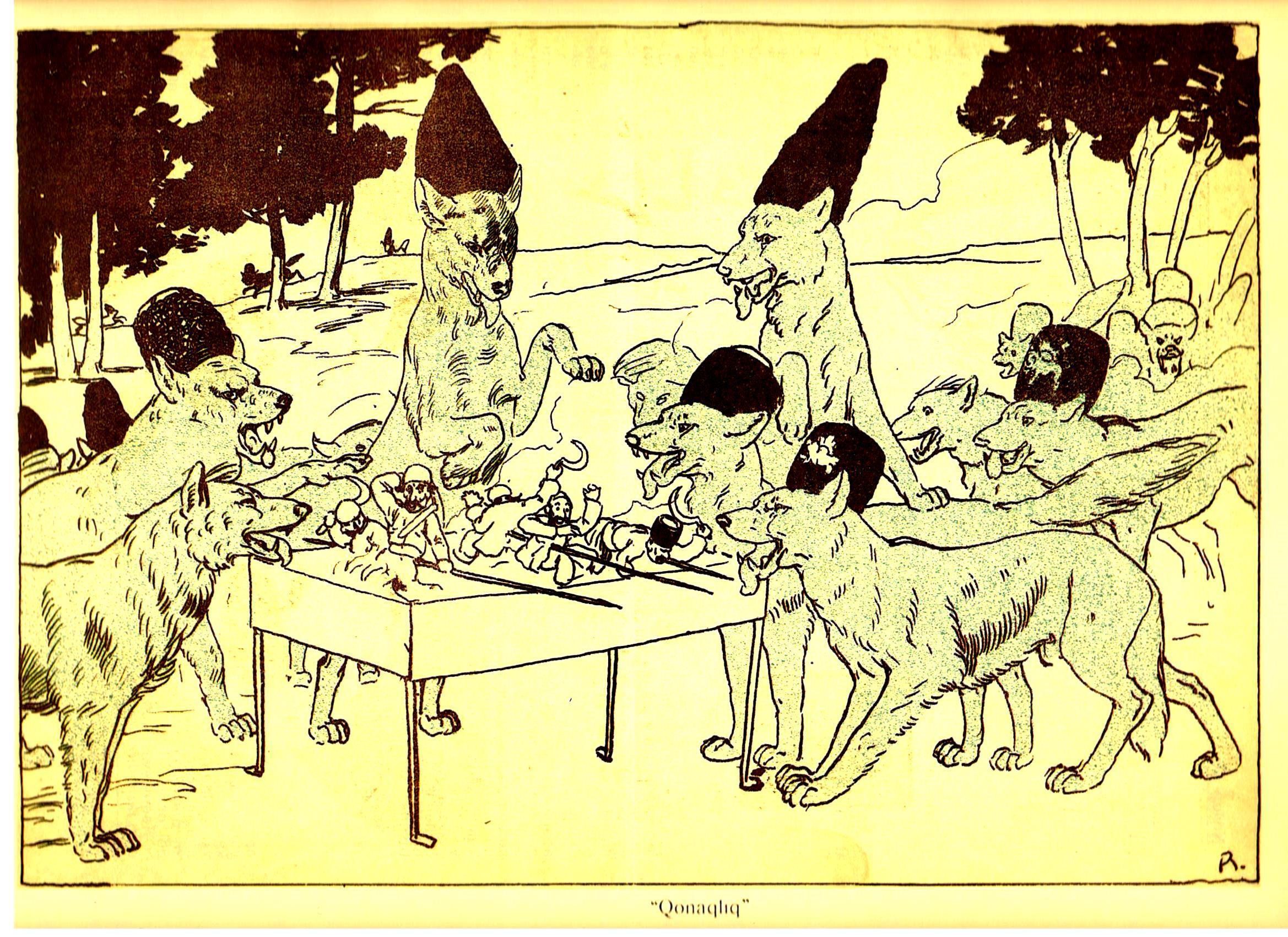 Armenian artists focused on the brutality of the massacre of Armenians by Ottoman Turkey(considered by Armenia and many countries as genocide). In 1919, Clever Davit, a weekly satirical magazine in Armenia, published a political cartoon depicting a group of men pulling another man from the hole. One asks another what he is doing, and the other responds that he is trying to raise Armenia from a bloody hole. 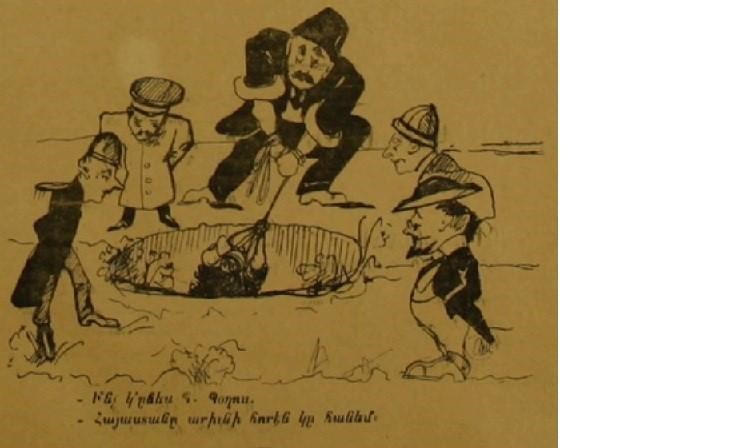 As the rich archive of South Caucasus political cartoons has been largely ignored for the better part of a century, we do not know how much influence the drawings had on public life or the politicians who ruled Armenia, Azerbaijan and Georgia at the time.

Two things are clear, however.

One, it is likely that the political cartoons had some influence over readers: once in power, the Soviet government banned drawings of political figures, according to Khvadagiani.

He noted that after the 1920s, editors and caricaturists would use photos of Soviet leaders but no one would draw his own version of a real person.

After the fall of the independent republics, most of the satirical magazines mentioned above were forced to close or radically change their editorial policy.

Two, without more data and analysis, we will never understand the power of these drawings—or the hopes of the artists who risked their lives to use their talents to change their societies for the better.

#Georgia
DONATE TO CHAI KHANA!
We are a non-profit media organization covering the topics and groups of people that are frequently ignored by mainstream media. Our work would not be possible without support from our community and readers like you. Your donations enable us to support journalists who cover underrepresented stories across the region.
DONATE NOW

A 2021 study of school children in Georgia found that 77 percent of the children are always (35%) or sometimes (42%) hungry when they come to school.

While activists note the country is making progress fighting the domestic violence, a deadly mix of cultural taboos and limited resources complicate the reform.

Persistent and present despite progress: The problem of domestic violence in Georgia