Lost voices of the Georgian Jewish communities in Sokhumi and Tskhinvali

When Silva Iosebashvili, 54, recalls her childhood, her memories are filled with the aroma of freshly baked matzah bread and fruit gardens. In her mind, she is walking with her grandmother through the neighborhood and can feel the heat of the bakery near the Tskhinvali synagogue.

Silva traces her roots back to a prominent family in the once vibrant Jewish community of Tskhinvali, a small city in Georgia’s  breakaway Tskhinvali region.

Georgian Jewish settlements in the area date back to at least the 17th century. Official data from the 1886 census indicates Georgian Jews were a majority in Tskhinvali - 1953 of the town’s 3832 residents were Jewish. By 1922, 1651 Jews, 1436 Georgians, 765 Armenians, 613 Ossetians, and 64 Russians. During the USSR, Jewish collective farms were established in the Tskhinvali region and synagogues were allowed to function.

“I remember a smell of freshly baked matzah bread in the lead up to Passover… My father loved putting me on his shoulders and we would go to our synagogue’s bakery at night, at 02:00 am. People were surprised to see a man bringing a daughter, as most of the children there were boys. I have a clear memory of bringing matzah home and laying them on a white cloth. They were delicious and the smell defines my childhood,” she says.

By all accounts, it was a happy childhood, full of the rich colors and flavors of Jewish, Georgian and Ossetian traditions. People baked Khachapuri, Khabizgin and Sarakhajin.

“The most cherished memory of my childhood is watching my Grandmother Simcha comb her hair and make two beautiful braids, which she hid under a very elegant scarf. She wore classic dresses and I loved walking around streets of Tskhinvali with her,” she says.

During the Soviet Union, her Grandmother Simcha Shaptoshvili - Iosebashvili was a representative, elected in the Tskhinvali region. “She was the only Georgian Jewish female representative elected in the USSR. She acted as a liaison between wealthy and needy families, as she ensured as much social equality among the Tskhinvali dwellers as she possibly could,” Silva says.

Silva’s parents, Luiza Biniashvili and Khaim Iosebashvili, were natives of Tskhinvali. A few days after their engagement, Luiza’s mother passed away suddenly, and Simcha became a second mother to her. She even named her daughter after her: Silva’s Hebrew name is Simcha, which means joy and happiness. 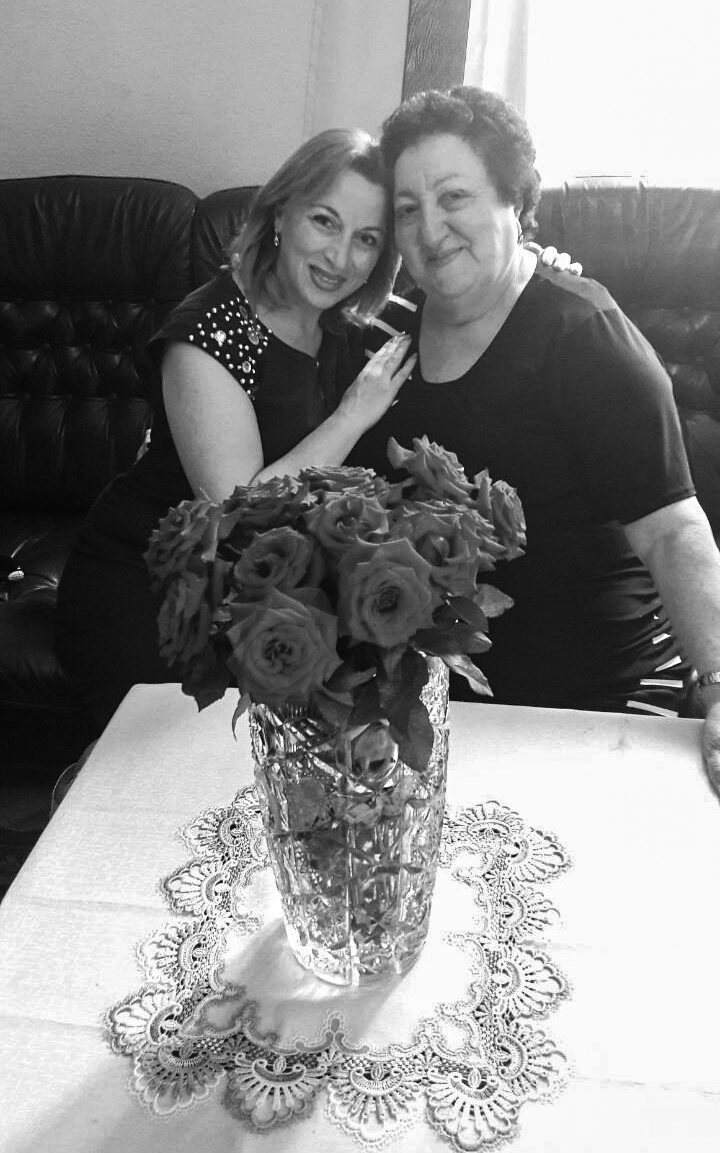 Silva and her mother Luiza, Tbilisi, 2017 Silva remembers a diverse community, where neighbors of all ethnicities lived and worked together. Georgian Jews married Ossetians; families shared recipes and attended weddings together.

Silva remembers a diverse community, where neighbors of all ethnicities lived and worked together. Georgian Jews married Ossetians; families shared recipes and attended weddings together.

“People were not afraid of repatriating to Israel [known as Aliyah]. The road was open and they left...Some of the repatriation stories were sad … there were split families … some people even stayed behind because they couldn’t leave their beloved dog,” Silva’s mother, Luiza Biniashvili, recalls.

Silva was a child when people started to repatriate.

“I remember watching them pack their whole life in a large wooden box; these boxes were shipped to Israel via Batumi,” Silva says.

“I was saddened to watch my best friends leave the country. I couldn’t understand their decision, as our family never considered Aliyah, because our life had been so complete in Tskhinvali and we deeply loved our motherland.”

At the time of the 1993 armed conflict, Tskhinvali’s Georgian Jews numbered at around 300. Eventually even Silva’s family was forced to leave.

Silva says they were one of the last Jewish families to leave the city. “in 1993, when the conflict started and tensions increased – people started leaving Tskhinvali and moving to Gori, Tbilisi or elsewhere. Georgians Jews started leaving with their families...The synagogue closed down. Our relatives and heads of the community also left,” she recalls.

“We lived in such harmony and peace with all of our neighbors that we never wanted to talk about the escalating situation.”

Eventually, however, the conflict came to them, in the shape of four armed men. The men, who arrived at their home one day, wanted their house, it appeared. Silva recalls that one promised that if the family handed over their home, he would make sure they had time to pack, and they had safe passage to Georgian-controlled territory. He also vowed to care for the grave of Rusudan Iosebashvili, a daughter who died young.

The family agreed. They turned over the house and land for $1,000 and safe passage to the Georgian capital Tbilisi.

Eventually most of the Tskhinvali Jewish community went to Israel, Luiza and Khaim joined them in 1998.

On the other side of the country, in Abkhazia, a similar scene played out for the Jewish community of Sukhumi. Despite living in the region for centuries, Georgian Jews were encouraged to leave as an aftermath of war in Abkhazia.

Like Iosebashvili, Dali Epremashvili,65, was also born into a Georgian Jewish family during the Soviet Union. She grew up in a religious family, despite Soviet restrictions on Jews and other religious groups, and she can remember her mother following many Orthodox rules.

Dali remembers her mother would make some exceptions so the children wouldn’t feel left out: on Easter, for instance, she would ask Christian neighbors to dye eggs red for her children as well.

Abkhazia’s Jewish community mainly resided in Sokhumi and Gagra. Georgian, Ashkenazi/European and Mountain Jewish communities lived peacefully in the region, with the population growing from 1982 in 1939 to 4265 in 1970.

“I have a picture of seven people, including myself, walking down the promenade (in Sokhumi): Chuvash, Armenian, Abkhaz, Russian, Greek, Georgian and Georgian Jew…this photo has become so symbolic now, because at that time, nobody cared about your ethnicity,” Dali recalls.

“I do not exclude that certain tensions existed even before the 90s, however, it never affected me. Not many people knew that we were Jewish, and they did not have to. We were friends, acquaintances and all of these had been cultivated from an early childhood. The only exception was that nobody ever came to my mother to borrow silverware, because anything related to food was taboo in our household. Being Jewish changed nothing else.”

Dali and her husband, Sokhumi, 1980s She was married to a Georgian, and decided to stay in Sukhumi, in large part because of her close relationship with her mother-in-law and her life in Abkhazia

As a child, Dali knew there was a place called Israel because her grandfather, who worked at the local synagogue, used to receive a package of Matzah from Jerusalem every year for Passover.

“It was sent from Israel as a gift and few of such boxes were delivered to the synagogue. Matzah from Israel was different from the one sold at the synagogue. Growing up, I remember being taught at school that the State of Israel was an aggressor, however, of course I did not believe to it,” she says.

It wasn’t until 1971, when a cousin decided to repatriate to Israel, that she first felt pressure from the Soviet state. “He was a successful sportsman engaged in motocross, with a very promising career. And this is why we were so surprised, why did he decide to pack suitcases and emigrate with his children?! Back in those days, he was labeled a ‘traitor.’ By all means, I did not think that way, however, I found it hard to understand his decision,” Dali recalls.

When her parents and her brother decided to emigrate, she recalls the animosity they encountered.

“In the late 1970s, I had to accompany them to the KGB and officially refuse travel to Israel, so that my passport would be annulled. When I arrived there – I felt something sinister. The chief (of the KGB) spoke to me and my parents differently, with a cold and angry tone,” she says.

Her sister was also supposed to leave, but she had married an ethnic Georgian and they decided to stay.

“When she decided to stay, her (USSR) citizenship was immediately restored and she was called a hero,” Dali says, adding that at the time, there was a lot of pressure on Jews to stay in the Soviet Union—actors and actresses used to decry those who left as “traitors to the motherland.”

She was also married to a Georgian, and decided to stay in Sukhumi, in large part because of her close relationship with her mother-in-law and her life in Abkhazia. But as more and more of her family settled in Israel, she started to travel there more often. During one trip, her sister contacted her to tell her fighting had started between Abkhaz forces and Georgia.

“The Abkhaz went to synagogue, as they knew that Georgian Jews were there. They went inside the synagogue and told them ‘don’t come out and say you are Georgian Jews; don’t you say that you are Georgians – otherwise we will burn you with them.’ So, they (Georgian Jews) were intimidated. Many Abkhaz left Abkhazia during the war, because they did not want war,” she says.

Eventually, Dali and her family settled in Israel, although she still travels to Georgia often—and still considers Sukhumi her home.

“My home is there. I regard my stay here as a temporary place of residence. I could not get used to living here…nostalgia never ever leaves me as I can’t cut off a piece of myself, because there is so much that keeps me tied (to Sokhumi),” she says.

“Each and every memory is bright. I do not hold negative memories of Sokhumi. This is how I live.” 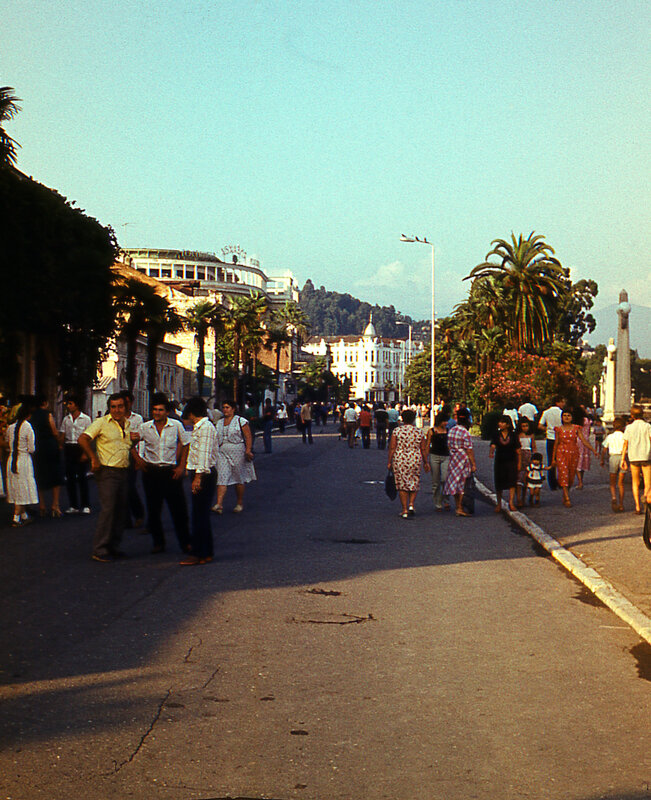 Sokhumi's coastal promenade, 1982 “I have a picture of seven people, including myself, walking down the promenade: Chuvash, Armenian, Abkhaz, Russian, Greek, Georgian and Georgian Jew…this photo has become so symbolic now, because at that time, nobody cared about your ethnicity,” Dali recalls.

#Jewishcommunity #Georgia #Abkhazia #SouthOssetia
DONATE TO CHAI KHANA!
We are a non-profit media organization covering the topics and groups of people that are frequently ignored by mainstream media. Our work would not be possible without support from our community and readers like you. Your donations enable us to support journalists who cover underrepresented stories across the region. We are currently working on the topic “Digital Footprint,” exploring how the computers, tablets and apps that now play such a pivotal role in our lives affect our wellbeing, our relationships, our communities and our societies— and what it means to live in a digital age. Your donation will be used to support our contributors working on this topic.
DONATE NOW

Hotel Iveria located in the heart of Tbilisi used to be Georgia’s most vivid reminder of war and forced migration.

Children across Georgia started school from home on September 15, the fourth semester of online education in the country since the pandemic started in March 2020.

Child and adolescent depression and anxiety grew 25 percent globally due to the pandemic.

An abandoned village movie theater has become a symbol of the cultural life of the region.

The big screen in my little town